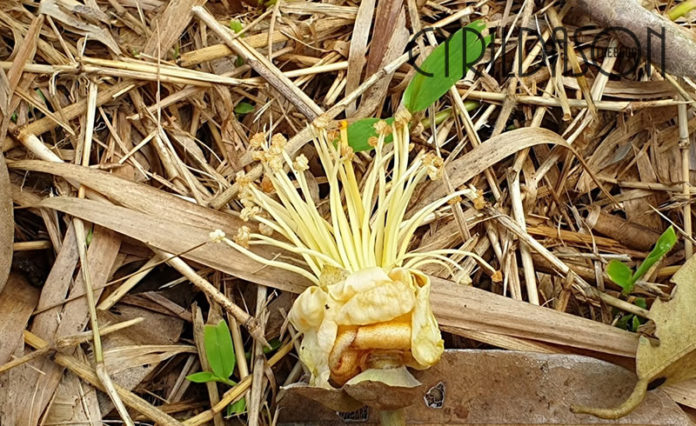 Is it wrong to love durian flowers more than the King of Fruits itself?

While many Asians, particularly Malaysians crave for durian fruits, I prefer the flowers.

Granted that the flowers usually don’t make it to local markets despite its abundance, it does not mean it is not popular especially among the Dayak.  In fact I would rate this one of the best Dayak dishes out there.

You see, durian flowers are seasonal, much like durians.

However, their lack of popularity is not due to its lack of fans, but rather the scarcity of the flowers.

Usually collected in the mornings, the flowers drop freely from durian trees on to the ground, and they only last for a few hours before they dry up under the heat of the sun and become useless for consumption.

When dry, these flowers turn yellow and aren’t as delicious. You could try keeping them in the fridge, but its ageing process is only halted for a couple of days and it still turns brown.

The life span of the flowers are therefore the main reason why they seldom make it to the markets or even restaurants. This despite the flavour it offers.

I do notice that they do sell durian flowers at the Satok Market here in Kuching, but it usually sells out by noon.  It’s also priced quite high, at RM2 for just a few grams.

HOW TO PROCESS DURIAN FLOWERS

Processing the flowers for consumption is another tedious adventure.

Before cooking it, one has to remove its anthers filament and this process is not for impatient ones.  Only the filament of the flowers are eaten. The rest are not needed because they are too hard or sometimes make the dish slimy.

The removal of the anther can take hours as it is done by manual labor, using just fingers.

As far as I know, there is no other way to do this process.

If one doesn’t remove the anther, the flowers will be slimy upon cooking and that’s not how it should be.

HOW TO COOK DURIAN FLOWERS

There’s several ways to cook durian flavor but my favorite would be to stir fry it with a mixture of shrimp paste (belacan) that had been pounded with a couple of chilies, onions, garlic and anchovies.

I know some cook it in curry, and while another person said it could be fermented after it was dried.

I’ve only tried it stir fried with the mixture of shrimp paste, and I prefer it that way.

Durian flowers is served best with white rice, but I also favor it eaten alone.

The shrimp paste mixture makes the flowers delicious while the flower itself is slightly crispy when chewed.

If chilies were added, its gives that extra ‘Ummph‘ required for a feast.

Either way, durian flowers is a very unique and exotic dish that is better than the fruit.  It also doesn’t smell.

That said, if an opportunity to try it presents itself, try it.