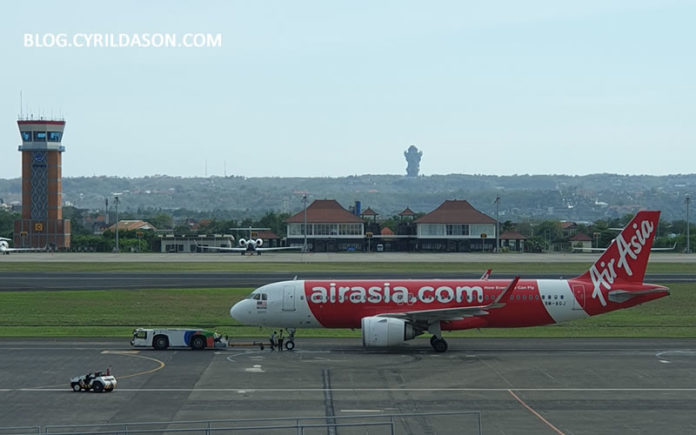 Ever experienced a lengthy or back-to-back delayed AirAsia flight?

It happened to me when I was coming home from Bali recently. After a week in this lovely resort city, it was time to go home to Kuching.

Our  AirAsia flight was at 1.55PM, with a layover in Kuala Lumpur, and later the arrival in Kuching at about 10PM.

We left the hotel at 10.30AM to avoid the holiday rush.  We completed our check-in process by 11.30AM and had two hours before the scheduled flight.

Everything looked good and we were expecting a good flight back. Our flight was a ‘fly-through’ flight, which meant that it is a connecting flight from Bali, through KL and then directly to Kuching.

It had a 3 hour plus transit time in KLIA2.  Enough time for an early dinner and to ease ourselves to the domestic gate.

At about 1.30PM, we boarded the plane.  Due to ‘parking issues’, the gate was changed from Gate 2 to Gate 3. Changing gates are common especially at busy airports like Ngurah Rai International Airport.

We headed to our seats in the aircraft anticipating an uneventful flight to Kuala Lumpur.

As the aircraft was slowly filled with passengers, I took the opportunity to have a nap because I was sleepy. I was expecting to wake up when we started to taxi on the runway.

However, when woke up at 2.00PM, we remained stuck at the gate. The captain then announced they are trying to sort some technical issues.

Half an hour later, the captain asked us to disembark, saying that the flight had been cancelled.

We disembarked knowing that we could still make our connecting flight scheduled at 8.15PM if we had the next flight out of Bali.

However, it appears there was slight chaos when we reached the gate’s main desk.

Apparently, the flight consisted of many connecting passengers so everyone swarmed the AirAsia ground staff for clarification on the flight.

The AirAsia staff on duty tried their best to handle everyone’s questions, but seemed to have avoided using the PA system which would have made things easier for them.

Instead, they shouted out instructions leaving a few passengers disappointed and confused of what they were supposed to do.

Since there was no queue, I joined the chaos at the counter trying to get the attention of an officer who was busy re-booking flights.

At this point, I was shoving my boarding pass while saying ‘Kuching! Kuching!’, taking opportunity by the fact they seemed to be more concerned about passengers with connecting flights on AirAsia.

I was anxious about the fact we would miss our connecting flight to Kuching. The staff on duty didn’t seem confident in handling the situation.

They did put out a queue line later, but people were still cutting queue. There was lack of proper communication and they didn’t use the PA system to get any message out. There were however 4-5 AirAsia ground staff on site.

Eventually, everything was sorted out. We were placed on an AirAsia X flight, schedule to depart at 5.45PM.

The connecting AirAsia flight to Kuching was scheduled at 9.45PM, giving us an hour plus to catch the next flight at KLIA2.

The new flight moved us from Gate 3, to Gate 9A. The Gate was again changed to 8 due to aircraft parking issues. That’s twice in a row and I read it as a bad sign.

This flight was a big A330-300 aircraft, and I was hoping this was the end of the whole delayed/canceled episode.

This flight was delayed by 40 minutes due to ‘baggage issues’.

I later learned that the ‘baggage issue’ was due to a family which had to disembark the flight as their daughter had flight anxiety.

They delay meant we had shorter time to transit in Kuala Lumpur. 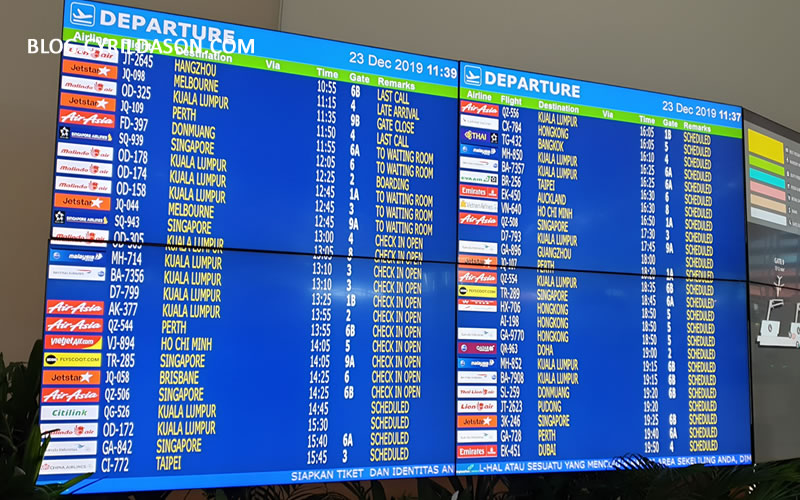 The Korean and Malaysian AirAsia stewardess I consulted prior to landing helped inform their ground staff about the delay, and assured us that all will be arranged.

We landed at 9.30PM.  This meant we had less than 10 minutes to reach our gate for or flight to Kuching.  Those who use KLIA2 frequently would know that the distance between the domestic and international gates are huge.  One needs more than 30 minutes to run in between!

Despite that, the AirAsia stewardess and also their ground staff were optimistic that the flight to Kuching would be delayed so that we could board.

With that notion, we ran our hearts out to the new gate upon disembarking. I carried my 16KG, 5 year old daughter as we ran. The AirAsia ground staff were shouting to connecting passengers to Kochi, but nobody seemed to bother about the five of us to Kuching.

Along the way, I asked two AirAsia ground staff which seemed to be handling transit passengers about if we could make it, and they gave us positive responses.

Nonetheless, despite running all the way from the International terminal of KLIA2 to the Domestic Terminal at Gate J11, we missed the flight.

We asked the AirAsia ground staff at the gate what we should do next, and was instructed to go to the baggage info office.

When we reached the baggage info counter, the officer told us that we can still catch the next flight out of KLIA2 at 11PM.

He however said that our checked-in bags won’t be able to travel with us and will likely only arrive the next day.

He advised us to catch the flight and not worry about our checked-in bags. We decided to heed his advice. He then asked us to go to the AirAsia Service Counter which was at Level 3 of the airport.

Now, what annoyed me was that I can only reschedule my next flights at the customer service counter which was at the check-in area of KLIA2. This meant I had to exit the terminal building, go to Level 3 and and go through the whole immigration and check-in process.

When I reached the the AirAsia counter, an AirAsia relation officer helped expedite my case to the customer service officer at the counter.

He did this after acknowledging that I could still make the 11PM flight, especially since the flight had been rescheduled and delayed to 11.25PM.

The customer service officer however noted that the bags will not be able to make it together with us and we should make a claim at Kuching International Airport.

We got our new tickets sorted out by 10.30PM and rushed to our boarding gate at K10.

When we arrived at gate K10, passengers of the flight were still outside of the waiting lounge.

At 11PM, all of us were allowed in the waiting lounge.

Despite expecting to board the aircraft minutes later, we were left stranded at the waiting lounge with our supposed plane no where to be seen.

This was yet another delay!

At about 12.20AM, our flight finally arrived and we finally boarded the flight for Kuching.

According to the captain, the flight was delayed because of the late arrival of the aircraft. Duh, obviously!

At around 2.30AM, we finally reached Kuching International Airport.

I rushed to the baggage claim to make a report on our luggage.

Since my daughter was already sleeping, I wanted us to reach home the soonest we could.

The customer service officer at the baggage claim however told me check the baggage carousel first.  He said KLIA2 remarked that they managed to slip in our bags into the flight to Kuching as it was delayed.

True enough, our bags came out shortly and I immediately booked a Grab XL for home.

The ride home was much welcomed and we arrived safely at about 3AM, ending our long 12 hour flight delay and cancellation ordeal.

This is the longest I’ve been stranded at an airport, and I do not hope it to be repeated again next time.

It also gives me a reason to look into travel insurances next time just in case I encounter yet another delayed AirAsia flight.

COMPENSATIONS FOR A CANCELED OR DELAYED AIRASIA FLIGHT

I checked with the Malaysia Aviation Commision (MAVCOM) and these two scenarios were stated:

Based on that, I assume that AirAsia had offered an alternative flight or a full refund to me when the incident happened, and they had also been responsible to transport me and my family to our final destination (Kuching) at no additional cost.

To learn more about rights when flying with Malaysian based airlines, do check out MAVCOM’s site.