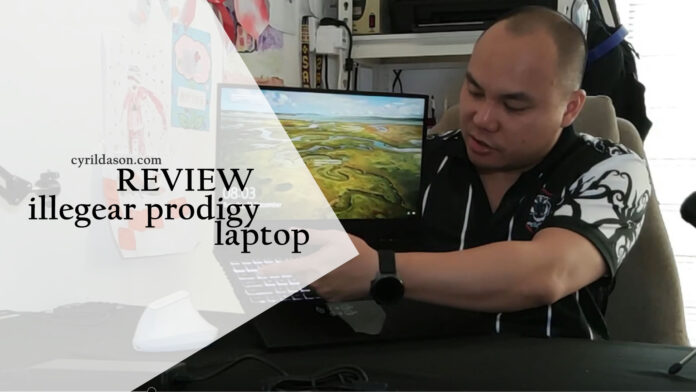 As I mentioned a month ago, I had decided to buy the Illegear Prodigy laptop after considering a few other laptops in the market.

This is my first Illegear laptop and it is the most expensive laptop I’ve ever owned to date.

Before I bought the laptop, I made a quick chat with the Illegear team, just to address some of my concerns which included delivery, warranty and also spare parts.

Just so you know, after much discussion with the Illegear team, I decided to add on a few items such as an extra ‘on-site warranty’ for two years, and ‘180 days zero dead pixels’ for the monitor.

Before I tell you what I liked about the laptop, and what I didn’t, here’s a brief on the laptop specifications.

As you may had noticed, I got a few items upgraded for free, namely the battery, the 1TB SSD hard disk, and the kryonaut thermal greased.

ILLEGEAR PRODIGY REVIEW: WHAT I LIKED

I start of this Illegear Prodigy review with the fact that the price of the laptop.

At RM6K, it already tells one that it’s not an ordinary laptop.  That literally means there’s plenty of great things about this laptop.

Here’s the list of things I loved about this black coloured laptop.

First impressions are important, so the Illegear Prodigy does that handsomely.

The minimalist design makes the laptop stand out and I loved how it looks and feels.

The Prodigy feels strong when carried around, and everything seems to be well assembled.

I like the matte finish on the palm rest, and while the cover does seem to get smudged easily, this isn’t a concern to me.

While the laptop has a 15.6-inch screen, the laptop isn’t at all big.

The size isn’t any different from many flagship models of similar size although it is slightly thicker.

A key reason why I went for the Prodigy versus the Ionic was due to the single-zone multicolor keyboard.

I am not so crazy about the multi-coloured keyboard, but the single-zone keyboard was important to me.  Yes, it increased the size of the laptop, but I do find more comfort using this type of keyboard.

The ability to adjust the colour of the keyboard backlit is a bonus, and I noticed the backlit automatically goes off to conserve power if you hadn’t used it for a while.

That said, the keyboard is responsive and I like it.

TYPE AND NUMBER OF PORTS

The Prodigy has an adequate number of ports. There’s a total of nine ports.

Perhaps I forgot to mention that I actually opted for the faster processor for this laptop because I am hoping to only need to change to a new laptop in five years.

Video rendering is fast, and games are smooth. The former is more important to me.

This laptop is a definite upgrade from my older one and I really have no complaints over its performances.

Having THX® Spatial Audio in the Prodigy’s audio system really brings a whole set of difference to music quality.

Music was sharp and crisp, and it was indeed a joy to listen to.

I’m usually not too bothered with audio quality, but the stark improvement in terms of audio quality produced by this laptop is hard to miss and ignore.

The only game I am currently playing is FIFA 20, and I can see the difference in terms of graphics.  The graphics on the Prodigy is miles apart from what I used to have on my old ASUS laptop.

This is largely expected since this laptop runs on the Nvidia GeForce RTX 2060 6GB GDDR6 with Optimus graphic card.

But on top of that, the sharpness of the image was simply brilliant.  Player faces look more real like, and playing the game was also much more enjoyable, perhaps also thanks to the 144Hz refresh rate of the screen.

But that’s not all.  The screen colours are vivid and accurate, almost perfect in my opinion.

The 15.6 – inch screen does look odd since there’s a huge gap under the screen (which I thought would be perfect to fit the Illegear logo), but I can’t complain since it’s just nice to my eye level.

Other than that, there’s nothing more I can say about the screen.

This is probably not part of the laptop, but it is important.

If you read on below, you’d notice I had some issues with my laptop prior to accepting it.

I contacted Illegear’s customer service, and they got back to me within 24 hours, trying their best to address the issue.

It was good to know that they are responsive and this is something I believe is worth noting to all of you.

ILLEGEAR PRODIGY REVIEW: WHAT I DISLIKED

Not everything is rosy with the Illegear Prodigy.  There’s some components of the laptop needing improvements, and here’s the list of things I felt weren’t any better than my Asus laptop.

Despite using Kryonaut thermal greese, the Prodigy gets heated pretty fast.  The experience isn’t great because the warmth hits the left side of the palm rest, and also affects the keyboards which felt warm at every keystroke.

Underneath the laptop was also hot, so I wouldn’t recommend putting the laptop on the lap when gaming.

Perhaps Illegear designed this laptop with the idea that the laptop would usually be used on a table.

I am very particular about the weight of my laptop, so when I learned that my Prodigy would weigh about 2kgs after the upgrades, I was less ecstatic.

However, I persuaded myself that 2kg is nothing upon clicking the ‘BUY’ button.

Unfortunately, upon getting the laptop, the weight of the Prodigy is hard to miss especially if you are lifting it with one hand.

The charger block is huge and heavy.  It’s a good… kg. I don’t know about you, but if I’m packing for a trip, this will definitely add weight to the backpack I always carry.

Aside from being huge (almost 15 X 7.5cm), the charging block also gets pretty hot when plugged in.  There’s also no indicator on the block to show if there’s power flowing through the block.

While I like the fact that the Prodigy has a lot of ports, I wasn’t crazy about where they were located.

The USB Ports were located nicely at the side of the laptop, but the HDMI, power supply port and USB Type-C ports were all located at the rear of the laptop.

Since I liked to lift my laptop (presumably looking for papers that likely went under my laptop), these port, or whatever is attached to them, could be damaged.

I guess this is a personal preference, but I like the ability to see what’s connected to my laptop.

During normal office use, the Prodigy is pretty silent.

However, upon switching to games or rendering heavy videos, the noise gets boosted.

I played FIFA20, and I would definitely say that there’s a significant increase in noise. It is rather loud, so there’s no way to ignore it.

I’m not sure if this is exclusive to my unit, but the battery life of the Illegear Prodigy is bad, at least by my standards.

While I was upgraded for free to a 63WH battery, the battery doesn’t last as long as I felt it should.

In fact, a full charge, which would take over two hours to complete, would only last for about two hours.  This is under normal office use; typing, music, surfing.

I brought this matter Illegear, and they confirmed with me that the Prodigy laptop that’s powered by a 43WH battery should last for about 3 hours.

Mine mysteriously used up so much power despite having a bigger battery.  The support staff named Ben helped me to do some tweaks, but it didn’t solve the problem.

Finally, I ended googling online and tweaking this and that, and got over 5 to six hours worth of battery life on basic power setting. This however was not consistent, with the laptop still showing about 3 hours of battery life sometimes.

Being able to lengthen the battery time was a relief, but to be honest, the need for me to even tweak the settings to prolong its battery life is something very, very disappointing.

Probably some of you skipped here immediately, but if you were counting, there six things I disliked about the laptop, versus eight things that I liked.

This means it’s a win for the Prodigy.

However, to be entirely honest, the Prodigy failed me in two major things when I shop for a laptop, namely weight and battery life.

I’m constantly on the move and I do more office work than gaming or video production.

Because of this, having a laptop which can last at least eight hours on battery power is vital, and having one that’s lightweight is also critical.

That said, I will likely not buy another Prodigy from Illegear in the future and probably try out the IONIC instead.

But that’s five years in the future, and this verdict is based on my usage.

You might have a different opinion about my Illegear Prodigy review especially if you are a gamer that wouldn’t mind the weight and battery life.

If so, grab the Illegear Prodigy at promotional rates on Lazada here.

Also check out the video of my Illegear Prodigy review below.

Here is where I update you on what’s on-going with my Illegear Prodigy laptop since I own one.  This section will be updated as it happens.

14.07.2021 – Battery can’t retain power. Down at 50% capacity. Contacted Illegear and they assured I can get the battery replaced for free. Delayed sending the battery due to work.