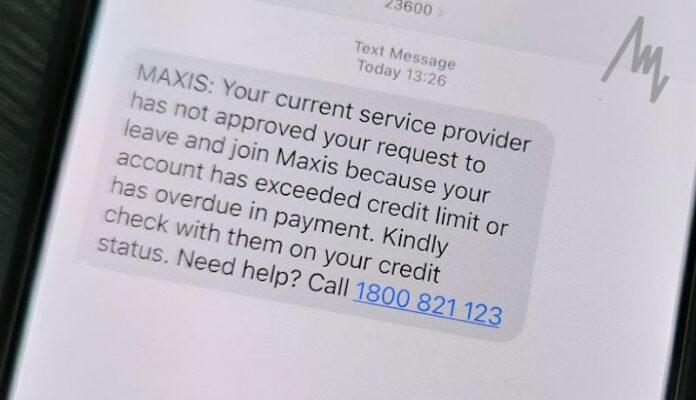 This week, I decided to port – out of Maxis, the Malaysian telco famed to be associated with green.

Why am I blogging about this you may ask?

Well, for one, I’ve been with Maxis for years (since 2014 if I remember correctly), and secondly, despite porting to numerous telcos in the past (which I did share on my social media accounts), I’ve only actually ported out my private number, which is my second line, and not this particular line, which is my main line.

That said, porting out from Maxis this time around is significant for me and I am here to share about the process as well.

Why did I decided to port – out from Maxis?

Maxis has always been known to be more expensive among the major four telcos in Malaysia. However, I stuck with them because they provided reliable service.

Reliable in the sense there was less disruptions to their network and service, and they also had one of the fastest download speeds in Kuching at one point over mobile internet.

A couple of years ago however, their ‘fastest download speed’ in Kuching seemed to have dropped. I couldn’t get the speeds I used to enjoy but I stayed on regardless.

However, over the last few week (perhaps could of months), the quality of their internet coverage seemed to be even worst.  From no signals, to no internet connectivity. It was just annoying. 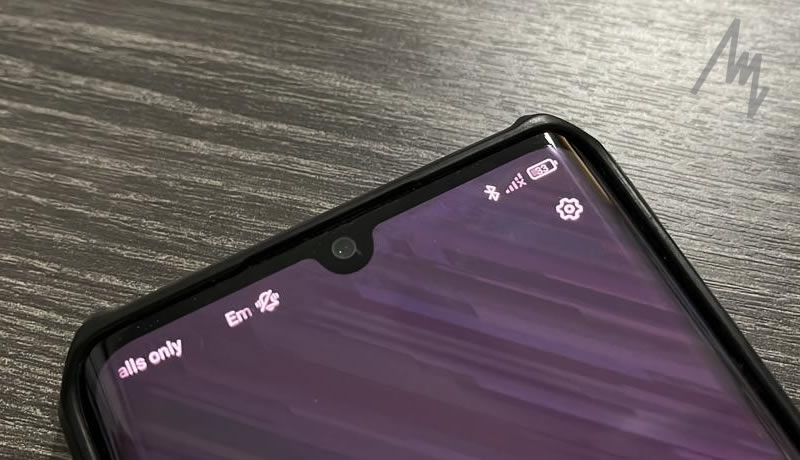 Sometimes, there was 4G planted on the service bar, but I couldn’t even surf on the internet. It was getting annoying and disappointing.

I could have held on, but I also want to get a sub-line for my daughter since she needs one to communicate with the family.

Maxis was charging RM48 for a sub-line, while Digi happened to offer such service at a promotional rate of just RM20/month.

On top of that, Digi coverage was way better (albeit still horrible) in Kampung Duras, which is my wife’s village, and they had a post-paid plan that was only RM60/month with 30GB internet. 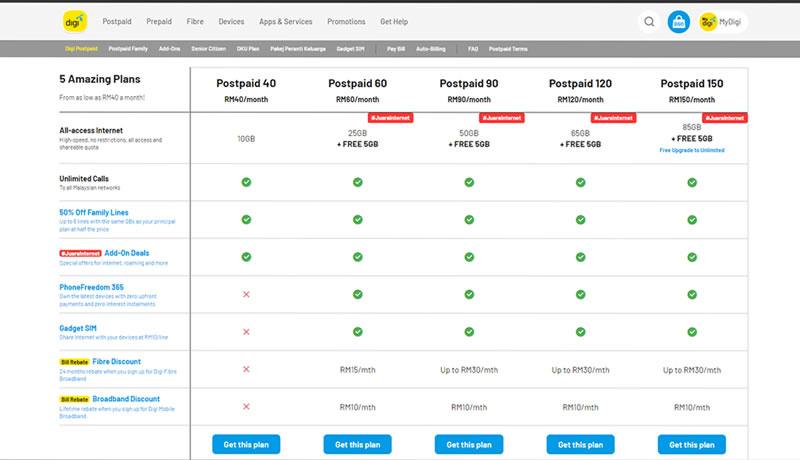 Maxis’ lowest post-paid was RM98/month with 40GB. That’s a RM38 difference which I could use to add in more data or a sub-line!

Considering all the factors, I decided to end it with Maxis and do the switch.

It was not easy porting out of Maxis

And so I went to Maxis on Wednesday, 24th November 2021 to ensure my account was clear and that I could port-out from Maxis. I was cleared of any contracts and so I then went to a nearby Digi Centre and requested to port in to their services.

Digi told me the whole process will take 24-48 hours to complete and gave me a SIM card to use when the termination was completed.  I would need to reply YES to the termination request.

However, after 24 hours, Digi called me to inform that my port-in was declined by Maxis because there was a contract.

I called Maxis to reconfirm on this and they said there was indeed a contract which would expire on 8 December 2021.  I guess the Maxis staff had mistaken the month of the contract expiry and gave me wrong information.

Since the Digi promo ends on 30th November 2021, I couldn’t wait. Therefore, I called Maxis to get the contract nullified and had Maxis charging me a penalty of about RM5 to terminate the contract. I paid it in full.

Upon termination of the contract, I requested for another port-in to Digi with the new telco.

However, again, after 24 hours, I did not received any calls or SMS, so I got in touch with Digi again.

Digi confirmed that my port-in to Digi was rejected again because I was still under contract.

I was annoyed because I felt this was impossible (as I’ve just confirmed the contract is null), and so I contacted Maxis again.

The customer service then told me that once a contract is terminated, it takes 24-hours for it to be reflected in the system. (Zaman komputer macam sekarang pun ambil 24-jam?) He then said that I can now port-out as it has passed 24 hours.

Dissatisfied, I tweeted about it and Maxis responded by DM to ask about the issue.

After I replied, I that night I got an SMS asking if I was really keen to port out from Maxis. I replied YES, and the automated SMS said ‘Thank You’.

This is not my first time porting out of a telco, so I wasn’t surprise to get a call about 10.56AM the next day from Maxis.

This was typical of telcos when one tries to port out. A so called ‘maxis specialist team’ called to offer me lower internet data for just RM40/month. This was way below the RM108 I was paying now, but I declined.

She then asked why I was porting out, and I told her about the quality of service they had been providing.

She countered that I didn’t make any report. I also countered by saying I’ve made reports to you previously and the issue was never fixed for the past five years. On top of that, the network issues I’m experiencing isn’t at one location, but when I go around Kuching.

She then said, “why not give Maxis a chance” and they will open a report about the issue and rectify it.

I declined and said I was loyal for years and that their service had dwindled in terms of quality, so I want to move on.

She then said she will just open a report on the quality of service in Kuching in which I said “OK”.

To be honest, the whole process to ‘break-up’ with Maxis literally feels like you are ‘breaking-up’ in a relationship.

An hour after the Maxis call ended, I contacted Digi to ask about the status of my port-in.  I asked them on twitter, but they weren’t responsive, so I went to their app and had a chat with a ‘Live agent’.

The confirmed that the ball is now in Maxis’ hand and I had to wait.  Tried getting a hold of Maxis via Twitter but there wasn’t any response. (The did eventually respond after it was all settled). 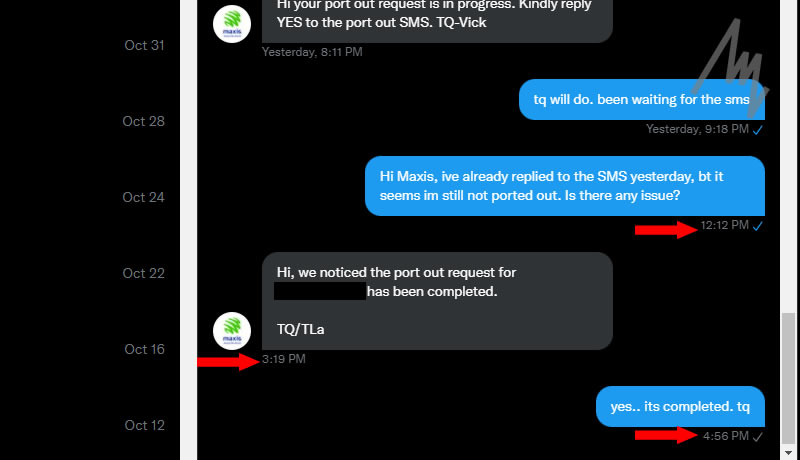 At about 1.30PM, I tried calling their customer service at 123, and while it got connected after the first ring, the second one got disconnected.  Then my Maxis line went empty, and I knew that I have now ported out.

That same time I received a message from Maxis saying my port – out wasn’t successful as you can see below. 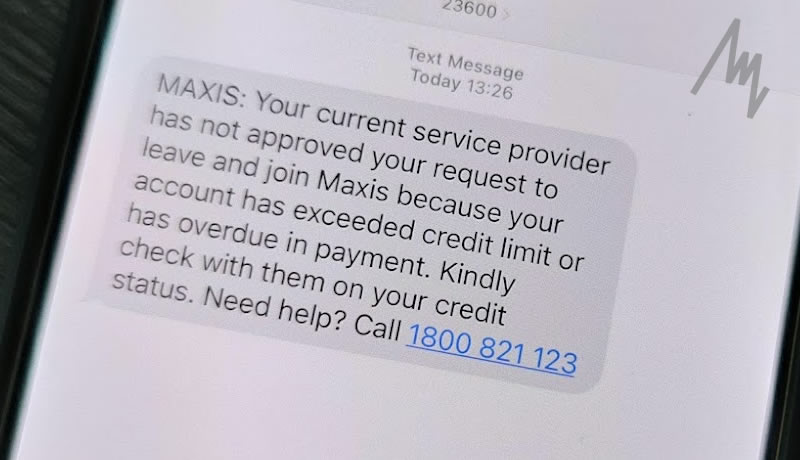 However, the lost of signal was a sign the port – out was successful, so I am unsure why there’s contradiction info.  Like I say, Maxis seems a bit haywire these days and hence my decision to leave.

I slotted in my new Digi SIM to my Android phone and welcoming messages started coming in. 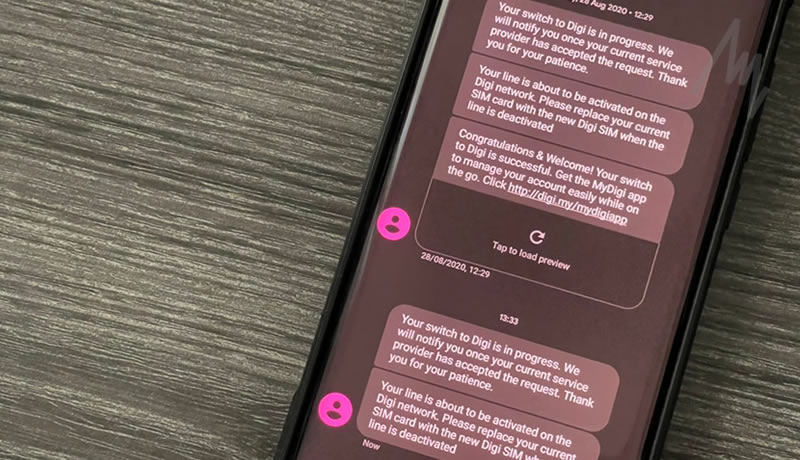 Since my iPhone is using eSIM, I headed to a nearby Digi service centre to get my eSIM and also get the sub-line for my daughter, which included a new smartphone.

Her old smartphone battery is damaged and the there’s a button which can’t be pressed anymore. 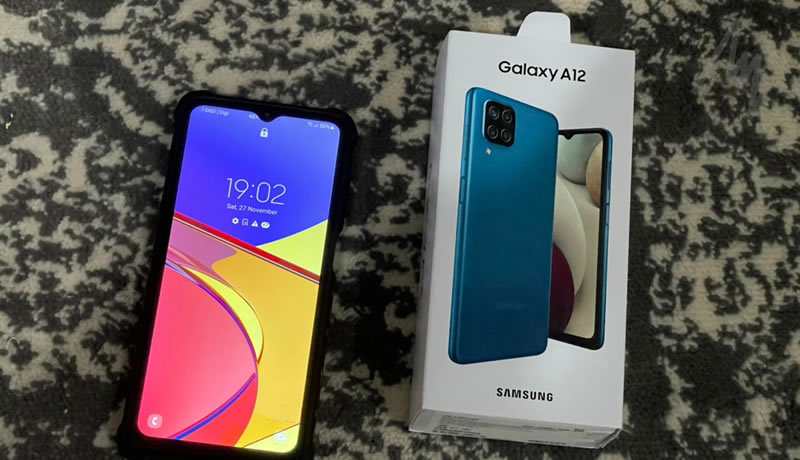 Paid the dues, tied myself to a year contract to get the device (which was cheaper if I did) and now I am officially using Digi as my main line.

Will not stay loyal if the service sucks

To be entirely honest, no telco is perfect.

I think this is why I stayed so long with Maxis despite their shortcomings.

However, if the problems don’t seem to go away, and seem to get worst, there is need for change.

I pay good money to get good service, and I work hard to earn money.  That said, I don’t believe and agree when someone says ‘It’s better than none’ when I paid so much for something.  I believe I deserve the best for what I paid for.

The switch to Digi is for one year, but if Digi also doesn’t perform after that, I might just jump over to another telco because there is no such thing as loyalty in brand these days.

When it comes to service, we go for who can give us the best service at the lowest cost, and if there is ‘special perks’, it must or better come in terms of better service and quality and not freebies.