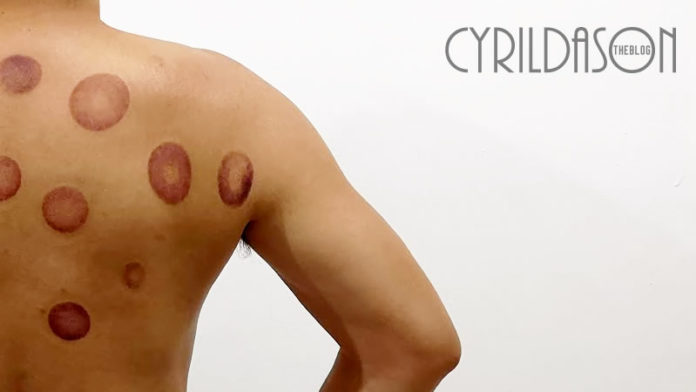 Cupping therapy in Kuching, or ‘bekam’ as it is known in Malaysia, is a traditional Chinese therapy.

According to Webmd, “Cupping therapy is an ancient form of alternative medicine in which a therapist puts special cups on your skin for a few minutes to create suction.”

Anyway, I did not intentionally want to do cupping therapy upon my visit to my usual masseuse yesterday, but she somewhat felt I needed it, and she didn’t charge me extra for it.

So this was my first experience with cupping therapy.

The one I went through was the dry cupping therapy. It was pretty basic and clean, leaving only black/blue marks on my back.

I am made to understand the wet cupping therapy was messier as the therapist would need to cut the skin to allow blood to flow out into the cups.

According to the belief, cupping therapy helps with pain, inflammation, blood flow, relaxation and well-being.  It is also said to be a type of deep-tissue massage.

How true, I don’t know, but athletes like Malaysian swimmer Pandelela Rinong, US wimmer Michael Phelps and US gymnast Alex Naddour do go through such therapy.

Cupping therapy became ‘a thing’ during the last 2016 Rio Olympics and was quite hotly discussed online.

HOW IS CUPPING THERAPY DONE

Cupping therapy in Kuching is done pretty easily. Olden cupping therapies will require your therapist to put a flammable substance such as alcohol, herbs, or paper in a cup.  These substances are then set it on fire. As the fire goes out, the cups are placed upside down on the back.

However, the one I went through used modern equipment which does not require the use of fire.

Suction was created using a pump.  What the therapist did was put the cups on my back, and started sucking out the air to create a vacuum.

Sure, there was some slight pain during the cupping sessions.  The pain was however manageable and largely due to the skin being sucked up into the cup.

The pain only last a couple of minutes, and all was well after a while.

It did feel rather odd having cups stuck on my back, but I was intrigued by the possible results.

SIDE EFFECTS OF CUPPING THERAPY

After the cups are removed, there’s dark blue or black circles on my back, as you can see below.

According to my therapist, the darker circles meant that that specific areas had more ‘angin’ than others.

Interestingly however, I also noticed that some annoying pain I did feel on my shoulders for the past few weeks was gone. It is not completely gone, but it feels better than before.

I’m not sure if the pain is gone because it’s a physiological thing, or because the muscles and blood circulation has improved in these specific areas thanks to cupping therapy, but it is gone or so much less.

As far as my experience tells me, there’s no other side effects so far after my cupping therapy in Kuching.

HOW MUCH DOES CUPPING THERAPY COST?

I can’t answer this question because I was not charged for my session. As I mentioned before, I went to my regular masseurs to have a good two hours body massage.

She however decided to do cupping therapy while I was getting the massage, and she didn’t charge for it.

I also didn’t bother asking, so I can’t really tell you here. If you do know the rates elsewhere, do share and I will update this post accordingly.

Anyway,  if you’ve ever tried cupping therapy before, why not share your experience. Mine’s pretty good so far.