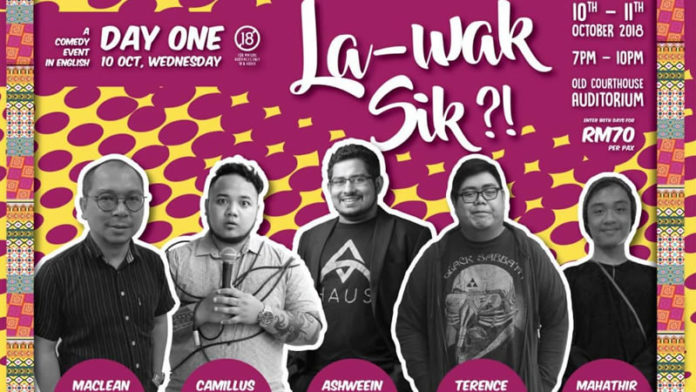 Local Kuching comedians are a rare breed but it is La-WAK by HAUS, Jom TEH!, and What About Kuching (WAK) that can definitely change that.

With five local Kuching comedians based in Sarawak, the event showcased fresh local talents from Kuching which are Terrance, Maclean, Camilus, Mahathir, and Ashweein.

All of these very talented comedians pulled out all the stops to link every Sarawakian daily habit to something that could be made a joke.

It was a very fresh perspective since I rarely get to see local Kuching comedians on stage. Ther jokes linking the indigenous communities of Sarawak and related issues were almost perfect.

A few examples included when Terrance made jokes about himself being a result of the popular inter-marriage culture in Sarawak and how he had to deal with it. He then related it to other Bumiputera related jokes which resonated well with the mixed over-18 crowd at the Old Court House.

Maclean likened Facebook to staying in a longhouse and how the experience itself was quite unique in his very own perspective. He also made funny remarks on the current education system including a joke involving a recent headline making news.

He made it a point to also talk about mental illness and what could be done to get help.

Mahathir on the other hand belted out jokes revolving around life as a Malay Sarawakian and told a very funny piece about girls in Sarawak.

His stereotypes joke worked wonders despite the obvious nervousness he also admitted on stage.

US educated Camilus joked about how he was treated abroad and how Sarawakians do not look like Asians. His elaborate jokes on the different between West and East Malaysia definitely cracked the hall with laughter.

The only Indian and probably non-Sarawakian (but now stays in Kuching), Ashweein told the crowd about his experience when he first came over. His joke about the term ‘tambi-gelé’ was a total hit because it was simply a very typical thing that happened in Sarawak a lot. I personally loved it when he told it about his experience in the stadium and the relation it had with the word ‘Tambi’.

Ashweein’s show ended the 1st night with plenty of hope for the Sarawak and Kuching stand up comedy scene.

Also, I’m quite sure you won’t find what I wrote above nearly close to being funny because I can’t exactly tell you the jokes in detail, nor would I want to record them. You just have to wait for the next comedy show and be there to experience it.

They have the credentials and stand up comedy contracts to back them up and were a level above the locals definitely, having done stand-up comedy for a while.

The emcee of the night was Papi Zack and he was just hilarious!

I don’t think I need to say much about their show, but I did some short recording of the harmless jokes they had.

Of course I can’t put the whole video of the jokes, but if you hear me laughing, it meant the jokes were good. This was just the tip of the icebearg to be honest. There was even more good one.

Some of the jokes were threading thin on that fine racist line and it wouldn’t be accepted by those owning those very ‘thin’ mudah terasa hearts.

So if you intend to check these Angry Indians, be very sure you are not easily offended.

Anyway, La-WAK Sik was a very good effort and I personally laud the organizers for the effort. It is my hope to see more local Kuching comedians in the future.