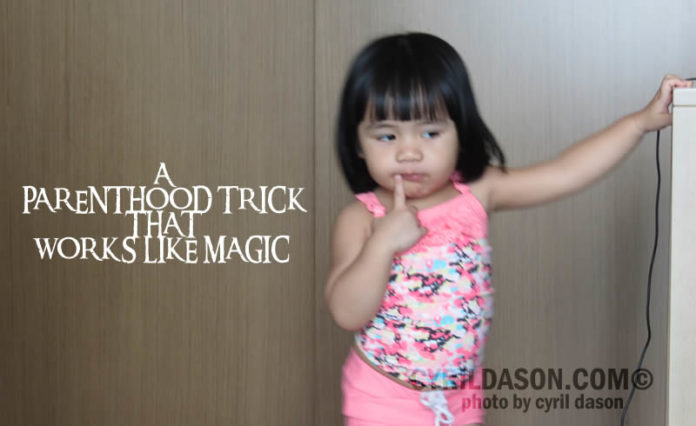 Sasa has been coughing for a quite sometime now. It’s an on and off thing, and I can’t really say how long this cough of hers has lasted because there are times it’s like it’s over, but then in a couple of days, she’s coughing again.

When she coughs, like every typical child that hasn’t mastered the art of spitting, she would vomit out her phlegm, and this act unfortunately would include her last dinner as well (since her vomits occur normally at night when sleeping).

For the past week, her mom has been travelling more than usual, so she was with me, and her cough got worst for I don’t know what reason.

When she coughs, she wakes up and most of the time she’d want to throw up, so I’ve not been getting a lot of good sleep for the past week, hence my ‘groggy-ness’ of late. – It’s lack of sleep, and worry of Sasa’s condition.

Since children below the age of four are not able to take some very effective cough medicine, and the medicine given by the doctor (Rhinathiol) is also pretty much doing nothing to ease the cough, I’ve resorted to Dr Google for some advice on most occasions.

According to most articles I read, there’s no need to worry if a child below five years is coughing, if he/she is still active, eating well, and going around as usual. That’s a bit of a relief as Sasa is still her old self, except for her coughing. With whatever ‘dangerous thoughts’ eased, I then turn my search on Dr Google to methods on how I can stop Sasa from coughing, especially during bed time, indirectly, keeping her dinner in her tummy.

There’s like so many suggestions, but none exactly worked, which is expected since the source. We’ve tried using a humidifier, turning up the air-cond heat, using just old school ceiling fans and turning off the aircond, and even elevating her head when she sleeps. – It all didn’t work.

Giving her honey before she sleeps? It did seem to work at first, but it doesn’t anymore, working best on me instead (since I am also coughing now).

So, when I roamed the parenthood chat rooms on the internet for a solution, I tried yet another solution which I see as harmless, which is : putting VapoRub (Vicks) on her feet while she sleeps.

To my amazement, after applying the VapoRub, she stopped coughing!

Okay, this blog post is after my first try of applying the vapoRub just now, but I’ve not heard my girl cough for an hour, which is really something.

I’ll update you if it continues to work, but for now, I hope this is the ‘secret’ way to stop cough for infants, especially at night. – Might try it on myself too.. manalah tahuuuu…

p/s It worked for a while, but then, it didn’t again. BooooOoo…