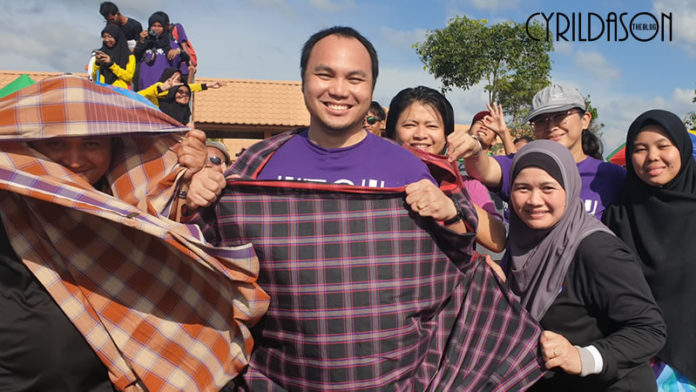 UNGU 2019 was just crowned as champions of the Sekolah Menengah Kebangsaan Matang Jaya Sports day that just ended a couple of days ago.

I say ‘unexpectedly’ because never in my wildest dreams did I think Rumah Ungu could do it. Not under my watch especially. This was despite the fact that Rumah Ungu was the defending champions of my schools sports day for two years in a row.

In the first staff meeting, I was announced as the ‘big boss’ for Rumah Ungu. I knew it was just a matter of time since things like these were rotated among staff so I said nothing.

Thankfully, the Sports Day this year was planned so early in the year, so that was a really good thing. It meant I could do my job early, and complete it early.

The game plan was simple – to empower the students to do more, hence indirectly teaching them a thing or two about management.

Former ‘big bosses’ of Rumah Ungu, Mdm Suzie had before that told me that I should do my best to retain the championship. Others said the goal was to ‘avoid someone (I shall not name) from winning’.

I was more focused on getting my job done rather than winning. It was after all a school sports day and in my books, winning comes last.

Having fun and enjoying the experience is more important to me. A win of course would be a bonus.

After the first committee meeting of the school’s sports day, it was agreed that all sports houses would have a superhero as a mascot.

I decided to go for Iron Man, knowing it would help with the march pass. The march pass is a competition by itself and getting a known superhero would mean costumes would come by easier. It is the second most important competition during sports day. The first is of course the overall championship.

Unfortunately, after the first meeting with my house members, there was a disagreement about the superhero I choose for Rumah Ungu 2019. Students wanted another superhero and it was agreed that Black Panther would be the new superhero.

I had no problem with the change as the suggestion to change came from the students. What’s important is they would enjoy using the superhero during sports day.

With three weeks to prepare, I was asked by the school to speak during assembly for a couple of minutes on stage about Rumah Ungu 2019. I took the opportunity to announce the change of the mascot, and somehow coined the slogan of ‘UNGU FOREVER’.

I guess the slogan was very well received because after that short speech, I had students greeting me with the slogan as I pass-by in school.

This gave me the idea to brand the house just as ‘UNGU’, complete with a logo which could be used for years, and the UNGU logo was born.

To be honest, my colleagues and students really did a lot to help make UNGU champs. I had students coming up to me asking what they could do to help, with colleagues offering to stay back to train the students.

As it was examination time, students found themselves torn between training for sports day preparations and studying for exams. I emphasized on the exams more, and even canceled the first week of training to allow students to study. UNGU was the only house that did that.

The final week before sports day was when everything started to fall into place. I took charge of registration of athletes while I distributed task to other UNGU colleagues accordingly. Training was held and preparations heated up.

Students were also given their set of task which included collecting donations and prepping for athletes.

We ended up collecting some RM400 from students alone and teachers gave RM220, giving us RM620 from donations. It was a huge sum to be honest. Usually collections from students were poor, but the students really collected quite a lot this time around.

The money collected was later used to buy food for the athletes as well as equipment needed for sports day. Some of my colleagues also took it upon themselves to ‘sponsor’ other needed things during sports day without me asking.

Sports day came, and this was the moment of truth.

I rallied the team, and emphasized again that the most important thing is to have fun.

Winning something would be a bonus and even if we came in last, I would still cheer and be happy about it.

I also told everyone to try their best in their sporting events, and avoid getting injured.

My amazing colleagues did their part without needing instructions and at the end of day one, it was a huge surprise to see how UNGU was second in the standings, going neck to neck with the leaders from Rumah Merah.

For the second day, I rallied the troops in the morning and told them it is possible to win the Sports Day.

I could see the spirit in my students and fellow colleagues as UNGU started raking in the points.

To be frank, UNGU athletes not only lacked training, but they aren’t also school athletes. This by itself is a huge disadvantage as opposed to Rumah Merah which trained harder and is made out of more school athletes.

Despite the odds, UNGU 2019 somehow overtook Rumah Merah as the results started trickling in. At the end of day two, UNGU was on top with over 30 points! I couldn’t believe my eyes!

A 40 point difference is clear enough to declare UNGU as champions of the 2019 Sports Day!

What made me proud most is the fact that UNGU gained plenty of points from non-gold medals which showed indirectly how spirited our athletes were. It was unbelievable!

You can check the full results here.

Being crowned Overall Sports Day champions was one thing, but winning the march pass is another thing.

The march pass and closing of the School Sports Day was done on Friday as the final event.

Two of my colleagues, Mdm Maslinda and Mdm Siriya were in-charge of the march pass, and with the help of other colleagues as well as students, produced a very fine performance. On my side, I rallied the teachers and romped almost all teachers of UNGU to join in the march pass and it was really sporting of them to oblige.

UNGU had one of the biggest contingent due to the participation of my colleagues, but above all, it showed how united the UNGU teachers were in supporting the students effort.

When the results of the march pass was announced, it was unbelievable. UNGU thrived again! Yes, we won!

We just did the double!

IT WAS A SWEET VICTORY

For me personally, it was quite a victory because not only did the sports house I manage retained its status as overall champions, it also won the march pass.

However, above all, the cooperation from my colleagues (the teachers) and students were really something to shout about.

That said, it was a memorable Sports Day and I hope everyone had as much fun as I did.

I am really proud of my team.

Special thank you to THEKEDEY for being able to supply our UNGU tees and flag at the very last minute.

THE VLOG: Keeping the memories of UNGU 2019 alive

To remember the victory, as well as moments for this sports day, I decided to do this simple novice video of the events. Enjoy.