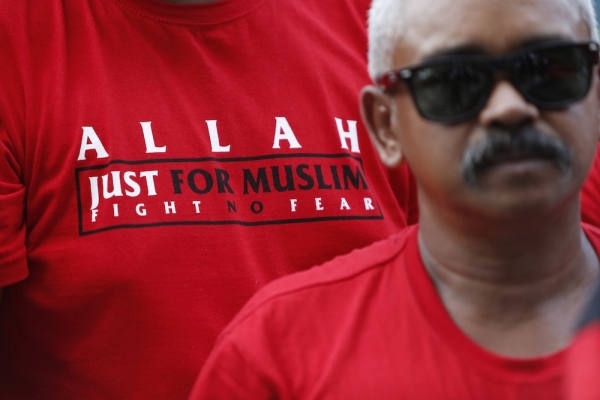 Religious post coming up so… IF YOU MUDAH TERSINGGUNG, TERASA, SAKIT HATI, or you are the type that READS A FEW LINES, AND THEN GOES TO THE ENDING without even BOTHERING TO READ THE CONTENT, skip this post and stay calm. This is not for you.

The ‘Allah’ issue verdict is out and it was not a shocker when ‘they’ won. Come on, three judges from people of the same faith which want the word ‘Allah’ to be exclusive speaks ‘reversed-verdict’ from day one.

Anyway, a lot of people, Christians alike, are questioning why is the word so important? Why are we so sensitive about using it, and why must we bring up such a petty issue to huge lime light.

Let me tell you MY VIEWS, and this is MY PERSONAL VIEW.

The issue actually goes beyond the naked eye. It is bigger than that. In Malaysia, despite our multi-ethnic, multi-religious society (which of course we are VERY PROUD OF), discrimination is on the rise. As hard as it is to receive, it is true.

A few years ago, at a Christmas function attended by the Prime Minister, the crucifix was not allowed, and hymns mentioning Jesus were banned from the event, which I repeat, was a Christmas event. If you do not know, Christmas is all about celebrating the birth of Christ, and here in Malaysia, we have people asking us not to sing praise and hymns about Him, and asking us to cover down or remove the cross. Funny heh?

That was only one of the many incidents which I felt was really not appropriate, not mentioning wrong.

Which brings me to the current ‘Allah’ issue.

It’s not about the name, but the fact that many of us see that such a verdict is a sign that things will get worst in terms of the freedom of us, the minority non-Muslims.

Barely hours after the verdict was read out, we already hear people calling that the same rule be extended to the Malaysian Borneo sides.

Such call just justifies all the worries, with no one from the majority seemingly willing to stand up to stop such calls.  Not even the Prime Minister it seems. All I see is many minister turning a blind eye, allowing more of such actions to carry on.

That will surely lead to these people (and when I say ‘these people’, I mean these selected group of very emotional people, and NOT everyone in the religion) to be even more daring, hence trying to pressure more to be done to ensure what they want is achieved with the minority even more marginalized.

As a minority, it really is starting to look bad. Very bad.

And with people ‘over there’ trying to influence ‘people over here’, I am scared of the future because so far, it has been great ‘over here’.  This is mainly because the ‘people over here’ understand about respect and acceptance to the extend they could crack up racist jokes in front of any given friend, plenty of times in a day, with everyone knowing it is just a joke and not meant to harm anyone.

That said, the ‘Allah’ issue is more than it seems, and if ‘people over there’ manage to influence ‘people over here’… Sarawak will never be the same again =(