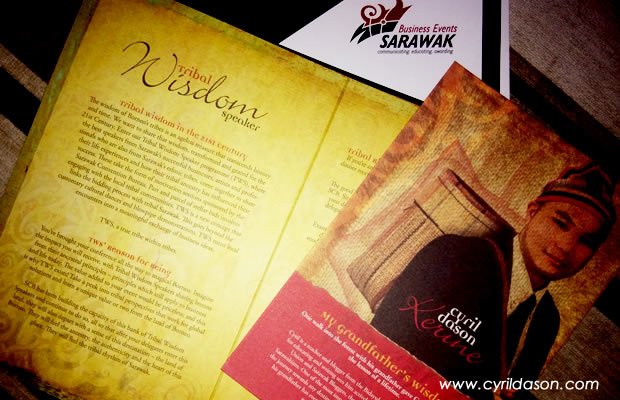 Yesterday, I was reminded that I was part of this initiative by the Sarawak Convention Bureau called the ‘Tribal Wisdom Speaker (TWS)‘. I recall how I had to persuade someone to let me get off work early to attend the training, and how I felt when my request was bluntly denied, despite the fact that there was nothing much going on at work (since the day was used for a celebration and there were no lessons).

Yesterday also, for the first time, I saw brochures of how I was promoted internationally under the TWS programme, and I have learned that I was in fact chosen to speak at some international conferences.  Unfortunately, a technical issue or should I say ‘a glitch’, saw the invitation email being ‘lost’.  But I’d prefer not to dwell on whose fault it was and because for me, it was just not my luck.

Nevermind that, looking back, it was indeed a huge privilege to be able to learn how speak in front of a professional crowd, and in a lot of ways, it has enhanced how I deliver talks and lessons in my daily work.  The training I received as I was told, didn’t come cheap, and so I must really thank the Sarawak Convention Bureau for engaging me to be part of this massive international programme some three years ago.

Regardless, I had a good chat with the Amelia and Mike from SCB yesterday, and it certainly opened my eyes on a lot of opportunities out there which involves the Sarawak Convention Bureau (SCB).

I don’t really have much more to say other than that, but in case you have not known, SCB has launched something called Business Events Sarawak (BESarawak), and I figure everyone could benefit from knowing more about what they do, especially when you are talking about exposure and opportunities as a Sarawakian.