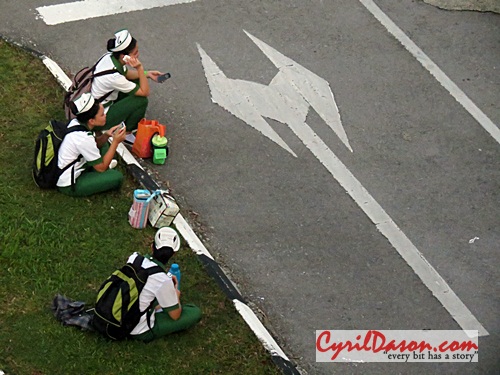 Girls complaint that chivalry is dead, but it’s really going beyond that nowadays.

Not only do you see man treating the ladies worst today, but the amount of respect shown towards one another is really diminishing.

In school, I see students yelling towards each other, with some prefects, which are suppose to handle gatherings or assemblies giving instructions as if they are teachers or ‘big bosses’. Words of courtesy such as ‘thank you’, ‘please’, “May I”, and “Excuse me” seem to be lost, what more to say to admit defeat and say ‘sorry’.

Even some teachers fail to realize their mistakes as they too do similar gestures. It really makes you wonder who the students are emulating.

But are teachers really to be blamed?


I don’t think so. I think parents should play a bigger role in educating their children about courtesy. Telling them how to make statements and give instructions with better manners.

I remember a few years ago when I asked a student to be an emcee for a certain event I organized. She was really doing fine, until she started asking the guest to move and fill the seats in front which were empty. At this point, she was basically telling everyone at the event instructions like “Students, fill up the front row seats. If you don’t, the other committee members will drag you to the front”.

Eventually, she failed to get anyone to do what she wanted, with frustration obviously showing on her face, and her fellow friends looking agitated of being forced to move.

Upon hearing and seeing this, I went to her, pulled her aside and told her that she needs to be more courteous by including words such as ‘please’. She listened, and started making more polite announcements which got the crowd moving.

I think this was mainly due to the fact that the other students felt less repressed when such words were used towards them, and that students nowadays do not want to be treated as ‘followers’. It’s not only students, but the younger generation which people fondly call as ‘Gen-Y’ seem to have such attitude too.


I don’t think I’m of the ‘Gen-Y’ group, but I’d admit that I too, do not want to be forced to do something; retaliating more often when I am given harsh delivered instructions, rather than options by someone of similar or higher authority.

That said, it’s really not about ‘who’s bigger’ for me, but rather about ‘respect’ as I believe that being courteous shows you respect someone enough to give them options, and to be polite.

My best bet is that these kids also want to have that option and be shown a little respect by everyone, including those older than them.

That said, I hope more please can start being courteous especially to me because for me, courteous goes a really long way.

There you go, i finally created a blog post!