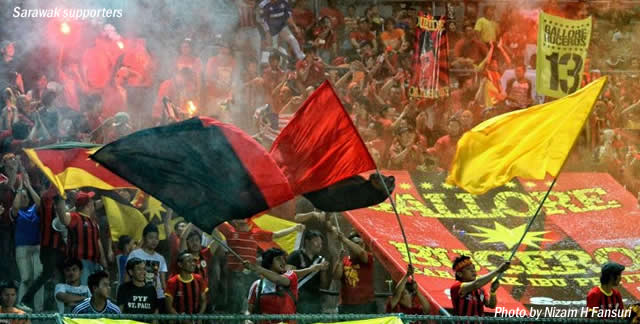 In an intense game last night, Sarawak was defeated by LIONS XII.  While the results should be the real highlight, the post-match incidents coloured websites, blogs and news articles with many trying to give their impression of what happened.

As a football fan, I was at the stadium guilty of cheering and jeering for the team I was passionate about, Sarawak.

As expected, a thrilling match was played in Kuching last Saturday with the game televised live from the Sarawak State Stadium. Fans were excited as the last live game televised from the State Stadium was in 1992, and the home team known as the Crocs indeed didn’t disappoint their fans as they dominated the game.

Tucked away opposite the main grandstand were about 50 supporters of LIONS XII. Clad in white and red, the supporters hung a medium sized Singapore flag at the stadium fence. There was no obvious barrier between them and the Sarawak supporters, but a few security forces were there just to keep things safe. The game was dominated by Sarawak, but the LIONS XII did have their moments.

Unfortunately, in a massive turn of events, LIONS XII whom was not dangerous except when it came to set pieces, was awarded a penalty, slotted it, and won the game. There was no replays for those at the stadium, and so everyone was dubious over how a penalty could be awarded. But they didn’t misbehave. A few item making its way to the pitch, far from the pitch is common in Malaysian football. You know it, I know it. In fact, most Sarawakian fans are unhappy if they found out someone had thrown an object in the pitch. When the game Sarawak-LIONS XII game was stopped due to laser pointers shown at Hyrulnizam Ismail, the fans booed the person responsible with many asking the police to catch the person.

However, decisions made by the man in the middle after the penalty kick never seemed to favour the home team, and this caused dissatisfaction, particularly when many saw what was an obvious handball turned down for the home team. When the whistle blew, bottles flew, targeting one man which is the person deemed to be biased in his decisions. He was making his way out of the field.

Reserve and substituted payers of the LIONS XII were seen to have taken shelter under their reserve bench while the Sarawak players crowded the referee. The crowd chanted ‘Referee rasuah’ as verbal abuses were directed to the referee. Also on going during this incident was the LIONS XII players whom were on the pitch moving towards their supporters at the other end to give their fans credit for their support. Except for probably the usual verbal abuse, no object was hurled to them as their fans cheered when their players came close.

The situation was different at the main grandstand where the referee had to be protected by the FRU due to objects being thrown to him. Some of the LIONS XII players choose to walk with the referee, hence seemingly making them look like targets when they weren’t. The situation in the stadium calmed down after the referee entered the tunnel, but some Sarawak fans choose to gate crash the grandstand in search for the referee. In the process, they vandalized the main gate, and a bus which is said to ferry the referee of the match.

The fans gathered at the grandstand area, chanting ‘Referee rasuah’, and continued to sing patriotic songs. One man came up, shouting ‘We will wait for the referee’. As a precaution, all players and officials were asked not to leave until the FRU came to disperse the crowd. When the FRU came, they chased the crowd away with little resistance and the eventful night ended.

Upon reaching home, social media was abuzz about the incident.  Based on photo proof, twitter post and what live feeds they obtained from TV, fans from the LIONS XII filled Facebook and Twitter with racist remarks, provoking some Sarawakians to respond emotionally.  I don’t need to mention what was written because a visit to any site would reveal what was written.  The official LIONS XII page on Facebook even requested their fans to stop making racist remarks, which is an action I applaud.  They have since also removed the warning and all contents which are deemed racist, but other news portals like Yahoo Sports has kept a few of comments alive, with some noticeably deleted.  You can see below.

To say that Sarawakians are sore losers would be indeed misguided as the fans didn’t react in such manner when they were defeated to Terengganu 1-0 in their second home game this season, including their defeat to Kelantan last season which saw a crowd of 35,000 fill the stadium.

Updates on the incident fast became news on social media with photos and captions putting Sarawak as hooligans. Many choose to believe these publications and give their two cents on the whole incident despite not being in the stadium physically.

With that said, the incident at the Sarawak State Stadium last Saturday is indeed not a proudest moment for Sarawak football because we could really do away with such incident. However, the racist remarks seen online, coming from fans in a country deemed by many as ‘first class’ is even worst, if not equal.

The final score of the game will stay, but the damage caused by the Sarawakian fans will cost FAS, as such will the on line abuses will live on to shame the team they support.

On the referee being biased:
Biased refereeing in favour of teams opposing Sarawak is not uncommon in Malaysian football with Sarawak experiencing it countless times with the worst happening in 1989 resulting in Sarawak FA pulling out of the Malaysian FA(FAM). The tragedy was resolved when FAM sent their deputy president to settle the issue, but poor refereeing decisions continued to plague the Malaysian league with history making Sarawakians even more emotional when it happened to their beloved team.

Hostilities seem to be imminent as Malaysian press (outside of Sarawak) continue to show favouritism over Peninsular based teams in their reviews and reports, while downplaying Sarawak’s ability in football. A win for Sarawak would be greeted with little coverage by these press, or with some claiming that Sarawak was ‘lucky’, while still claiming the defeated team was controlling the game despite live coverage showing otherwise. Commentators on live telecasted matches are also seen to be more inclined to comment on the ability of the Peninsular based teams, while bringing up issues which will downgrade Sarawak’s ability.

NOTE:  Goal.com requested for an exclusive which I obliged (I gave them a 5 hours advantage before releasing this one), and it was featured as it is on the both their Malaysian and Singapore site with little editing.  However, I have noticed that they closed comments for the Malaysian site, while allowing the Singapore site to release comments. *sigh*