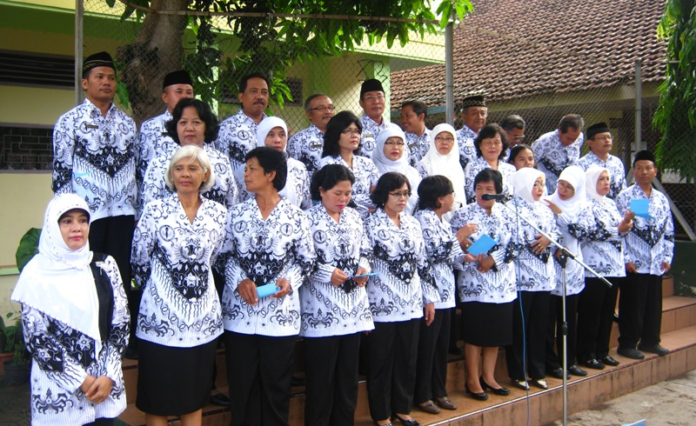 There is word going around that Guru kena guna pakaian seragam.

Now, I purposely used Bahasa Malaysia there so that I get some nice hits on such searches.

According to rumors, Tun Mahathir himself was the one who coined the idea, to have “Guru kena guna pakaian seragam”. I can’t however find the link that suggest he said so, hence making this a mere rumor for now.

There is however an on-going debate on debate.org about the issue.

If you are not Malaysian, and you don’t speak Malay, Guru kena guna pakaian seragam translates to Teachers are required to wear a uniform.

At first, I was against the idea.

However, after some careful consideration, I may be for the idea.

I do see some good in having a uniform, like it does save wardrobe cost at some point.

It also allows you to identify strangers in schools, indirectly decreasing theft in the staff room, which is quite rampant these days.

Aside from that, I do foresee such thing to be a culture of sorts, and it will be accepted by the masses after some time, despite the complaints.

When it comes to style, I do prefer batik to be used as the uniform for teachers as it is more comfortable to wear. I’ve never liked wearing neck ties to work.

Another option is to wear a corporate tee, but such material is best reserved for workshop duties instead of the class as it would be rather hot.

THOSE AGAINST THE UNIFORM

I’m also aware some of my colleagues are against the introduction of teachers using uniform to schools.

Some have vented on social media, and some have argued their points personally.

I do not want to comment on their views but I personally think the most absurd reasons to stop the implementation of teachers using uniform is seen in the comment highlighted below.

Academic qualification has nothing to do with uniform.

I am utterly disappointed if that is a fellow teacher because those words should never be uttered. You can be a PhD holder, and still wear a uniform with dignity.

MY MAIN QUESTION ABOUT TEACHER’S UNIFORM IN MALAYSIA

But the introduction of uniform for teachers in Malaysia brings one question to me – which is, who would bear the cost?

It is noted that other jobs with uniforms like nurses, doctors, the police etc, do have uniform allowances, so I do hope that the same would be done for teachers if such dress code is introduced.

Also, there is a question about teachers who teach technical and vocational education. They need special clothing and also a uniform. Perhaps more allocation for them?

Regardless, this is just a rumor, but if it does come true, it’s not all bad.

If it doesn’t come true, well, it’s also not too bad either.