Home Personal Life Opinion If I had it my way, it would be ‘Sarawakians for Sarawak’
Facebook
Twitter
Pinterest
WhatsApp
Linkedin
Email
Print
Tumblr
Telegram
LINE

Today marked Sarawak’s independence rule from the British. According to Wikipedia, on the 22nd of July 1963, “Alexander Waddell, the last Governor of the Colony, left the Astana and boarded a white sampan to cross the Sarawak River, then handed the administration of Sarawak to the Sarawakian citizens, with the Colonial flag lowered and the Sarawak flag raised“. It was indeed a historic day, but such information never got into the Malaysian historical textbooks, for I don’t know what reason.

Anyway, with social media playing its part nowadays, awareness of what happened on 22nd July is growing with calls of ‘Sarawak for Sarawakian’ growing ever louder by the day. Drive around town, and you will see bold stickers stating “Sarawak for Sarawakians” with the first Sarawak flag after independence as a background. It’s so prominent nowadays, you even have cars decorated with those words.

But let’s pause for a while and think about the meaning of ‘Sarawak for Sarawakians’ and the ‘independence day walk’ held around Sarawak.

But the raw eye can be mistaken, like how our IGP seems to have believed that Sarawak is anything like the Peninsular of Malaysia, a.k.a Malaya. Over here, people are less political inclined and are largely united by ‘Sarawak’. The IGP perhaps has been too busy handling political rallies in the peninsular that he forgot there is a place in Malaysia where rallies can be apolitical. 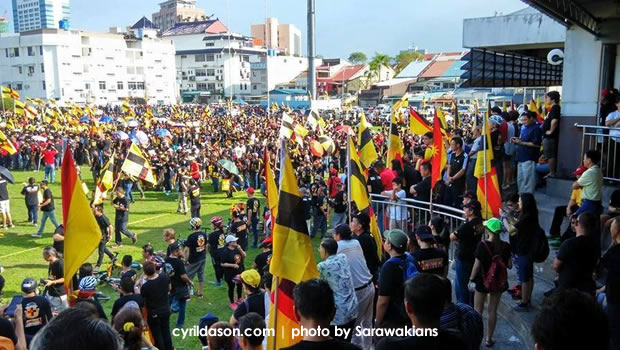 Perhaps some will argue that I am wrong (naive perhaps) and the independent walk is politically motivated, but from what I was told, as well as from photos I saw, everyone were just happy to be able to show their love for Sarawak and there was no politically charged speeches being made.  I had friends joining the walk, and they had a field day showing their support.

You see, ‘Sarawak for Sarawakians’ is not about breaking the bond we have with Sabah and Malaya, but rather a call to unite us Sarawakians to ask, or rather demand for better things as equal partners in a federation we helped build. Granted, I’d prefer the slogan to be changed to ‘Sarawakians for Sarawak’ instead as it reflects better on the demands, but it was not me who started the slogan and made it huge, so yeah…

The fact is, Sarawakians have waited for so long to be recognized, but it has not happened for the past 50 years, with some privileges slowly getting eroded as years go by. The decline has prompted many, the elders especially to worry that Sarawak will be just an ordinary state in Malaysia, where as it should be equal partners, as promised in the Malaysian Agreement. 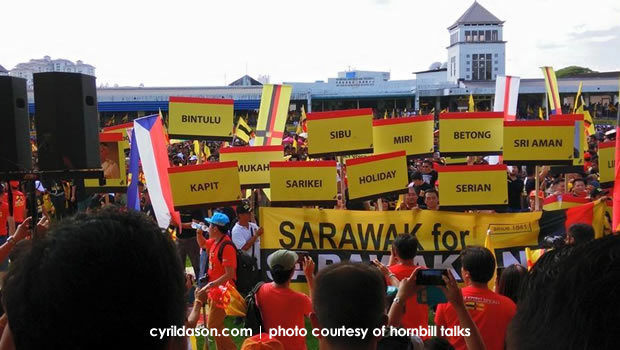 That said, after more than 50-years keeping silent and being short changed, Sarawakians have decided to stand up calmly to demand the 18-points as agreed when they formed Malaysia. After over 50-years, Sarawakians want school history books to reflect clearly what happened on 22 July 1963, and after 50-years, Sarawakians want their real independence day to be recognized by those in Putrajaya. To me, the demands are justified as Sarawakians have waited for over 50 years for such things to happen, but nothing has materialized so far, and if a ten minute wait is disappointing, imagine a 50 year wait. 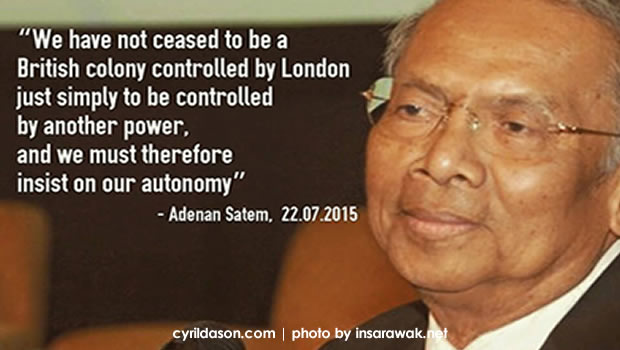 As for the ‘Sarawak for Sarawakian movement’, I do not support them nor do I have any idea of what they are about. For me, the independence day walk today and the slogan was just to demand for the three things I mentioned above which are long overdue.

If the movement of ‘Sarawak for Sarawakians’ is asking for more, then that’s on them. 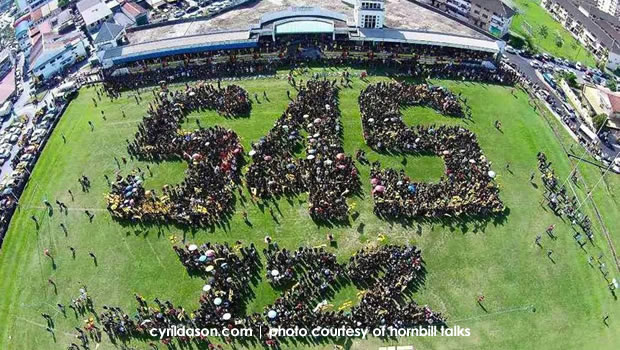 p/s: I don’t get why some individuals from Malaya are unhappy about us demanding such things and walking. Kitak orang bising pasal GST, 1MDB, Anwar, minyak, Bersih etc, sekda pun kamek orang anok.