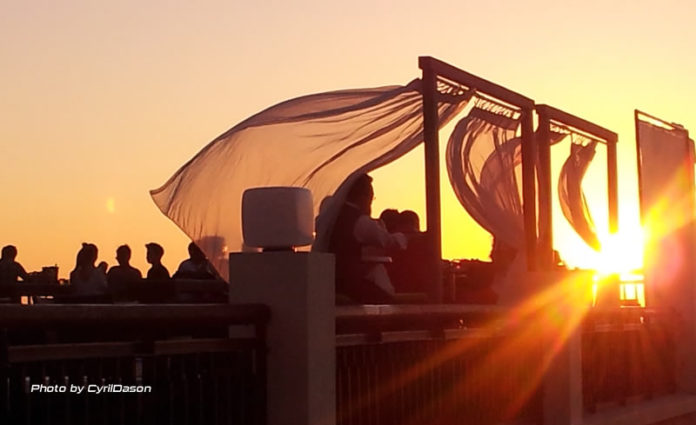 Day 5 of the Jewellery Hunt by Minex.  Now, without fail, I’d wake up early and check out the riddle, only to find out that I’d be heading to the nearest clue within an hour later… but coming back empty handed.

The previous day, the riddle went “Before you leave in search of treasure, let me first arrive at this place. There you’ll find me staring into space.“, and I was so convinced it was at the Kuching Planetarium.  Scouted for hours, with nothing to show off.  The only thing which I took home was the photo above.  A day after, was told that it was at Kuching International Airport.  Damn!!

Yesterday, the riddle went “Under the roof of the independent warrior, I’ll be lurking in the shadows.“, and I flocked Tugu Pahlawan with other jewellery seekers… but after 3 hours of intensive search… Amiey and I called it quits for the day.  There goes petrol and time down the drain.. and decided to also call it quits for the whole hunt….  Like Fahriee and Irene, and Jimmy and so many others….

But weirdly, tomorrow, I’m sure I’d wake up, and see the riddle, and think I  have a chance.  Like Justin said, I’m having Diamond-somia… hahhahaha…

I also attended Arthur‘s wedding today (20.1202008).  On my way, some idiot driving a grey Iswara with the plate number QTC2612 tried to run me off the road after I honked him for rudely squeezing into my lane from the left side of the road at a junction.  I know I was right, and he was wrong as I was at the junction with the arrow pointing right, while he was at the junction which pointed to the left, but when I turned right, he turned right, and tried to squeeze his way into the one lane road I was heading.. (again, despite him using the left side of the road/juntion which should be going to the left).  Honked him when I knew he was taking up my road, and he stopped a while, but gave me a chase soon as he moved, and tried to run me off the road by overtaking me, and coming so close I swear my car would knock his if I didn’t have the courtesy to slow down…  YOU IDIOT!! Never learn driving eyh??? WHEN PEOPLE HONK YOU, THERE MUST BE A REASON, AND WHEN YOU ARE AT THE LEFT JUNCTION, WITH THE ARROW POINTING LEFT, YOU SHOULD TURN LEFT, NOT RIGHT!!!  you get your license from coffee shop ka???  Hope you crash your car somewhere!!  KIASU!!

Argghh.. with anger in me, I drove 80km/h to Kpg Apar for the wedding.  It was a grand typical ‘kampung wedding’, and I was largely dissapointed that most of my schoolmates and old classmates decided not to not turn up.  Didn’t wear One Other‘s t-shirt because I couldn’t find where I stashed it (Got a messy house).  Anyway, was only asked ‘that question’ by my old buddies Punir and Kadak (which came also), and I asked them back. So, it’s evens Stevens.  No harm done, and I survived another wedding.

Anyway, the wedding actually got me thinking of when would my time come.  I think people asking me ‘that question‘ is irritating.. but asking yourself put’s ‘that question‘ into a whole new dimension.  Aghhh…

The wedding went on with the typical ‘Bidayuh style‘ toast (photo above), before the ‘trahui‘ (thanks Arthur for the correction) ceremony where the bride and groom would move from table to table, offering a glass of ‘hard-expensive’ liquor (photo below).

Then, came the most romantic time of the night.  The ‘slow dance’ by the newly weds.  I swear, it was so enchanting, I could admired Arthur for being that romantic.  The photo I took below made the moment even sweeter!!

Left before midnight, after a quick photo shot with the bride and groom and Punir.

To Arthur Ray and Gayle.. CONGRATULATIONS!!

Like people always say for newly weds..”Semoga bahagia ke anak cucu, dan cicit“… and to those wanting all the photos of the wedding without the watermark, please email me at cdason@gmail.com.