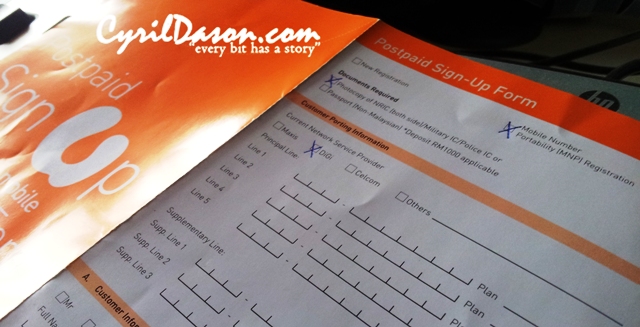 I’ve been using Digi telco for years, and they have been doing a lot of justice to me by providing the lowest rates the can at an acceptable service.

My contract with Digi was always extended after it expired, but I decided not to extend my stay with them about three months ago to open myself to options.

This was due to the fact other telcos were offering lower charges and better deals, which are almost similar to DiGi, and with Digi heavily just centered around the town area, I was ready to move to another telco, an action known as ‘porting’.

Well, last week, I decided to move to Umobile after weeks of looking at possible plans and options. I was not buying a new smartphone, so I was basically looking for a non-committal plan with good data volume, and low call out rates.

Umobile was offering 3GB worth of data, bundled with 400 free calls and SMS at only RM88. After the 3GB is all used up, you get slower internet connection with no additional cost. It was better than Digi’s new Smart plan which requires you to top up your data if you have used it all up. At that point, Umobile’s option really sounded like a good bargain to me, and so I went to SenQ (which is one of their agents here in Sarawak – since they don’t have a service centre), and signed up.

A dear friend whom has been on Umobile said the coverage is ‘okay’, but he was on prepaid line, so it doesn’t really justifies Umobile considering he has very limited data.

Anyway, less than an hour after the porting process was successful, I was left disappointed.

The data line by Umobile was at GPRS (lowest data speed) at CityOne Mall Kuching which was in the middle of the city, and although it did improve to EDGE (Second lowest data speed) outside the mall and in many places around town, it was far below the likes of major telcos like Digi, Maxis and Celcom.

In fact, the data coverage kept changing and searching for better options, and switching between GPRS, EDGE and 3G/HSPDA+, that the connection was unreliable with data being completely disconnected at some point.

Such experience was indeed surreal with myself being very disappointed with what I had just experienced with Umobile.

And to note that Digi would be soon rolling out its LTE network nationwide just adds salt to me.

But I would be giving Umobile a one month try, and probably I’d ‘port’ to another telco yet again. This time, chances are that the ‘porting’ will come with a new device to replace my ageing Samsung S2, unless of course Umobile gives me a very good reason to stay.