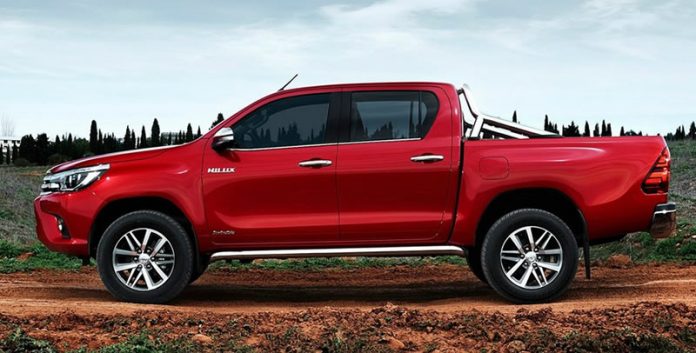 There’s a shift in what I write. Seems I am writing more about cars, or pick-up trucks of late. Well, I have decided to share my experience when I test-drove these vehicles, and I do hope my experience would help you, although I must admit that part of me is now reconsidering the whole ‘get a new car/pick-up truck’ idea.

Anyway, this is probably one of the few, non-professional reviews of the Toyota Hilux 2016, so spare me the nasty comments when it comes to technicalities. Here, I’d just talk about four things, the interior, the exterior, the driving comfort and finally the price – all done in layman’s terms because I do not know much about cars *LOL*

The interior of the new Hilux 2016 is neat and clean. It looks posh and solid, and the finish looks good, despite the fact its is largely made out of plastic. The drivers seat was comfortable and the whole cabin felt spacious. The 4.2” full-colour Multi-Information Display (MID) with illuminated Optitron Meter was a easy to read and understand, and 7” entertainment display did it’s job well despite my slight feeling it look rather ‘smaller and older’ than it is. For the lower spec Hilux 2016, there’s places with noticeable voids, and this is especially obvious on the steering wheel which loses one of its control panel switches. These voids dent the image of the Hilux 2016 simply because people would know something is missing in the pick-up.

From the outside, the New Hilux 2016 looks angry and strong. It’s higher than other pick-ups in the market by a few centimeters. Love the 17″ (or 18″) alloy rim, and the optional sports bar, but I have slight reservations about the reverse camera which sticks out like a sore thumb at the rear of the Hilux 2016.

It was a pleasant surprise to find out that the noise isolation of the Hilux 2016 was very good. It was so good that you hardly realize that the engine is running. Not sure how loud the engine roars when one is outside of the pick-up, but when I was inside, the engine noise was minimal, and a decent conversation with the radio on,  could be done nicely. Another good point of the Hilux 2016 was the driving experience, which was seamless. On a normal city road, there was no instance at what so ever did the Hilux 2016 feel sluggish or under powered, and the whole journey, including a steep ascend over Bukit Siol Kandis (DBKU HQ) went incredibly smooth with the RPM clocking below 2000. In terms of power, the Hilux 2016 was just incredible. The only discomfort about driving the Hilux 2016 was that it was rather bumpy, thanks to the leaf spring suspension it has.

When it comes to pricing, the all new Toyota Hilux 2016 is mak datuk mahal, but if compared to other brands in the market, it does seem reasonable especially since it does give you like everything, with quite a number of safety features. The price is lower than the Ford Ranger, but the sweet additions like the traffic camera, the water cooler compartment, the ‘follow me home’ function, and the improved ability on very bad roads,  makes that extra price seem worth it.

You feel superior on the road when driving the Toyota Hilux 2016. It’s like you basically own the road. Noise isolation is impressive, and it does feel comfortable if you are driving. I love the dashboard indicator about fuel consumption, and the ‘follow me home’  feature is a huge plus. In terms of safety, the double locking system makes you feel safe leaving the car unattended, and additional parts are well priced.

Ride is generally bumpy because it still utilizes the leaf spring suspension, and the entertainment system feels old (perhaps rather too wordy and monocoloured) if compared to the Navara. I really dislike the rear camera at the back which appears like a sore thumb (look above), and the noticeable voids in the interiors (for the cheaper/lower variants) are a huge turn off – you can see the void for the push start below. The Hilux 2016 is also slightly more expensive and the discounts given aren’t that great due to the Hilux coming as the number one pick-up truck in Malaysia. Aside from that, the fuel consumption of the Hilux 2016 is still very much questionable although several sites have said it is 10.9L/100KM.

A good question which I can’t answer anytime soon as it involves affordability and pricing. As I said, the voids in the interior are massively annoying to me, largely because I will be reminded I am not  driving the best variant available.  This only means that I am left with the higher spec Hilux 2016 which cost a tonne more. The lower automatic 4×2 variant is still a whopping RM123,441 with insurance and road tax, meaning RM1,500/month on a 3% loan for 9 years.  That’s like wah lau eyhh a lot of monnehhh! so we ‘naggalah dulok’ hahahhaa…