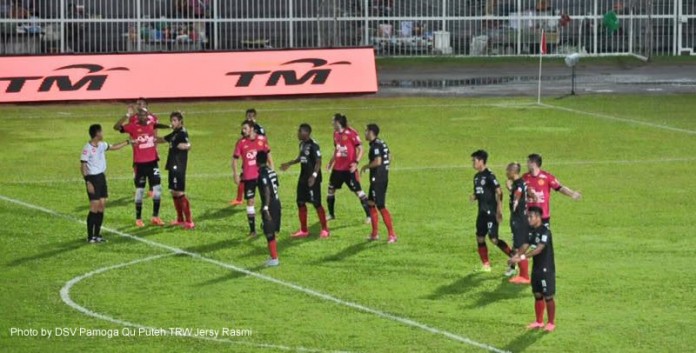 Sarawak football is indeed a sad sad tale to tell. No one knows what went wrong until we leaped downwards and no one knows wheather we will survive when we are back to top flight next season. You could blame the lack of support from our local fans, but with such bad quality presented during games, how can you blame them for choosing Man United, Chelsea or Arsenal over Sarawak FA?

Regardless, I am still a proud fan of Sarawak. Yes, I may curse them once a while, shout out loud of dissatisfaction over their game, and maybe shake my head of disbelief over miss chances, but the spirit of the team nicknamed ‘the Crocs’ remains strong in me. I can say that I am a loyal supporter of the team just based on how long I have supported them.

This year, I watched them play 3 times (So much for claiming I’m a die-hard fan). Definately they were not as impressive as the other teams. In fact, the only won once, and scored once at home, and played like ‘kampung boys’ in most of the games. It was one of those moments you just had to shake your head of dissapointment.

Anyway, the one thing which I really liked this year was the home kit. Boasting red and black stripes, the kit looks beautiful in my eyes, striking a resemblence with the AC Milan kit.

After contemplating for a bit, I finally decided to get the kit. The price for such a kit was RM129.90 (Rather pricey compared to previous years, especially for an unknown brand: StarSports). However, after much contemplating (again!), I decided to just go for it, and hence making the Sarawak football kit/jersey my most expensive jersey to date.

While many may say RM129.90 is a little too much to spend on a jersey, particularly one coming from an unknown brand, the jersey itself is very comfortable. I tried it out last SUnday, and I was very pleased with the comfort of the material, hence me telling Mike how I’ll wear this RM129.90 jersey everytime I come down to play. If you think my RM129.90 for the jersey is a waste of money, I seriously beg to differ, as I would also be wearing it to all the Sarawak games next season. Go ya Crocs!