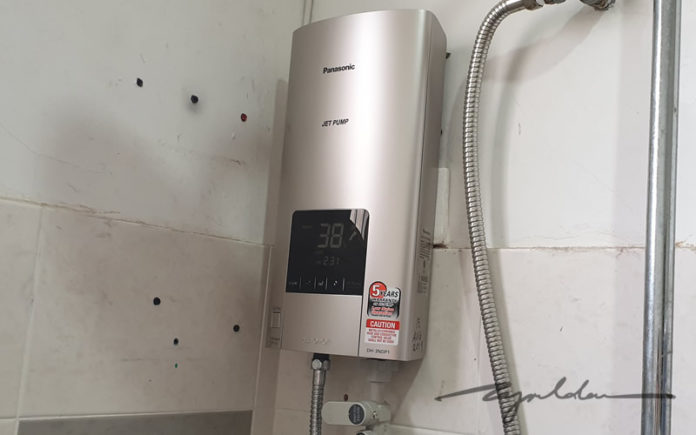 I bought the Panasonic DH-3NDP1 Electric Home Shower after my 3 year old Pensonic Aqua Water Heater started acting weirdly. Somehow, the pump wasn’t able to pump water and as I remember, the pump only had a one year warranty.

Anyway, I decided to buy the Panasonic DH-3NDP1 Electric Home Shower due to it’s price.  The shower came with a DC Pump and it also doubles as a heater.

It was on a bargain at a local SenQ, priced just at RM574, down about RM200 from its original price.

It took me an hour to install the shower, and once it was completed, I was impressed with it.  I personally love how it looks although I would have preferred it in silver than gold.

I’ve bought numerous shower (or water heaters) with pumps in the past, and the DH-3NDP1 Electric Home Shower is by far the quietest one I’ve had.

It is so quiet that it’s hard to tell if the shower is switched on or not.  The pump produces a very light hiss, but it doesn’t scream like previous brands I used.

Aside from that, there’s also a digital display which shows the shower operations.  This display also has a watch which is good knowingly my wife doesn’t use her watch in the shower.

I liked the On-Off switch because it’s huge and flat, making it practical when wanting to switch the shower on and off.

The AG Crystal Antibacterial Shower HeadShe loves it because there’s a 3-way shower selector button which allows easy change of the shower head mode, and I can’t blame her. Changing the way to shower is literally at the tip of my thumb!

Of course, like most showers these days, the Panasonic shower also comes with many safety features.

On a downside, I didn’t really favour the digital dial to control the temperature. 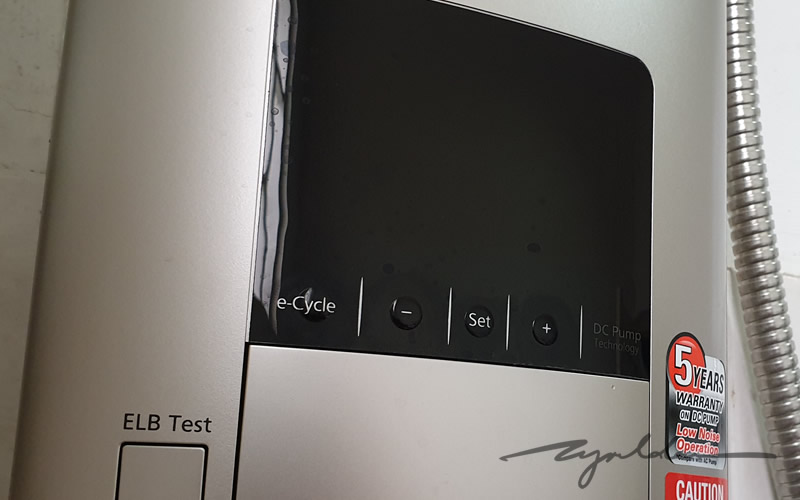 The digital dials of the shower/heaterI also feel indifferent with the e-Cycle hot and cool shower which I found rather useless considering I usually take very quick baths.

Other than that, I am very happy with my purchase and this heater in general.

WHERE TO BUY THE PANASONIC WATER HEATER

Like I mentioned above, I got my DH-3NDP1 Electric Home Shower from SenQ.  However, at RM771 on a normal day, it is quite expensive.

I scouted options, and realized that you can get the shower for less online.

GET THE LATEST PRICE OF THE SHOWER IN SHOPEE

On Lazada Malaysia, it is slightly more expensive, coming at RM570, also without delivery.

GET THE LATEST PRICE OF THE SHOWER ON LAZADA

Either way, buying the Panasonic DH-3NDP1 Electric Home Shower online is cheaper, especially since offers in SenQ (where I bought mine) aren’t exactly daily.