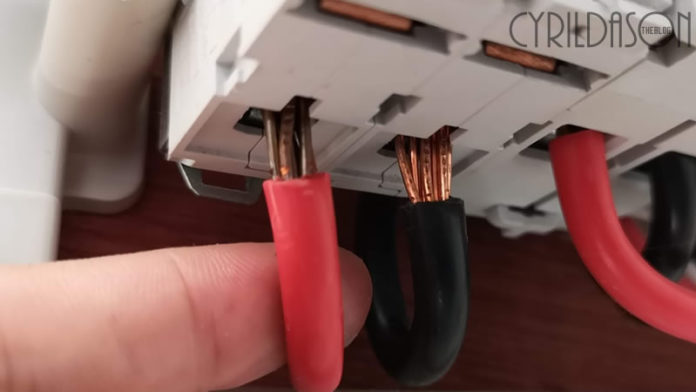 For the past month, there has been random electrical blackout in my house.

These blackouts effect only my house which was odd.

It really baffled me, and so one day, after another random electrical blackout I decided to seek answers.

THE REASON THERE IS RANDOM ELECTRICAL BLACKOUT

I noticed that the Circuit breaker (ELCB) wasn’t triggered during each random electrical blackout.

This baffled me even further because usually the ELCB tripping was the root of most blackouts.  It wasn’t the case here. The main switch was the one getting a reaction and that was rare.

My electrical knowledge also tells me that the ELCB is the first defense when it comes to problems with the housing wiring system, so it can’t be wiring issues. I did after all spend a good RM4K to rewire the whole house after finding out the house original wiring was done poorly.

That’s when I posted a photo below on my Facebook to find answers. Within seconds, I obtained a few replies from those with experience. 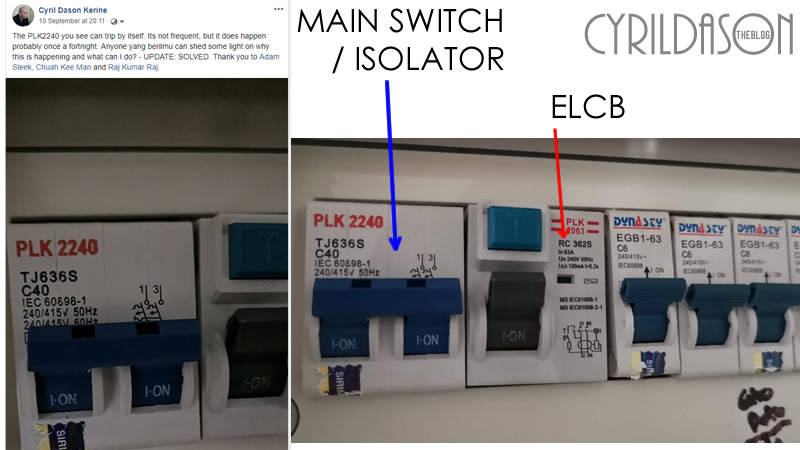 Apparently, the random electrical blackout in my house was due to the main switch, or called isolator.  The main switch would trip when it is overloaded, bypassing the ELCB.

It also explains why the trip tends to happen while my daughter and wife was bathing, and the airconds all switched on.

READ ABOUT CHOOSING AND INSTALLING A WATER HEATER

FIXING THE PROBLEM OF A RANDOM ELECTRICAL BLACKOUT

Fixing a random electrical blackout may seem complicated or dangerous, but it is not.

William, an electrical engineer had this to say about this post. I thought I should add it up as a fair warning:

Turning off the main supply isolator does not means that you isolate your distribution board properly. You shall test the circuit for death using a multi meter.
The isolator at circuit breaker is to protect the cable. You have upgraded your circuit breaker to 63 A but have you check the rating of your cable? If your cable rating is less than 63 A, you isolator will not trip if current passing through the cable already exceed the rating of the cable. For a short duration, it is fine but for prolong duration, the cable will be heated up, melt the insulation and causing electrical fire.
Without electrical license, you shall not touch the circuit. It is for your safety. Your life is worth more than RM 200 that you pay to the sparkle.

His full comments is below.

I do have some electrical background, so I know fixing something like this isn’t that hard. In fact, it’s pretty simple. Calling an electrician might be costly so I decided to do the change myself.

That said, after learning about the root of the problem, I went to a local hardware store and showed them the main switch I intended to upgrade.

As you see below, the old main switch (brand PLK) was number C40. I was told that I needed to upgrade it to a larger number to accommodate the electrical needs of my house which has two water heaters and a few airconds.

If I am not mistaken, the number represents the Ampere of the switch. A larger number allows the switch to handle more current.  In this case, an upgrade would mean I needed one with the number 63.

Once I already bought the new main switch, I headed home and switched off the main current inlet to the house.  This is usually located under the power meter and looks exactly like the main switch/isolator. – Remember, you must turn off the main power supply before doing any electrical works or wiring.

After the main power switch at the meter is turned off, I started opening the main board, and to reveal its contents. The intention here is to replace the main switch with the new one I bought.

I removed the live (RED) and neutral (BLACK) wires from the main switch I wanted to replace, and fitted in the new HAGER main switch.

After it was fitted in, I reinstated the live and neutral wires, screwed the wires tightly and closed up the mainboard box.

I was done and Yes, it was just that simple.

The next step was to flip up the switch at both the power meter (outside of the house), and the main board I just replaced.

The replacement took less than 30 minutes, and my random electrical blackouts were a thing of the past.

WHERE TO BUY THE MAIN SWITCH?

Like I said above, the main switch could be bought at any hardware or electrical store. Prices of these switches vary according to quality but hardware shops tend to balloon prices.

The brand PLK (40A) which I replaced was priced around RM12 to RM18.  HAGER (40) was priced at RM57. I was told HAGER had better quality and was more durable, hence the price.

Since I wanted to upgraded my main switch, I couldn’t go for the same specifications. I had to buy one with 63A. 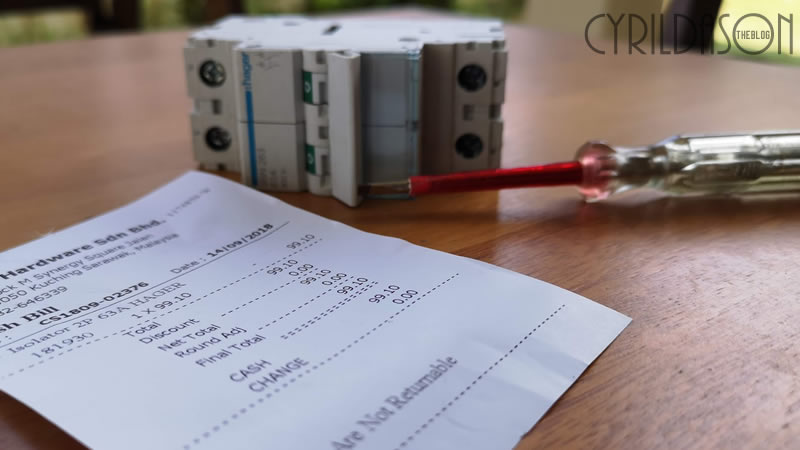 Upon returning home, I checked online and it was cheaper.

That said, if you aren’t in a hurry to replace your main board, do buy it online as it cost less than what I paid for.

BUY A HAGER MCB FOR RM80

Good luck in replacing your isolator!