Last month, my Sarawak Energy electricity bill ballooned to over RM470.  This month, it was at RM370.

This was a huge increase of  over 70% from the usual RM270-ish Sarawak Energy electricity bill I used to receive.

According to my conversation with Miss X (because I couldn’t get her name), Sarawak Energy estimates the electricity bill once in every two months.

This means that the bill reading may not be accurate as written on the electrical meter. Estimates are done remotely based on your general consumption.

According to Miss X, the A4 sized paper bill as seen below is an estimate.

The long bill is the actual reading.  Actual readings are obtained when a Sarawak Energy meter reader comes to read the consumption figures on electrical meter.

Estimation by Sarawak Energy can be lower or higher than the real usage.  If its lower, you can expect to pay less, but might end up paying more when the Sarawak Energy electricity bill with the correct reading arrives.

If the estimate is high for the previous month, one can expect to pay lower when the real reading comes by. Either way, numbers don’t lie, unless the meter itself is faulty.

That said, I decided to ask how the bill is actually calculated because there’s some valuation that’s taxed, and there’s some that wasn’t.

The Sarawak Energy website and app doesn’t help with understanding this, so I just had to ask.

From what Miss X told me, the rates of the total bill would be calculated based on the total monthly consumption.

In the case of my Sarawak Energy electricity bill below, it’s based on the 1,161 kWh units used.

Miss X explained that the first 600kWh units of use will not be charged the Sales and Service Tax (SST), but subsequent use would be charged tax. 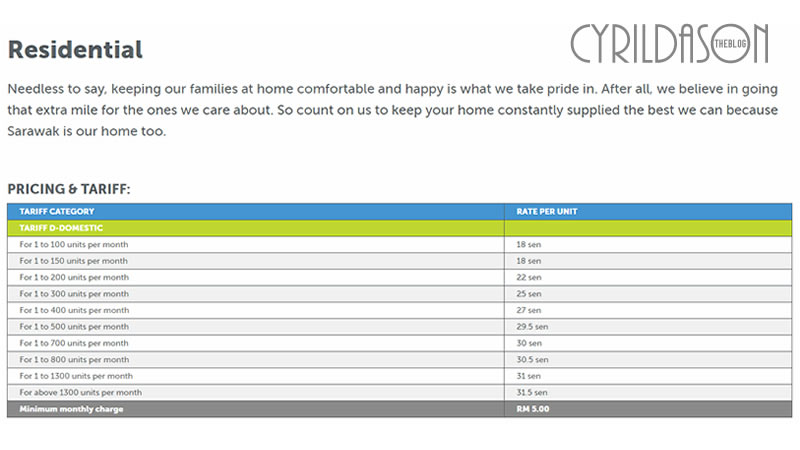 Based on the domestic rate table from the Sarawak Energy website, one unit is charged 31sen if total use is around 800 to 1,300kWh.

The table also shows that you pay less for less usage.

WHAT IF I OVERPAID?

I asked Miss X about if there was an overestimate hence resulting in me overpaying? She told me that Sarawak Energy will refund the money in the next bill.

I’m not sure how this would be done considering rates for the following month can be different (as its based on consumption).

Unwilling to prolong the inquiry, I just had to trust Sarawak Energy will refund the value accordingly.

Now, before you go on and say that Sarawak Energy electricity rates are high, it was noted in the news that Sarawak actually has the lowest electricity tariff in Malaysia.  Miss X confirmed that the rates had not been changed since 2015.

I checked out both TNB and Sabah Electricity rates and found that is was ‘sort of true’.

Comparing the three utility electrical rates showed that Sarawak Energy did charge the lowest rates for most usage, except for the first 100kWh.

If one used less than 100kWh, Sabah has the lowest electricity tariff at only 17.5sen.

HOPES FOR THE FUTURE

Of course I am hoping my bill would be lower, but I do need to find the culprit of why there’s a sudden surge in the usage.

While I’d like to put the blame entirely on Sarawak Energy, meter readings do not support this, and I don’t exactly have the skills or power to check if the meter is faulty.

I’m also unsure if the increase in electricity bill has something to do with the change of the insulator, but I am looking and googling about it.

Anyway, it would be good if Sarawak Energy did include details on how the electricity bill is calculated because there’s none on the website at the moment. (The Sarawak Energy app does allow you to do an estimated calculation, but it’s pretty basic. It doesn’t give a breakdown on how you are charged and what rates you are charged with)

It would also be good to have a guide on what should be done to conserve electricity on the app and website owned by Sarawak Energy.

Either way, I do hope that what I shared here would be helpful to all of you reading.

The best kindergarten in Kuching

Unboxing items from the 11.11 Sales by Lazada