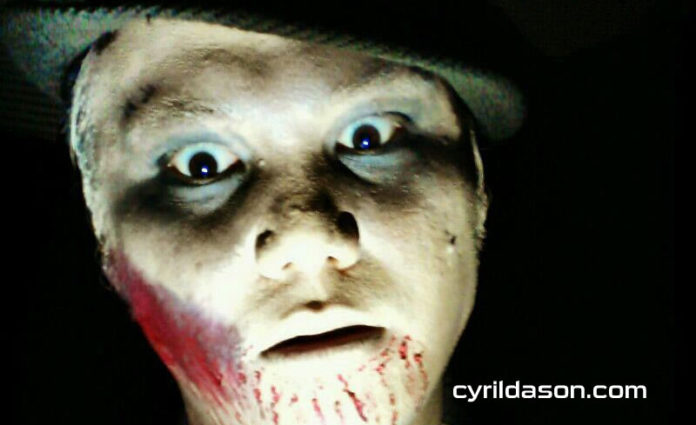 I have to admit that it skipped my mind about this post.  I could have not blogged about this event, but an experience at one of the first of it’s kind Halloween event in Kuching deserves some sort of retrospect, right?

Well, the event saw me dress up as a zombie.  It wasn’t my initial intention, but I thought “Hey, why not?”.

…and so, there I was trying to look scary with my zombie-fied looks, and when the concert kicked off, I have to say my costume was very apt.

The rock concert started with some very heavy metal stuff.  Before I proceed on to say more, I’d have to say that I am not a huge fan of heavy rock or heavy metal music. I can’t appreciate it much.

Anyway, the rock concert was indeed ‘rock-ish’.  You know those ‘head banging’, ‘hoarse sounding’ and long curly hair type of singers.  Well, they were at BCCK last 28 October to scream it out in their music.

I saw that there were fans of such music, but yet, I was not.  I did however enjoy the decoration and sound system provided by the Borneo Convention Centre Kuching (BCCK), which I thought was very creatively done.  Adding to that was the ‘camera-friendly’ lighting, which made images with my Samsung Galaxy S2 look so amazing!

Since this is a very very late post, I’d do away with the band names, but I guess it is suffice to say that the second and third band was similar or even more ‘hard rocking’ than the first.

Joachim, Cath and I did have fun scaring people with our Halloween costumes though.  Brilliant thinking from the planners of the concert say a dark maze created at the entrance, and this also served as a good place to scare the young and the unsuspecting =P

I mean check out Cath below, she’s like the ghost you see in those Chinese ‘pocong’ movies!

Fahri gave the whole concert a slight break from all the rock music as he made the crowd go wild with hip tunes and dub-step moves.

I personally do not recognize this type of music genre, but Fahri a.k.a DJ Vaux definitely made the crowd jump with joy to the music.

With the night growing late, a few of us decided to hit the food stalls outside, and finally called it a day when the clock strikes midnight.

That was of course after we caught up with some reluctant Chinese ghost relatives lurking around BCCK. The photo below shows how displeased they were with me taking their photo.

Overall, the whole event was a good effort by BCCK and I’d expect something even better and grander if this event returns next year.

To be honest, this is the first time I actually saw Kuching people dress up for Halloween. Previous years only saw patches of them dressing up, so way to go BCCK for creating such atmosphere!