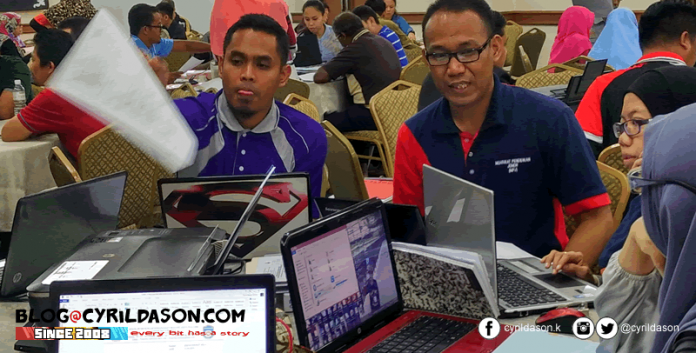 While some may only point out the negative or dramatic part of the Tomorrow’s Leaders Summit (TLS) last weekend, I’m now pointing you to the positive side of the whole event, which I believe was the highlight of the whole event brought to you by Glenreagh Sdn Bhd.

Before I start, let me stress that it takes a lot of effort, money and time to come up with a conference with such a huge scale, and when there is lacking in support from certain quarters, it makes it more difficult.  In my line of job, I organize things yearly, or at least… I am always part of some event happening in school.  Therefore, I know that it takes a lot to bring such a huge event together, and hence this post, and my personal views on why we should always reflect on the positives of anything organized.  Let the organizers look and ponder about what went wrong.  That’s not our job, and we aren’t paid either to do that.

THE GALA DINNER
The Gala Dinner was great for bloggers and those whom have never been to such a high stature event. I’ve been to a few last year, and I must admit… it is kind of cool being there, feeling important regardless of your stature. While you may not get to dine at the same table as the VVIPs, but at least you will get to feel being treated like one. The Gala Dinner organized was awesome with everyone suiting up (for the men) and dressing accordingly. I know, some may feel that the dinner wasn’t important, but new networks were built that day, and I can see that my fellow bloggers enjoyed the whole event. We were the last to leave BCCK!

I’m not sure what the others are saying but the food served was delicious. I loved the prawns, and the entertainment was of course a highlight! Oh, Norman did awesomely as an emcee, and Prez gave me a Bidayuh ‘Baruk’ she won for taking part in the dance. Good experience for both of them.

THE KEYNOTE ADDRESS
The keynote address by Professor Douglas D. Osheroff may have focused a lot on physics, nuclear reactors, helium etc., but his keynote was interesting to many delegates which were into science. Trust me, I saw many taking notes. Did he inspire? Oh yeah, I believe he did.  Senior lecturers and also academicians surely were keen to know more about what he was presenting, and youths which were from engineering background wee interested to know how he managed to balance his life as a professor and family man.

THE HIGH INCOME YOUTH DISCUSSION
Honestly, the panel discussion went better than I expected. Inputs from every panelist was worth to ponder upon, and the session showed that there is indeed a gap between the old and the new in regards to accepting change. In fact, there was a lot which could be learned both from the panelist and the audience. I’m not sure if what I said was worth to shout about, but I like it when some one came up and said “Don’t be too realistic, instead you must look at our situation“, which is also something I very much agree. Although there are claims that the session derived from the main topic ‘High Income Youth’, and that the discussion was ‘everywhere’, you must admit that the hall and seats were packed by the last quarter of the discussion, which I believe was a good reflection of how the whole thing went.

THE WORKSHOPS
Just like the Rainforest World Music Festival (RWMF), the workshops for this summit were awesome. It basically gave you a chance to be close to people of your interest, such as TV Personalities, fashion designers, government high ranked people, and so much more. The word I got from my fellow bloggers is that they enjoyed the workshops as it was conducted in a very casual yet informative manner. many were amazed by how casual the ‘stars’ of the workshops were, and many wished it could last longer. I for once thought that the workshop by TV journalist Grace Ng was an eye opener.

CONCLUSION
You see, regardless of what went wrong for the TLS, I fully believe that it did achieve it’s goal, which is to focus on youths of high income. The workshops and the dialogues were all geared towards opening youths to new opportunities awhile giving them awareness on how they can improve themselves. Yes, there maybe drawbacks, but what event doesn’t have one? Like I said earlier, let the organizers think about it. As for me, I gained a new perspective in life, I learned about what journalism is about, I educated myself in numerous interesting fields and more importantly, I enlarged my networking by meeting people of all sorts and statures.

To say the least, the TLS was a very good and insightful event, which I wish could be done again someday.