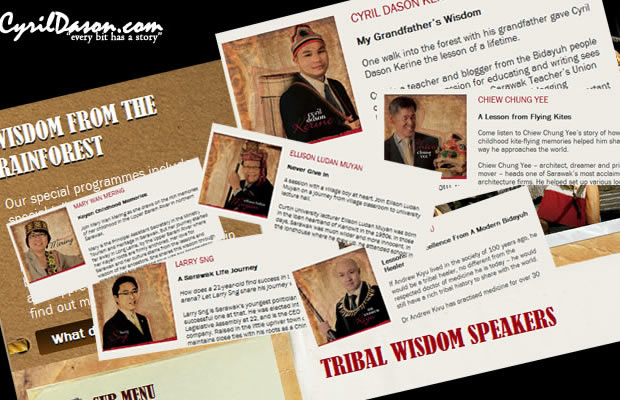 Before I go on, this entry is not in any way meant to gloat. If you feel I’m doing so, to the extend you feel like puking, then I’m very sorry as it’s really unintentional. I only wanted to share something I felt was special to me.

Last year, I was invited to train for a special programme under the Sarawak Convention Bereau (SCB). My trainer was Tina, and it took quite an effort to persuade my boss to get released from work to attend the sessions as it was held during my working hours. Well, the programme was initially delayed to this year, and now my face smack in modern-Bidayuh like costume is featured in the SCB website under the Tribal Wisdom Speaker (TWS) programme.

Some may say being in the TWS is not a big deal, but yet for me, it is. I’m 29 this year (28 when I was called to be part of the programme) and I keep myself low under the huge pile of paper work I receive daily. I personally feel that I have not contributed as much to Sarawak or Malaysia in general, which explains why I was rather clueless when I was asked to fill in a form by SCB which asked me about ‘my contribution’.  The fine people in SCB however felt otherwise as they called me up to be part of this huge programme.  I think maybe this is one of the cases where others see the good in what you are doing, yet for yourself, it’s just a day in your lifetime.

If you are not sure about what the TWS is all about, then here’s a quick ‘unclear’ definition of it, which I took from the SCB website:

The wisdom of Borneo’s tribes is an ageless treasure that transcends history and time. We want to share that wisdom, transformed and geared for the 21st Century. Enter our Tribal Wisdom Speaker programme (TWS), where the best speakers from Sarawak’s successful businesses, artists and professionals who are also from Sarawak’s ethnic tribes, come together to share their life experiences and how their tribal ancestry has influenced their success. These take the form of motivation sessions sponsored by the Sarawak Convention Bureau. Part and parcel of stellar bids involves engaging with the local tribal communities. TWS is a new concept that links the bidding process with tribal Sarawak. This goes beyond the customary cultural dances and blowpipe demonstrations. TWS turns local encounters into a meaningful exchange of business ideas.

TWS, a true tribe within tribes.

So, regardless of how meaningless this programme is to you, for me, it’s a big deal to me, more so when I am asked to share my side of being a local Sarawakian to visitors to Sarawak.

p/s: My tale is about the durian fruit, so do try and imagine how that sounds on stage hehe..