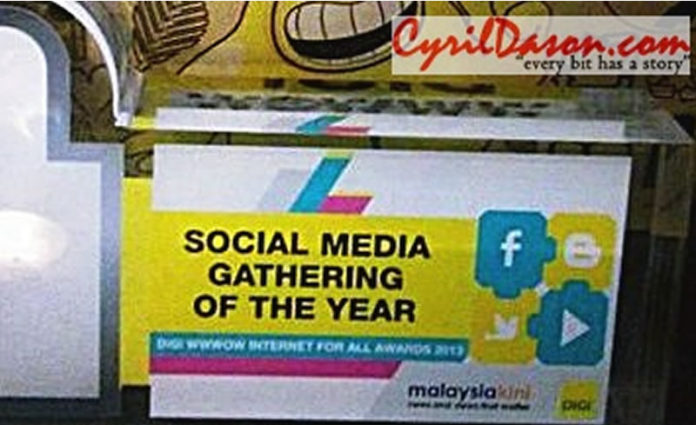 I’ve been getting a lot of these silly grins on my face lately, because life has been ‘ottersome’!

While work is getting heavier to handle, the personal part of living has been nothing short of amazing with good things I never expected to happen, happening.

One of these few moments was yesterday, when an event I help co-organize, known as “Tweet-Up Kuching @ #TwtUpKCH” was awarded ‘Social Media Gathering of the Year’ at the DiGi WWWOW Awards, which is an award like the ‘Grammy Awards’ for social media in Malaysia.

The congratulations over the win indeed poured in, as soon as it was made know that #TwtUpKCH won the award, and many were quick to congratulate me for the success.

Thank you really for the congratulatory messages everyone, but really… I don’t deserve it alone. There was a lot of people equally involved in making the event a huge success and we too need to congratulate them.

The way I see it, everyone did something for #TwtUpKCH, even the naysayers and those ‘negative-doubtful and critical’ people. Those of you who didn’t come, but tweeted about #TwtUpKCH also helped us, and what more to say the those coming and making the event happening. You guys were key to the success.

You see, while one may say they contributed close to zero to the event’s success, I would hugely beg to differ because a small contribution really goes a long way. – Talk to me personally, and I’ll gladly explain.

But anyways, I would personally like to thank Fazli (@fazlitaufek) and Fahriee (@riizad) who were really instrumental in making #TwtUpKCH happen. Without both their efforts, we wouldn’t have #TwtUpKCH at all.

Special thanks also goes out to my ‘otter half’, Dinah (@dnahsam) whom was more than supportive of the whole idea, and understood the times I had to commit myself to the event more than I could towards her. – They say behind a great man, there’s always a lady. Well, I have mine in Dinah.

Also, great massive thank you goes to Robin Wong, who represented me at the awards ceremony. Truth is, we won’t be winning if he didn’t go.

Also, the sponsors. Wow! You trusted us by backing the event, so really, Thank you!

…and to everyone who tweeted, came to the event, said good or bad things about the event… THANK YOU!

You know, we made the event happen, YOU all made it happening!

#TwtUpKCH as ‘Social Media Gathering of the Year’ 2013 made a clear statement that the Cat City, and Kuching people, are an awesome bunch! – Hats off to you!