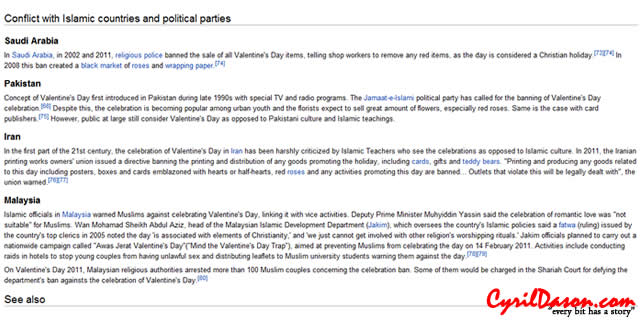 The day LOVE is celebrate worldwide. Unfortunately for some souls, they do need a special day to express their love for someone, but that for me is at least better than spreading hate.

In Malaysia, we have some souls going crazy over Valentine’s. They aren’t enthusiast over Valentine’s Day, but in fact those that grieve over it being celebrated in Malaysia. Every year, they have something bad to say about it, and this year they went the extra mile by asking Valentine not to be promoted on national television.

From where I am standing, they are making plenty of ‘wild allegations’ about Valentine’s Day, although I do admit that Valentine’s Day is a little bit too commercial nowadays, and probably overrated to some extend. But regardless, celebrating love is always something good, regardless of it being a celebration specified to any particular religion or race.

On that note, how some quarters can simply imply that Valentine’s Day is the day to promote ‘love making’ is absurd considering the whole meaning of the celebration is nothing close to that! I personally feel that if you believe it does ‘that’, then there must be some miss-guidance in your faith and I’m not pointing out any religion here.

Word that you are somewhat Christianizing yourself by celebrating the Valentine’s Day also puzzles me. I personally regard such thinking as pathetic, because believe me, THAT wouldn’t happen even if you went to church and celebrated mass with us. I think you’d have a higher chance of shaking Obama’s hand than have yourself embracing Christianity after celebrating Valentine’s Day.

But yeah, despite all, Valentine’s Day does create something ‘extra special’ for Malaysia because a quick check on Wikipedia revealed that the day has placed Malaysia on par with other ‘super’ countries in the world (as you can see below).

…and I thought we’d only be top five in pirated VCD distribution.