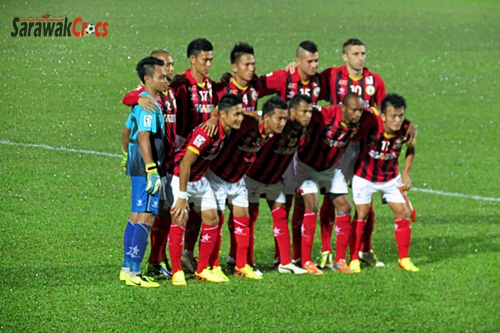 It may seem like the season ended on a low note for some ‘not so loyal’ supporters, but the loyal ones whom have been following the team for years know better.

After being relegated in 2012, many threw the towel in for Sarawak FA. Hopes were dashed, and many were certain that the Crocs are set for another dismal season for 2013.

But it didn’t happen. The Crocs instead rose to the occasion, fought tooth and nail in every game, and hence gaining respect from their foes while at the same time silencing their critics.

Even Kelantan, the only team which brought the mighty Crocs down at Stadium Negeri during the FA Cup, had to shift their play into ‘extra-ordinary mode’ as they fought hard to defeat the Crocs for their own survival.

But that defeat didn’t dent what the Crocs had in store for the coming games. The team played admirably in their coming games, and when the moment of judgement came between them and Sime Darby FC, the Crocs prevailed by crushing Sime Darby’s undefeated season, and hence pushing the team to the top, before finally finishing the season as league champions, undefeated.

It was such a feat that many had high hopes for the Malaysia Cup tournament, but then came Perak.

Perak fans stayed true to their cause by helping their team win the first game in the group stages of the Malaysia Cup as they played firecrackers, and hence disrupting Sarawak’s game play. Sarawak fell, and the critics came out in droves, yet again with their cynical comments which were aimed to put Sarawak down.

The next challenge seemed harder with Super League champions visiting Kuching, and many doubter yet again making their voices heard.

But Sarawak rose to the occasion, and sent the champions home empty handed.

The Crocs went on to rampage Perak and Kedah in the second leg, and advanced to the quarter finals of the Malaysia Cup where Sime Darby was yet again an obstacle. But Sarawak knew better, and again silenced their critics by punishing Sime Darby on the return leg to put them up against Pahang in the semi finals.

The goal of advancing to the second leg has just surpassed itself with the Crocs now genuinely having a shot at championship.

Fans were optimistic with the team, and a 3-1 defeat in Kuantan was not something seen as an obstacle. The return leg in Kuching was an assure octane game with Sarawak fans already packing their bags for a journey to the finals in Shah Alam.

But the dream was dashed in the 73rd minute when Fauzi Roslan headed in the equalizer for Pahang. Everyone knew Sarawak will not make it with time fast running out.

The fairy tale run for the Crocs was coming to an end.

When the whistle blew, some so called ‘die hard fans’ created problems as they broke open the stadium gates for no apparent reason. Others decided that throwing objects into the field was the best way to show that they were disappointed.

But really, why should they be?

Sarawak gave their fans and the nation a performance to be proud of that even Pahang head coach Dollah Salleh was seen sweating of anxiety over what may happen if his side allowed the Crocs to carry on with their assault.

The season also didn’t end as low as some as expected. Thanks to the influence of ultra group GB13, the Crocs and their fans gained nationwide coverage and respect, with many shivering of fear upon hearing they have to play against a very spirited Sarawak side. In fact, the pressure exerted by the fans, and the performance of the team some how ‘forced’ many to actually give us attention, which we all deserve.

So, if one was to say this season was bad because we didn’t win the Malaysia Cup, it is indeed time to correct them because the fact is, it was not a fairy tale ending for us, but the whole journey was simply amazing and record breaking.

Who are we? We are Sarawak!