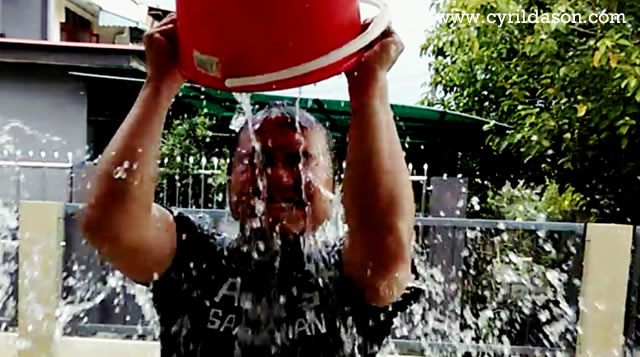 Thanks to Mike Cheng, I did the ALS Ice Bucket Challenge a week ago, which makes this post really late. For those following me on instagram and facebook, you’d know by now that I did the challenge and tagged three other friends; Fahri, Natasha and Joachim.

There’s a lot of perception on the challenge with some saying it is done by narcissist, while others saying that you do not have to take up the challenge, but rather just donate to the said organisation quietly. Many of those saying this are also saying that the whole idea is stupid, and that pouring ice water on your head while friends in some other troubled countries are not having enough clean water, makes the whole challenge even more stupid (or stupider, if there is such a word).

The fact is that the ALS Ice Bucket Challenge is a very successful awareness campaign for the disease which many people, even myself included, have not heard off (Pardon my lack of medical related knowledge). The fact that many celebrities, big shots, ministers, friends and other people are doing it, makes awareness about ALS, which also stands for Amyotrophic lateral sclerosis even more effective than ever.

Sure, the usual talks and standard campaigns you see during roadshows could also create awareness, but this is a different era. People do not want to hear about something, they want to do something about it, even though it is just pouring a bucket of iced water on their head.  To make it even more interesting, the whole thing is fun, and I bet many of you have not felt how ice water feels like when poured on your body. Now, here’s a great excuse to learn how it feels!

In fact, before I even did the challenge, I did Google up about the disease and that has caused me to know even more about it today. Even though many like me may not know everything about ALS, I think it helps that the masses know that such disease is available and that they need funds for research to help find a cure.

Just in case you are not sure what ALS is, it’s basically a progressive neurodegenerative disease (related to your nerve, just in case you didn’t get that) that affects nerve cells in the brain and the spinal cord, causing you to become paralyzed, and in some cases, die.

So yeah, the ALS Ice Bucket Challenge isn’t about being narcissistic at all, but it does help for a greater cause which is to create awareness. On top of that, the donations that do come in from the masses have driven up millions ($94 million so far)  while at the same time giving ripple effects to local organisations which many seem to also help when they can’t donate to the ALS organisation (since it is based in the US).

That said, if you are interested to learn more about ALS, check out their official website and before you go, here’s the full video of me doing the Ice Bucket Challenge.

p/s: Just in case you are wondering, Joachim has done the challenge and Natasha has decided to give out a donation to a local charity to answer my Ice Bucket Challenge tag.