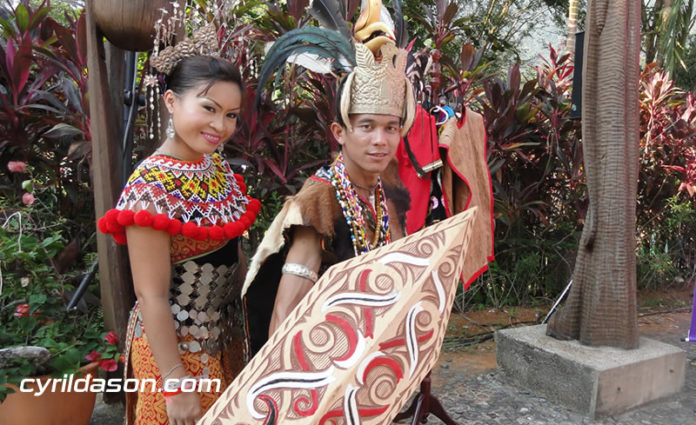 Of late, I admit.. I have been lashing a lot at West Malaysian. I have said that they are ignorant and insensitive towards Sarawakians. The feeling erupted even more when the Sarawak state election was held with so many West Malaysians coming over to Sarawak doing their bit of campaigning for the party they support.

Well, let me make the record straight that I am not anti-West Malaysians. I’m just annoyed with the degree of ignorance some have over Sarawak. While I must admit that I am lucky that I have access to basic amenities, I am still very much attached to my village in so many ways.

Let me explain. My parents are both from villages which are about an hour from Kuching. My dad’s side was better off as his village was a couple of minutes from the Serian town, but my mums side was a little over 5 minutes now from Bau town. Being so close to Serian, my dad’s village or as we locally call it ‘kampung‘ was always the first to experience development be it the entry of Hitz.FM to Kuching, or proper treated water to their homes.

The same can’t be said for my mum’s kampung. When I was younger, the journey took an hour to reach my village from Bau Bazaar. Back then, my grandpa had this blue jeep, in which my cousins and I used call ‘moto babai‘, while echoing the sound ‘uuuttttttt… uuuuuttt..’.  The road wasn’t only terrible, but my mums kampung relied on mountain water, and a generator kept the kampung alive at night from 630pm-12midnight. This was about 10-15 years back. Today however, there is a proper sealed road right into the gardens, electricity and what’s up-coming is a new telecommunication tower which promises not only mobile phone penetration, but better a possibility of broadband. My grandpa has also upgraded his ride into a Toyota Liteace 10 years ago due to a better road. Mind you, before all this, my mums kampung was a stronghold of opposition parties like SNAP and STAR. Development never came until BN won.

You see, while many West Malaysians continue to say Sarawakians are ‘stupid’, ‘idiots’, or ‘should be left to be led by a corrupted man’ over the internet, particular on opposition website and news portals, many fail to realize the challenges Sarawak still has to endure particularly in terms of infrastructure.

Yes, the length of time may not justify the wealth of Sarawak when you mention of timber, oil and other riches Sarawak has… but many West Malaysians fail to realize that a huge bulk of Sarawak’s income doesn’t go back to Sarawak, but it goes over to the federal government to develop ‘Federal projects’. Maybe that’s why most Sarawakians would personally feel that Sarawak would be better off without joining Malaysia. This sentiment grows largely due to the lack of interest shown by the federal government to develop Sarawak to be on par with West Malaysia. It’s bad enough that Sarawak has one of the most challenging geography in Malaysia, and put ‘that’ with the inadequate allocation (which is not even matching Selangor or Johor), what would you expect?

With that said, I believe the Sarawakians have spoken via the ballot box, and judging from the figures, the rural people are still trusting BN to help them bring in development, no matter how slow. They choose BN because BN was harping on continuous development for their area, and they trust BN could deliver that promise. In fact, some of the local BN candidates are working hard for the people hence the increase in votes for them. PKR didn’t enjoy the best because they focused their campaigns on the religion, corruption and one ‘white haired man’. These issues are not the utmost concern of folks which are yet to experience proper treated water, a sealed road, and other facilities urban people enjoy.

If there is anything this election showed, it was the reason why the divide across the sea is still very wide and would be getting wider by the day. While the urban Sarawakians are on par with their internet savvy west Malaysians and are now looking towards better governance, those in the interiors of Sarawak are still working towards getting the basics of life. Urban Sarawakians, unlike their counterparts however realize that the rural folks are still very much struggling to catch up, and know that it takes more than tweets and useless comments on the internet to help them change. Meanwhile, most West Malaysians which have not seen or experienced such hardship will continue to discriminate and look down upon Sarawakians for not following their wishes to vote for ‘change’, yet these same people again and again fail to realize that instructing Sarawakians to do what they want without realizing what’s happening on the ground makes them equal to ignorant leaders as well as the people they may want to vote out of power.

In fact, the win in Krian and Bakala’an, (both rural constituent) by PKR was indeed not because PKR was the better party, but rather because it’s candidates has been living and helping the people way before elections have started.

With that said, I must state frankly that if the opposition parties in Sarawak only show up during elections, particularly in the rural and semi-urban areas, you have my bet that BN will continue to get their votes because unlike the opposition, BN actually has a proven track record with them, yes.. regardless of it being not so impressive.