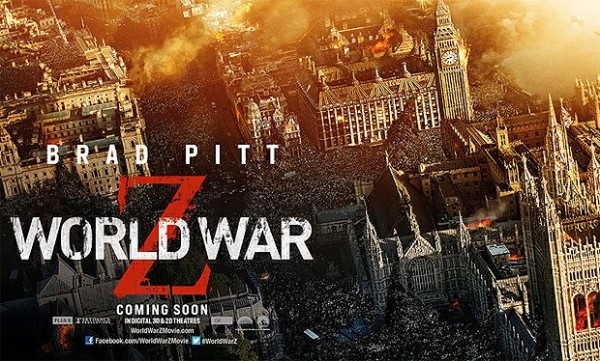 If you are a movie goer, I bet you’ve seen the trailer of Brad Pitt’s latest action movie, World War Z. If you haven’t, hey, no worries, I’ve embedded it below for your pleasure.

Anyway, apart from the trailer, there is nothing much to shout about in this movie as I felt it was lame and a stale, with the movie trying a wee bit too hard to cover so much in a two hour movie.

Zombie movies can hardly go wrong, but World War Z somehow failed to make sense, if compared the likes of Resident Evil and Doom. In fact, I would go as far as question Brad Pitt’s role in the movie, which I felt was ‘weak’, despite him being the main character.

For someone who loves connecting movies to real live scenarios (even fiction movies must have some reality), I simply can’t look beyond the fact that Brad Pitt survived a deadly plane crash, and evaded almost dozens of close encounters with zombies, without much effort, I must say. A typical case of the hero lives on to the end.

The most shocking part of the movie must be the ‘best hope of man kind’ shooting himself accidentally within minutes he was introduced, giving his all important role to, yep, you guessed it, Mr Brad Pitt aka Gerry Lane, which for no apparent reason and motivation goes on to find more trouble.

To say Brad Pitt was motivated by his country would seem incorrect as he (Brad Pitt) only wanted to go on the mission to safe guard his family, but somehow found himself willing to continue on with the mission despite knowing his family has been moved to a refugee camp, in which he claimed to be ‘not safe’. – Seriously? If it was me, I’d demand they were transported back before I go on. I mean, I’m doing it for my family, right?

And then, there was this moment where Brad Pitt managed to amputate a hand with an army knife. Ohhh… and I though human bones were hard to cut. Guess I’m wrong. – Did I mention the girl (Daniella Kertesz) didn’t have massive bleeding problems at all and was even strong enough to carry Brad Pitt all the way to a WHO facility?

To top it off, there was one part of the movie which I felt was a little bit racist, because this scene showed the goodness of the Israelis, while somewhat depicting the Palestinians as the cause Israel fell to the Zombies. Of all people, why must it be the Palestinians being the culprits? The movie could do away with the Palestine flags to be honest.

Truth is, I still wonder why despite numbers of helicopters hovering around the huge wall of Israel, none bothered to shoot at the Zombie pile-up which gave the undead access to the safe Israel.

Zombies in World Ward Z were however interesting to watch as they were fast, agile and nasty. They even get super agitated upon the death of their friends! Bet you didn’t expect that!

Regardless of that, World War Z is just an ordinary action zombie movie with a poor plot. As I left the cinema that day, I felt it was like watching a movie which had no ‘head’ nor ‘tail’, hence making it just entertainment without any substance.

My suggestion to zombie movie fans would be to catch reruns of Resident Evil if you’d want something more exciting.