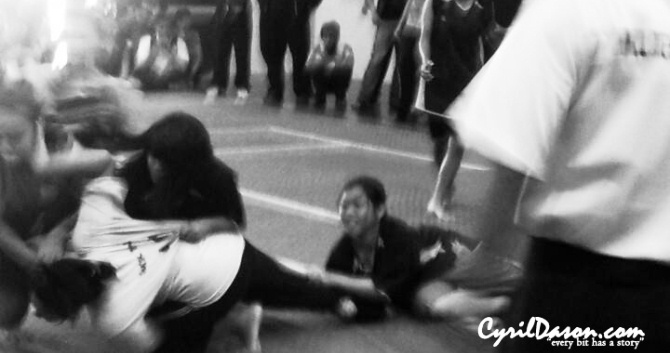 You know that feeling you get when you see how lucky kids these days are?

Well, I had ‘that moment’ today when I watched the Kabbadi finals held. I know, those born in the 80’s would go; “Kabbadi? How do you play that game?”

To shed some light, here’s a video I recorded from today’s finals between SMK Matang Jaya and TUNAZ.

I head a colleague tell me that the day before, some students came away with some injuries, and as the video reveals, you’d hugely expect just that. The female version however is less aggressive with shirts being pulled more often than bodies.

So back to ‘that moment’.

You see, during my days, the only game we had was football/futsal. It was either that or a non-contact game such as badminton or volleyball. Basketball was also available, but I was more of a laughing stock when it came to that game. Football was my game, but I had no skills nor talent, and that’s where games requiring less foot talent came in.

In my early 20’s(Oh shit I can actually say that now!), I saw this movie ‘Dodgeball’ featuring Adam Sandler, and I wished it was introduced in my school years, but then again, that was a long dream of mine as I’ve left school, and the game was never popular in Malaysian schools due to lack of support from the ministry (or so I know).

Now, I see this game Kabbadi being played in school and it’s now gaining interest because the Ministry of Education is actually supporting the growth of the game. From here I was standing, the game is physical and skills aren’t priority to win. It does however require a good body built and some fast thinking/strategizing, both things which I would easily pass if it was introduced when I was still in school.

So now I wonder why are our kids are spending so much time in front of the monitor when they have such exciting games like this available at their disposal. Add other programmes like the F1 programme, the robotics programme, the school idol, the PERMATA project and many more… yeah, WHY ARE YOU FREAKING STILL SITTING IN FRONT OF THE COMPUTER POKING YOUR FRIEND?