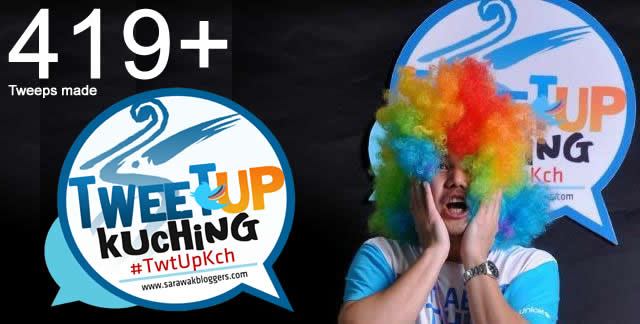 I’m not a man with much words, and I am most certainly a person which would want to say something would be awesome, fantastic or epic before it happens. Yes, in other words, I am reserved until I see it happen. (Below are some photos of the event. Photos without my watermark are from The Collective.)

Tweet-Up Kuching 2011, or in short #twtupkch 2011, was planned in less than 40 days, with Sarawak Bloggers as the back bone, and an initial target of 50-100 to attend. There was many challenges for the event, as we had to jumble our personal calenders with what will happen during #twtupkch. I had a family engagement for a week in KL prior to #twtupkch, and most of the committee including myself weren’t really experienced in organizing massive events. To top those off, was the fact that no one was actually getting paid, and everyone was doing it part-time or more specifically during their free time.

Sponsors & partners were targeted based on our requirements/needs. In fact, I saw that many were interested to help out when they know we were really doing it out of passion, rather than profit. The outcome of this effort was of course us having a strict budget, but then again, with the help we got, that didn’t matter. We are, after all not a profit making organization or company. Our core business in Sarawak Bloggers is to have fun, while promoting the good use of social media for networking and of course unity. Profit is the least of our concern.

Thankfully, DiGi, Faradale Media-M, The Collective, AMP, Stepholic, The Spring Kuching, BCCK and Happenings In Sarawak were more than keen in helping out, hence making things so much easier. I have also got a little help from some other contacts/people, but due to their request, I am not able to mention them publicly.

Well, as #TwtUpKch grew closer, the anticipation also grew bigger. Two weeks before the event saw over 250 tweeps registering, and the number grew by strides as the event came closer. Two main concerns popped up constantly, which is: ‘what to do with those 250 people’, and ‘how can we retain them at the event until 4PM’. Even when I was away in KL, the committee and I were constantly updating each other on the progress. On Friday 9 December 2011, at set-up time, the RSVPs for #TwtUpKch stood at 375, over 3 times what we initially expected. The volunteer list also ballooned unexpectedly.

On 10 December 2011, I bet most of the committee woke up early, and headed to The Spring. We all knew that much needed to be done for #TwtUpKch. I woke up at 7am, and got to the T-shirt shop to meet @FazliTaufek where we were expected to collect the limited edition t-shirts. @Fahriee was dealing to things in the venue until we arrived.  There was about 320 t-shirts expected. Unfortunately for us, at 9AM, the t-shirts were not available yet, but we were promised they would send us at least 255 (white) by 11AM to the event venue itself. Unfortunately, at 11AM, only 50 white t-shirts came and the rest arrived about 2PM. The late t-shirt arrival gave us organizers it’s fair share of problems, but let’s not say more about this. As I observed, many tweeps were understanding over our plight and didn’t give us further headache. Kuching people are simply amazing!

The event itself was something. As organizers, we were worried about the response and the crowd. Being a Kuchinginite myself, I know how the Kuching crowd can be, but yes.. we had a very mixed crowd that day. I could see people of all ages crowding the North Court of The Spring making noise. The atmosphere was so casual, yet so lively that the event just ran up so smoothly. Feeling that things might be different online, I checked the #TwtUpKch timeline, and wow was I impressed! There was so many positive comments, that I felt a tear fall of my cheek. The feeling I had was indescribable.

To top that up, I haven’t noticed anyone complaining about the lack of freebies at the event, but focused more on how they met new friends, and how the new talents during the event simply shined!

I can’t speak for all 419+ tweeps that came, but I think despite whatever small hick-ups #TwtUpKch 2011 had, it has met its sole objective to bring tweeps together. As an addition, we also managed to unearth new talents (did I tell you how I fell in love with each and every performer? OMG, they were just mind-blowing!!), and showed how passion can really fuel something to be a great success. The crowd, and the tweeps were equally sporting and happening. Their support just made #TwtUpKch epic! At this post time, the #TwtUpKch timeline is still buzzing!

I’d really love to thank everyone personally for helping with #TwtUpKch, but there was just so many of you. 419+ of you.. I mean, whoooaaahh!! but really guys, THANK YOU! #TwtUpKch was by friends, for friends, to make new friends. Man, I love that tag line because it’s a true reflection of how TwtUpKch happened.

BTW, do you know how you feel after coming back from the best ever event that you do not want it to end, something like the Rainforest World Music Festival (RWMF)? Well, I’m having that moment now, and it feels amazing. If you spot me having this silly grin on my face, it’s because of all of you which made #TwtUpKch happen. Hell yeah!

Do visit www.twtupkch.com for more info in Tweet-Up Kuching