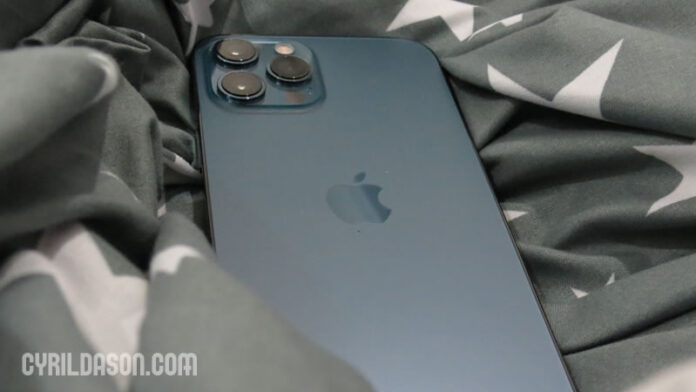 This is the Apple iPhone 12 Pro Max.

How and why did I get it? You can read all about it in my previous post.

But if you malas want to do so, suffice to say, it’s precious to me.

This is a review of the Apple iPhone 12 Pro Max after I’ve used it for about a month.  This means I am already pretty accustomed to it.

Aside from that, you must also note that I was, and I am still an Android user, making this shift to the iPhone a huge deal.

Before you read on, I hope this review will be different. I will tell you what’s what, and leave out things I think is too technical.

That said, here’s diving into the review.

The screen and body of the iPhone 12 Pro Max is beautiful. The matte back looks good, and I personally like the deep blue of the one I own.

The camera bump is there, it looks ugly, but it’s up to todays trend. I would prefer a more centrally located camera, but I don’t think Apple has ever done that.

This time around the Apple decided the iPhone should have sharp edges instead of curved edges. This is different from Android phones which tend to be curved.

At first I didn’t mind the 90 degree edges, but this 6.7-inch Super Retina XDR display phone didn’t feel right in my hands. The edges felt sharp and boxy. It was slightly uncomfortable.

The long notch is intrusive, but I grew to ignore it.

The phone feels firm and strong, but I do not trust glass no matter how strong one claims it can be.

That said, I decided to buy a case from Lazada under the brand XUNDD which just cost RM19.

I’ve bought this casing for my older phones before and I found it not only protected my phones from accidental drops, but was also light and thin.

This gave me confidence when handling the phone because a phone worth over RM5,000 needs to last at least two years before there’s any talk of getting a replacement. | Buy exact XUNDD iPhone 12 casing

I would say I am very impressed with the audio system of the iPhone 12 Pro Max.

Despite only having speakers on the rear end of the phone, the sound produced is good and clear.

On headphones or my TWS earbuds, the sound produced is also crisp and clear. No complaints really.

This Apple’s 2020 flagship phone ships with the A14 Bionic chip and I have to admit, it feels fast.  Yes, faster than any Android I’ve used.

It’s surprising since the iPhone only boast of 4GB RAM as reported by GSM Arena, but feels so much faster than any 8GB RAM Android phone that I’ve used before.

On top of that, while Android phones seem to overheat during extreme task like recording videos, this Apple iPhone doesn’t.  It remains cool and performs admirably.

Bigger storage in the phone comes with hefty prices.

I am using the 256GB version. It’s adequate, but bigger storage is always better.. I’d prefer a 512GB phone, but that literally shoots the price of the phone to Mars.

The 256GB storage remains hefty in my phone, but unlike when I was using Android, I actually control how much apps I install in the iPhone.

I had to subscribe to additional iCloud storage to compensate the lack of storage in the phone, and I disabled syncing (and backing-up) unimportant data with my iCloud to save space. Apple gives 5GB of free iCloud storage, but with the camera taking photos in high resolution and massive megapixels, that’s used up pretty fast.

So I blew up my iCloud storage to its optimum within just a week of using the phone.

De-syncing some apps to the iCloud saved me some space on the iCloud, but I still had to subscribe to the paid service since I wanted my important documents saved.

Being someone who used Android phones for years, the change to the iOS ecosystem wasn’t hard.

Apple did an amazing job with their iOS. It’s snappy and pretty stable. I’ve not experienced any crashes or problems with the iOS to date.

Yes, there’s lack of customization if compared to Android, but who changes their phone theme every day? At least not me.

One of the first things I noticed when using iOS was how fast apps got installed.  A quick double tap at the side of the phone installs apps within less than a second. It takes a few more extra seconds on Android over the same internet speed.

When it comes to social media, the iOS 14 outperforms their Android counterparts as well. Apps are stable and they present themselves better.

Of course there’s a need to get used to how iOS apps swipe, forward and share, but overall, they do perform better in general if compared to Android’s version.

If there’s two things I dislike about iOS 14, it would be the camera software and the calculator.

The iOS camera apps resets to the 4:3 ratio every time I open the app, and the iOS calculator requires me to retype the whole equation if there a typo.

I largely wanted the the iPhone 12 Pro Max for its camera.

It’s supposed to be better than the rest, and the shutter speed of ƒ/1.6 is faster than most other flagships by Android.

As I said above, the camera app is disappointing, but this doesn’t hurt the performances of the camera which I would say is worth the hype.

Well lit images come out superbly, but when it’s dark, the images are second to none, by far.

Thanks to the fast shutter speeds, it’s also easy to capture moving objects and this is important if you don’t want to lose precious candid moments.

Below are some photos I’ve taken with the camera in different modes.

All modes are in automated setting because I am not a pro who knows how to interchange ISOs, colour depth etc.

Android phones like to boast they have the ‘biggest batteries’ in a smartphone.

The iPhone 12 Pro Max has a humble 3687 mAh non-removable battery which can last at least 1.5 days on my usual day use.

Charging on the other hand does take more time because Apple decided to exclude the charging block in this phone, and I had to use whatever charging block I could find.

However, I do find myself charging the phone less due to the battery life, and this is good.

After using the Apple iPhone 12 Pro Max for a month, I can say that the smartphone is growing on me.

I love how the iOS is snappy and stable, and I do like the battery life and the overall look of the phone.

I am contented with the storage and shape, but I do feel that the camera and calculator software could be better.

The iPhone 12 Pro Max is sold at selected Apple retailers which are both available on Lazada and Shopee.