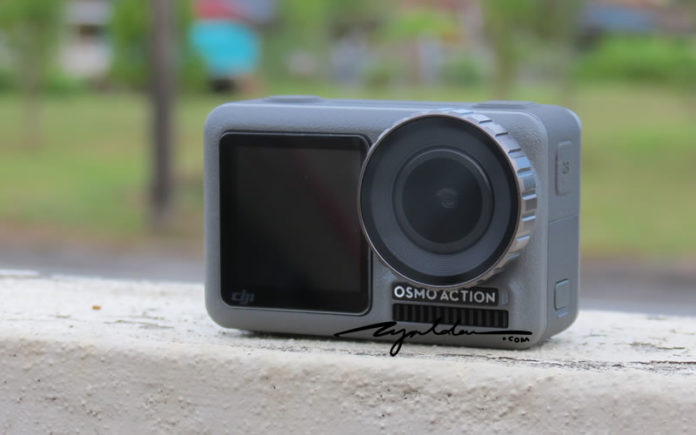 I’m going to talk about the DJI Osmo Action here in detail.

If you want the shorter version of this post, go to Borneo Bloggers as I did a brief review there as well, with ratings of important details.

THE SPECIFICATIONS OF THE DJI OSMO ACTION

They don’t call the Osmo Action the GoPro Hero7 Black for nothing.

Specifications wise, the Osmo Action either beats the GoPro Hero7, or matches it.

General specifications of the Osmo Action can be seen below.

WHY IS THE OSMO ACTION BETTER?

Based on reviews this post would detail out why the DJI action camera is better.

However, as I got it last week, I can spell out a few things that I liked about the camera. Note that I can’t compare the Osmo Action with any GoPro camera because I have never owned a GoPro.

I am able to compare it with my Samsung Galaxy Note9, and my YiCam Lite 4K.

First off is the hard case that comes with the camera. The hard case adds to the 11m waterproof feature. It makes it more durable and it also looks good.

I’m also a huge fan of the front facing screen which allows me to see if the camera is pointing correctly when I shoot.

I also liked how the buttons are well arranged with specific functions. This allows easy navigation when using it. For example the button below allows immediate change of the screen, or photo taking while recording.

Separate buttons for separate functions is good because its less confusing.

Before I talk about the image and video quality produced, you must remember that the Osmo Action is an action camera, built for videos.

I’m saying this because there’s limitations when taking videos and images.

Personally, I am happy with the image and video quality of the Osmo Action.  However, there’s no zoom function, and the videos aren’t great when taking shots at night.

You can check my video of the RITC2019 below.  It was shot in little light and you can see how the video turned out.

Yes, overall, the videos were decent, right? Do note that the video featuring the projection at the end was shot using my Samsung Note9.  This was because the OSMO Action couldn’t capture the projection well.

During the day, videos using the Osmo Action were good. I shot a short vlog using the camera below and you can judge the quality for yourself.

I’m still getting used to the functions available, so until I master them, I can’t say much about if they work as good as they are supposed to. Maybe I’ll do another review after a couple of months. We’ll see.

Not everything is great about the Osmo Action. I didn’t like the fact that it was difficult to take the camera out of the hard case and would have preferred if the charging port and memory card adapter was easily accessible without taking out the case.

I also didn’t like the weight of the camera which was slightly heavy and noticeable at if you are using a selfie stick. The Yi Camera Lite was lighter.

On top of that, I didn’t favour the editing apps provided by DJI, the DJI Mimo. It did basic editing but was no where near what GoPro’s QUIK had to offer.

Also worth to mention I guess is the difficulty in editing the videos from the Osmo Action.  I use Filmora and video playback from videos recorded with the Osmo Action cause lag during editing.  This does not happen when I edit videos recorded using the Note9.  I’m not sure of the cause, but I’m guessing it may be due to the video format I’m using.

IS THE OSMO ACTION GOOD FOR VLOGGING?

With the front facing camera, the DJI Osmo Action is perfect for vlogging.

The image produced is sharp and I was happy enough with the quality of the sound it could capture without an additional microphone.

Aside from that, the image stabilization beats what the Note9 could offer.

Another plus point is that its 11m waterproof, which means I could literally run on ground and jump in the water (or take a shower) while still shooting.

WHERE TO BUY THE OSMO ACTION

When I bought mine, I looked at Shopee. After comparing several packages and offers I found the following offers minus courier charges) :

The packages above are cheap especially when you factor in the prices of the additional kits or the memory card.

However, let me fairly warn you that most of the Osmo Actions sold under the packages above are only covered by local dealer warranties. This means that if there is a problem with the Osmo Action purchased, you’d need to send it back to the dealer you bought it from as the camera might likely not be covered by the authorized DJI agent in Malaysia.

If you want the full Malaysia (and worldwide) DJI coverage, I’d recommend buying directly from DJI.

It cost more at RM1,499 (USD349) but it offers free shipping and the warranty is guaranteed.

That said, the choice is yours. I hope you enjoyed my review nonetheless.