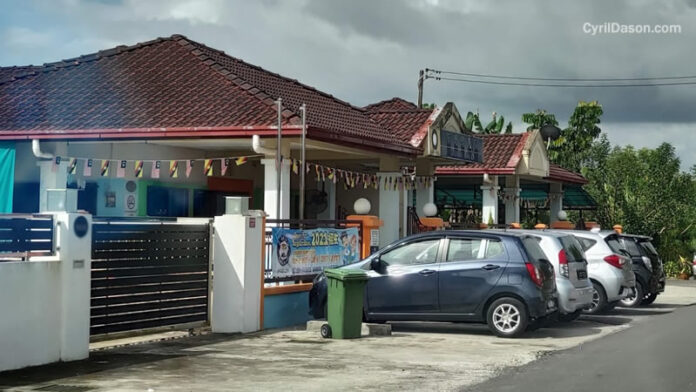 Before you read on (or comment), please do note that I am not comparing this kindergarten to others, but rather sharing my opinion and experience with this particular kindergarten after using their services for two years. – They may not be the best kindergarten in Kuching to you, but they are the best to me.

That said, two years ago, I pulled my daughter out of a certain kindergarten after I realized some changes in her behavior after she attended the ‘school’.

You can read about it here.

Then, I moved her to another kindergarten, which I had described here.

I didn’t name the new kindergarten at that time due to privacy concerns.

However, since my daughter had successfully graduated this year, I can now tell you more about the best kindergarten in Kuching which she attended.

The kindergarten in concern is named Tadika Johan.

The name doesn’t sound like it’s a Chinese speaking kindergarten, but the kindergarten uses Mandarin as its medium of instruction.

It is a private kindergarten in Matang Jaya, which also adheres to the Malaysian Ministry of Education syllabus.

Despite that, the kindergarten doesn’t emphasis too much on the number of A’s a child gets, but rather the development of the child which includes outdoor activities, and Science and Mathematics.

Unlike some other kindergartens, Tadika Johan is not part a franchise.  It is a small family operated kindergarten.

I guess because it isn’t huge, they could maintain their quality and provide the best care for children sent to them.

The kindergarten occupies two semi-detached houses, dividing each house into several classes according to age.

The compound of the kindergarten is well maintained and kept clean at all times.  As I observed, cleaning is done almost everyday after class is completed.

THE STAFF, THE DIFFERENCE

The principal of the Kindergarten, Mdm Wong, is a nice lady, who is easy to talk to.

Communication is made by WhatsApp most of the time, but once you get to talk to her, there’s plenty to share.

Under Mdm Wong, there’s six other teachers whom in my observation, love every second they spend with the kids.

When my daughter transferred to the kindergarten back in 2019, she was fearful of school (read why here), but that changed thanks to the staff of Tadika Johan.

Just after a couple of months, my daughter just can’t stop talking about her teachers and friends, to the extend I could actually name them all.

These teachers would greet my daughter from the car every morning, and walk her into school. The same was done when she goes back.

Most of the time my daughter would complain that I pick her up too early from ‘school’ despite the fact that I am actually 10 – 20 minutes late.

During the two years my daughter went to Tadika Johan, I had observed that the teachers went above and beyond to give their best despite the many shortcomings (particularly due to Movement Control Order (MCO)).

MCO AND HOW THEY HANDLED IT

The MCO period was hard on everyone, but I think Tadika Johan did exceptionally well to soften the blow.

In fact, I was personally impressed by how far Tadika Johan managed the whole ‘class from home’ situation.

With students not able to go to Tadika Johan, classes were done online.  Online classes are a challenge even for university students, so getting children under seven to do online classes is a totally whole new challenge.

To address online learning problems, Tadika Johan decided to prepare weekly/monthly bags for their children to learn from home.

These bags would paired to daily custom made videos, which are used to teach the children.

These custom made videos had their teacher’s voice and my daughter really looked forward to it daily.  For a good hour a day, she would take over my laptop to study and finish the task given.

Of course I still had to monitor the lessons, but the videos (and exercises given) were pretty much self explanatory.  This made it easy for the kids so they could literally help themselves at the lessons.

At the end of the week, I would have to send in my daughter’s home work for marking to the kindergarten, and then get another set of items for the next week/month lessons.

Yes, the online lessons aren’t as effective as face-to-face classes, but knowing that the staff of Tadika Johan actually created custom videos, just to send to the kids was really something.

Creating videos, particularly education ones, are not easy.

I am ashamed to say that my education videos which are made for my own classes on my Youtube Channel, are much worst than those made by Tadika Johan. – Despite the poor quality of my videos, I still spend a good 2 – 3 hours making each video, so I can only imaging the effort and time taken by the teaching staff of Tadika Johan to do theirs!

Adding to the fact that these teachers also marked the exercises given makes me really appreciate what the kindergarten has done.

GRADUATING CLASS OF 2020 UNDER MCO

Graduation of my daughter’s class of 2020 was a tricky event to navigate.

Tadika Johan used to have impressive graduations like what I enjoyed last year for the class of 2019.  My daughter looked forward to such an event as she called it ‘concert’.

It was the one time she could learn dancing and performing on stage, and if last year was to be a benchmark, my daughter would be asked to stay back for practice a couple of weeks before the event day.

However, such an event was not possible this year due to the MCO.

With the MCO further extended to the year end, the kindergarten had to be creative in ‘graduating their students’.

A much scaled down, student only graduation was planned, and a graduation video was also made in place of what should have been a ‘concert’.

Sure, it was less fun if compared to the former years, but I personally felt Tadika Johan went all out to ensure the kids knew graduation was special to them.

At the end of it all, a special video was also shared with us parents, and it was really heartwarming to see the kids in their graduating robes.

Aside from that, Tadika Johan also sent photos of my daughter in her robe, a class photo, and a family photo of us at the graduation party they held for the kids. – The graduation party was held in full MCO compliance with parents only arriving for photo taking and to take back their respective children.

THE BEST KINDERGARTEN IN KUCHING?

Looking back at all Tadika Johan has done for my girl, I am biased to say that Tadika Johan is probably the best kindergarten in Kuching.

The management is professional and good, the teachers are dedicated, and the kids are happy to be there.

I know for a fact that some may not agree with me, but hey, this is my opinion, and you also have yours.

That said, thank you Tadika Johan for an amazing two years, and for also accepting my daughter in 2019.

Words can’t express how happy I am for what you had done for my daughter, and I hope you will be around for years to come.

Unboxing items from the 11.11 Sales by Lazada