I just came back from Siem Reap, Cambodia for my mid-year holidays, and here’s a list of places I went, and didn’t go with some brief explanation.

Each place is given a brief review, perhaps as a guide for those wanting to plan a trip to Siem Reap. 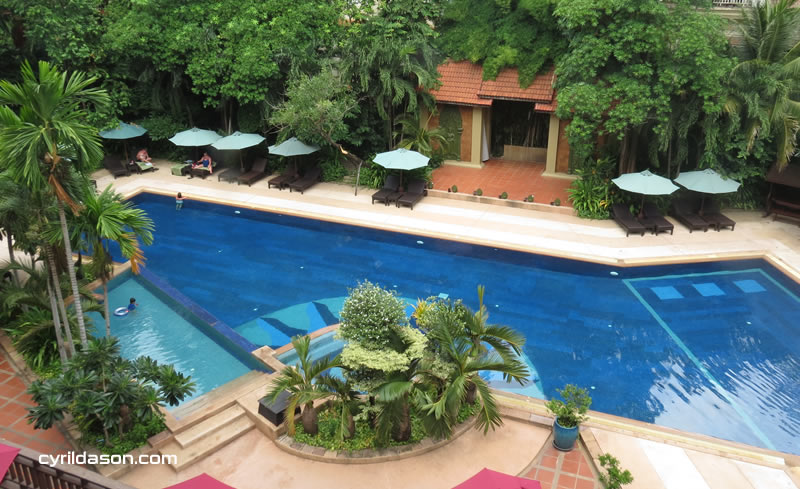 Prince D’Angkor Hotel & Spa
There’s a lot of hotels in Siem Reap, but with great prices offered here for Prince D’Angkor Hotel and Spa, a lovely stay at this five star hotel was more or less confirmed from the day we set eyes on it. The highlight of the hotel is the huge saltwater pool, said to be the biggest in Siem Reap as the staff could easily become a benchmark to other hotels. The breakfast spread however is ordinary, and the bed isn’t the softest I’ve slept in, and the Wi-Fi is somewhat unreliable despite its good coverage. In terms of location, Prince D’Angkor is about 1KM away from Pub Street, which is the main tourist area of Siem Reap, and restaurants, malls and supermarkets are located within 5 minutes from the hotel. A good place to stay, if you can get the right rates here. – Photo shows the salt water pool of the hotel

Eating out in Siem Reap isn’t hard as there’s many restaurants located around the city. Here’s the places we managed to try out.

Staff at Old House Restaurant were friendly and the best thing about this place was the fact it had air-conditioning. The food was not bad, and the price was also welcoming despite the cooler atmosphere. – Photo shows the interior of Old House Cafe

For a place with the name ‘Lucky Burger’, one would expect they have the best burger in town. Unfortunately for Lucky Burger, this is not the case. The burgers were ordinary and the patty was hard, and it tasted something like KFC, hence making it ordinary. – Photo shows Lucky burger’s french fries packet.

A lovely family operated restaurant that has very friendly service with good prices. This was our first taste of Cambodian food and I think the fresh rolls here are the best we had during our trip. – Photo shows Lilypop Restaurant from the inside.

This place came highly recommended on TripAdvisor and they delivered. However, when our food arrived, we were asked to move so that a larger crowd could sit in the shop. While I felt the food was not bad, I didn’t like the fact my group, with a young child, had been asked to move and give way to another. – Just because I said OK, it doesn’t mean I was happy. – Photo shows the restaurant from the outside.

The dusty road where this eatery is located is very unwelcoming to be honest, but the menu of My Little Cafe is huge and the dishes were incredibly delicious. The place seems popular among ‘Ang Mohs’ with hardly any locals eating there while I was having lunch. The mango shake was one of the best I’ve had while in Siem Reap. – Photo shows the interior of My Little Cafe 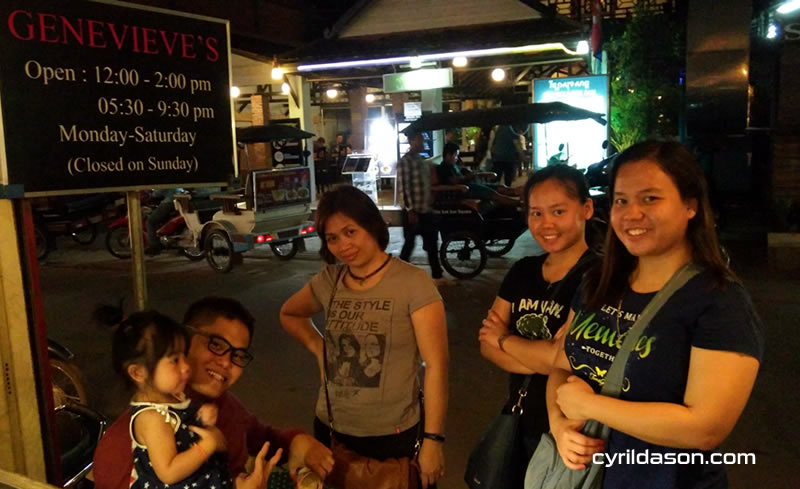 A real gem in Siem Reap because it boast of one of the best service and food to make you fall in love with the place.  Located just outside of Pub Street, Genevieve’s restaurant was found by us on TripAdvisor, and it was one of the highlights of our meals in Siem Reap. To top it off, their prices weren’t high and were largely affordable. – Photo shows the gang in front of Genevieve’s Restaurant.

The Pizza Company is similar to Pizza Hut, a popular ‘mainstream’ pizza place in Malaysia. The place is a Siem Reap local magnet and the pizzas are average. I personally loved the bread sticks, but I’d prefer not to return if given the choice, simply because it’s ordinary. – Photo shows the pizza served at The Pizza Company 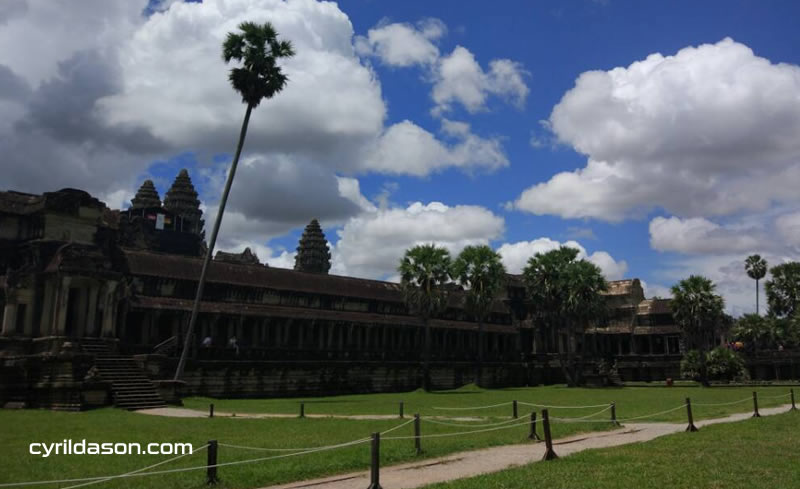 Most people go to Siem Reap to check out the UNESCO listed Angkor Wat, but we decided to skip it as the USD37 (MYR160) ticket day fee was too high, and that doesn’t include transportation to the ancient city. All I wanted was a photo in front of the Angkor Wat, and that shouldn’t cost as high as MYR160! My sisters did however go, and they spent less than 3 hours at the site, returning after getting some photos. – Photo above shows The Angkor Wat.

Since I stayed in town for the whole trip, here’s a list of places I did check out. 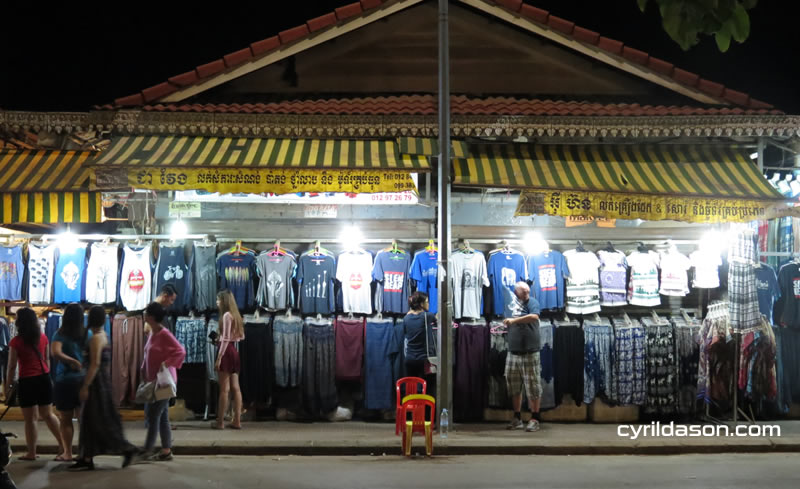 During the day, it’s your typical Asian market, selling everything from groceries, to hardware items, to souvenirs. At night, as the market closes for the day, souvenir pop-up stalls appear to cater for the growing number of tourist in Siem Reap. Personally, it felt like a pasar malam, ordinary with nothing much to see except the same souvenir things. – The photo above shows the Old Market at night, when stalls selling souvenirs start popping up. 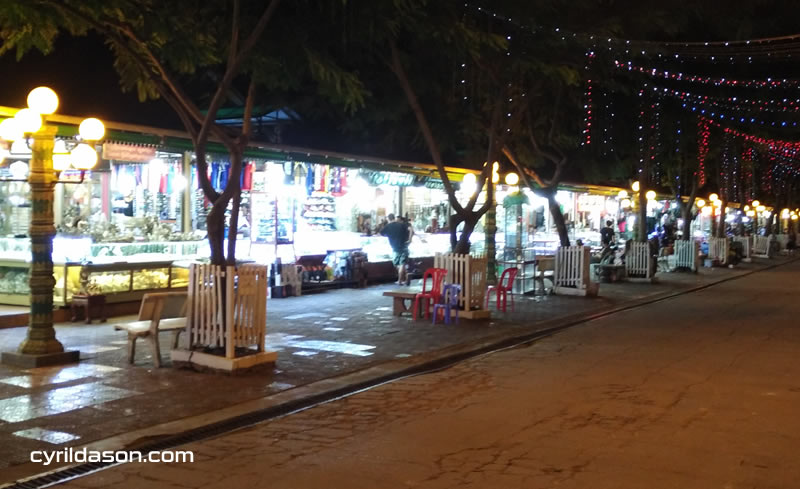 The place is a good place to search for souvenirs, if you dislike the more crowded and hectic Old Market and Pub Street area. Prices of these items here are also generally cheaper as it is quite far from the main tourist spot. Unfortunately however, when I was there, one of the shop/stall owners was seen shouting at a customer for haggling, as she called the customer ‘crazy’ for trying to buy an item at only USD1. – The photo above show the front of the Siem Reap Art Center. 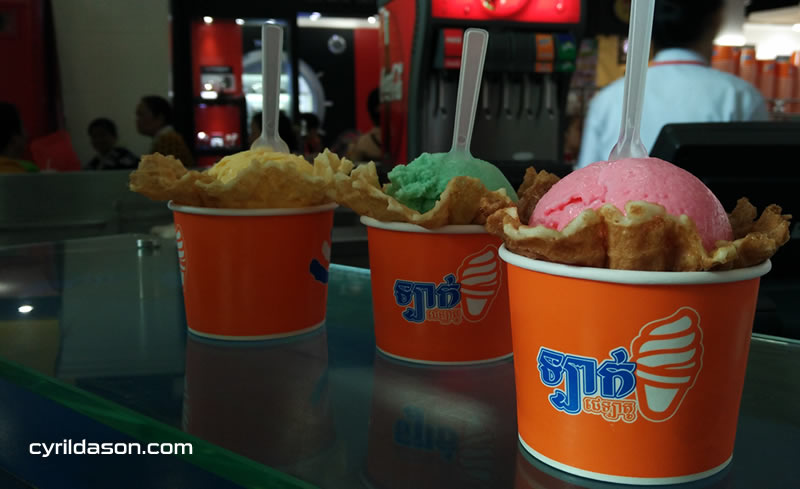 Said to be one of Siem Reap newest malls, it is rather small. We spent less than 10 minutes in the mall which has a supermarket, a few cloting shops, an electrical shop and a stationary shop. This place has one eatery, called Lucky Burger. – Photo shows ice cream from a local ice cream stall in the mall 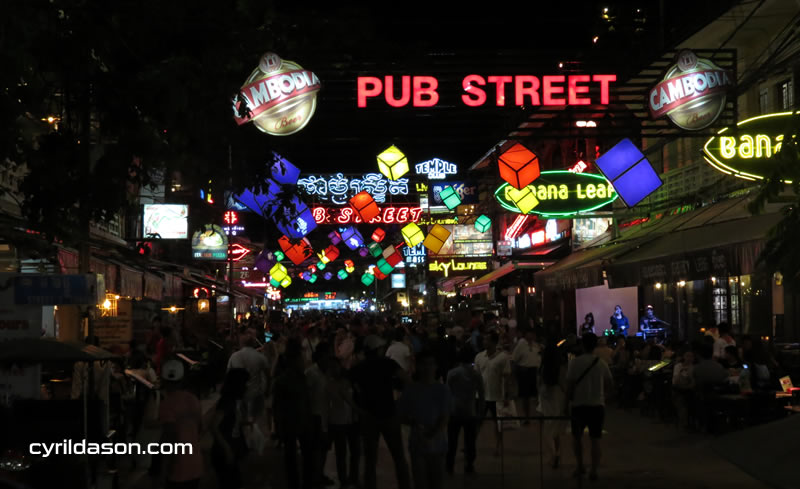 Pub Street mimics Bangla Street in Phuket, but this place is more family oriented as there’s no public display of half naked girls doing pole dances.  There’s live bands, stalls and souvenir shops all around, and the place gets really crowded at night with you likely to bump into a few familiar faces if you did go to the Angkor Wat.  There’s plenty to see and do, but this place would be one of those nice places to just chill and relax, especially since spirits and beer is cheap. – Photo shows Pub Street 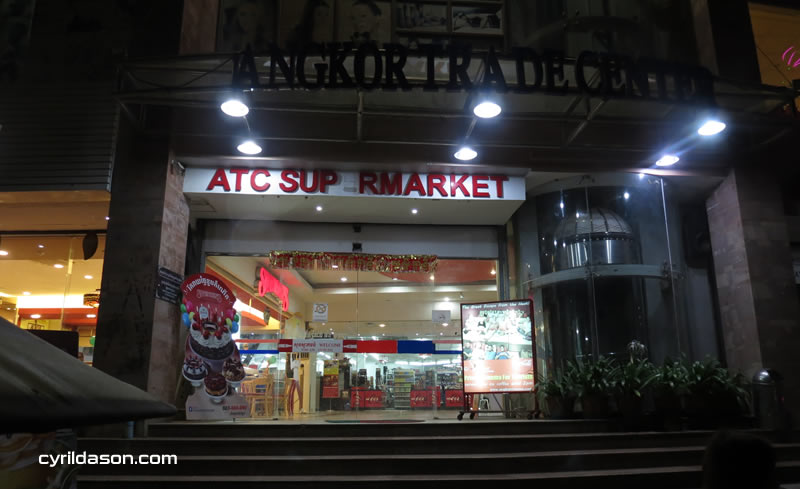 This was Siem Reap’s first shopping mall according to the guide I read, and it feels like a forgotten mall to be honest. The ground floor had some action, especially with The Pizza Company still operating.  However, the top floor was largely ‘dead’ when we arrived there at 8PM. Not worth a visit to be honest. – The photo shows the entrance to the Angkor Trade Center. 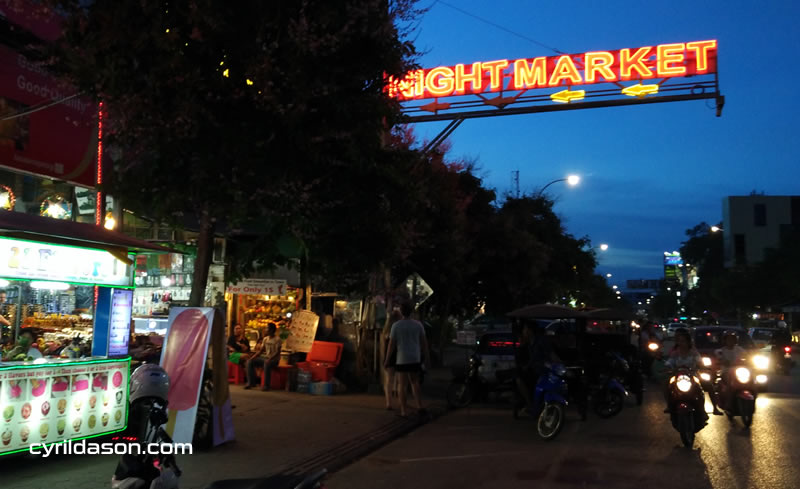 I’m honestly unsure if this is the famed ‘night market’ in Siem Reap because it looks rather different from the one I saw on TripAdvisor.  However, if this is it, then it was largely a disappointment as it was more of a souvenir heaven than a night market. The place is hot and well, crowded. – Photo shows the entrance to the market, well marked. 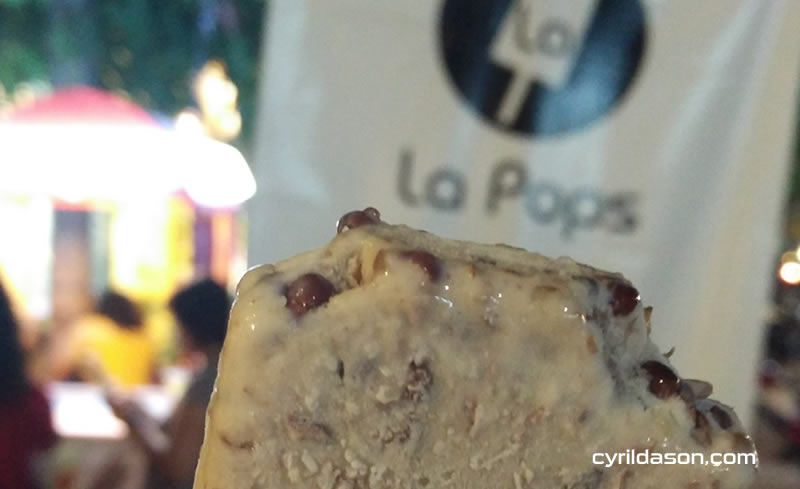 Found strategically around Pub Street, in small kiosk, La Pops ice cream was a very welcoming treat during Siem Reaps hot weather. This hand made ice cream cost USD2 (RM8.70)dollars, and is considered pricey by Malaysian standards. However, it is really good and deserves every bit of mention. – Photo shows one of La Pops ice cream I had. 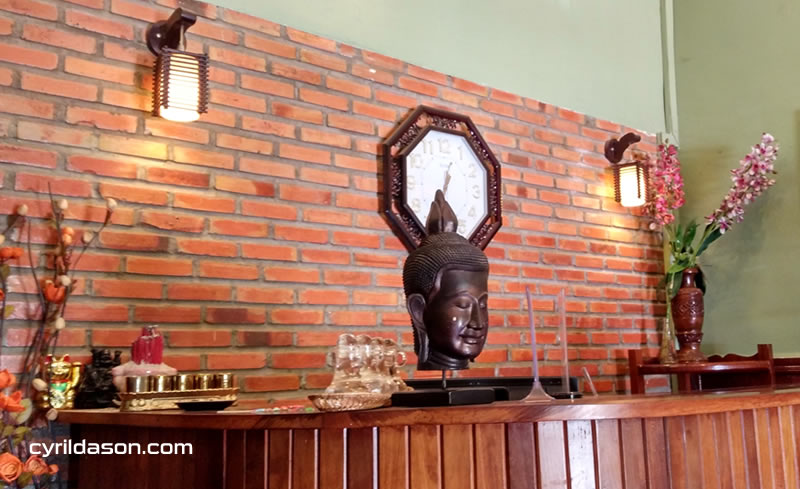 Lemon Grass Garden is a highly rated TripAdvisor massage place in Siem Reap with plenty of good ratings.  However, my experience has been slightly different and disappointing as the massage I got was inconstant with my masseuses seemingly inexperienced.  I went for the whole body salt scrub, and was asked to walk to the next door bathroom in my ‘sexy see through underpants’ they gave, so that was really a first. – Photo shows the reception of the place

Siem Reap honestly isn’t too shabby though there’s nothing much for you to do if you are not into the old temples.  I personally felt the USD37 for entry to the Angkor Wat to be excessive although some would argue they need the income for maintenance of the place.

There’s not much shopping you can do as well in Siem Reap with most of the malls we went being poorly maintained, and the quality of souvenirs especially t-shirts way below the likes of Thailand and even Bali.  Our driver to the airport told us that there’s a huge China investment for a new Siem Reap city nearby which includes a new airport, and hence probably the reason why there seems to be no improvements made to the current city itself. 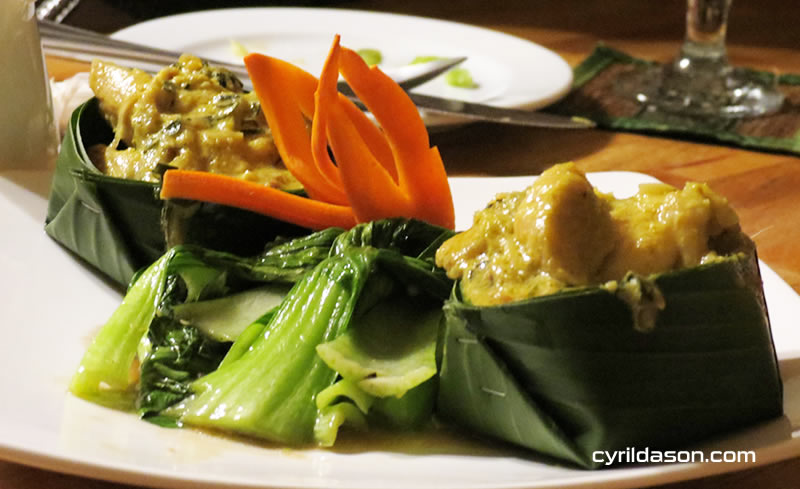 Other than that, I didn’t favour Cambodian food such as Fish Khmer and Amok as it tasted a little like a mixture of both Thai and Vietnamese food, which for me was rather incomplete. Their spring rolls however were good. 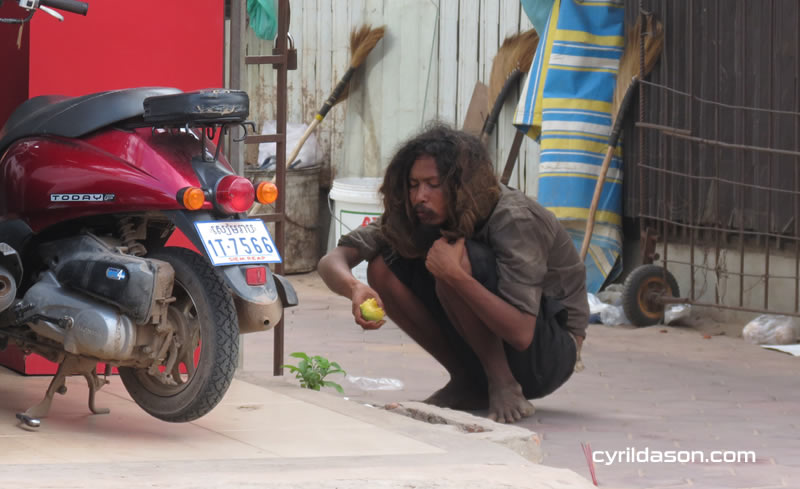 Compared to Malaysia, there seems to be huge gap between the rich and middle income in Siem Reap.  Street beggars which include children, are a common sight when we were there though I must note that the government of Cambodia had issued an advisory asking tourist not give anything to them (the beggars) to ensure they discontinue their ways. – photo shows a barefoot man I saw while walking the streets of Siem Reap.

All that aside, it was an enjoyable trip, and maybe in the long future, I would return to Cambodia again, you know, just to eat La Pops.