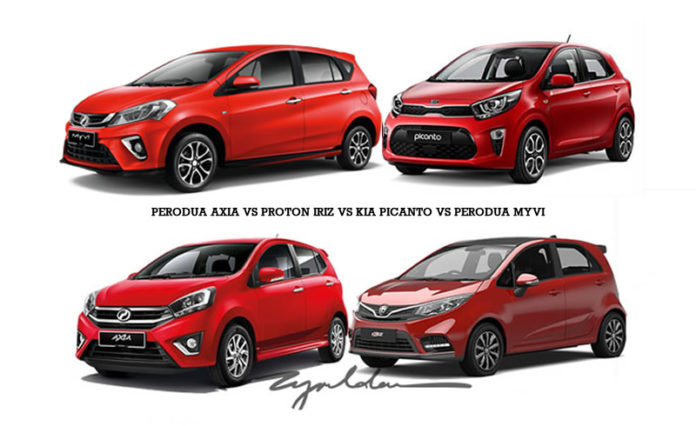 I am putting my sights on small city cars so I’m comparing four cars here which are below RM55K (West Malaysia Price): Axia vs Iriz vs Picanto vs Myvi

You see, after I bought my Nissan Navara in 2016, I’ve come to realize that parking the truck is not easy and that it does consume a lot more fuel when driven in the city. (Do check out my yearly review of the Nissan Navara to know about its fuel consumption, problems and advantages)

That said, having a small city car will not only save cost when navigating the packed city roads, it will also be easier to drive and park. When I say city cars, I technically mean hatchbacks because they are smaller and easier to drive around.

MY COMPARISON: AXIA VS IRIZ VS PICANTO VS MYVI

Before you read on, let me remind you again that the Axia Av vs Iriz Premium vs Picanto Ex vs Myvi H comparison here are all based on the pricing of the car in Sarawak.

This is due to the fact that I am not wiling to spend more than RM55K on a new ride after I bought my Navara. I just need a small car to get me from point A to point B.

Both top ranges of the Picanto and Myvi, namely the Picanto GT and Myvi Advance are therefore omitted from this comparison because they are priced above RM55K in Sarawak.

With that said, let the comparison begin.

When it comes to physical looks, the KIA Picanto wins hands down. I love how compact the car looks. In white, it looks amazing and the limited edition GT version looks very sporty. 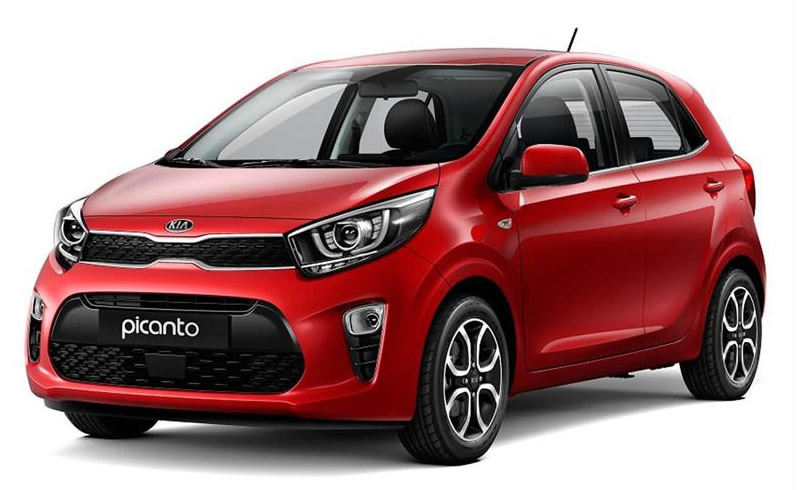 The Perodua Axia Advance hasn’t change much over the years and has a much preferred look if compared to the Proton Iriz. I don’t mind the Iriz’s front, but the rear remains one of the ugliest for a car in my opinion.

The new Myvi (Myvi 2019) is a looker, but the KIA Picanto takes this one slightly because it looks more compact.

Going inside the cars interior leaves the Axia out of the equation. Axia presents a rather simple interior which looks cheap in my opinion. This means only the Iriz, Picanto and Myvi is compared

I dislike the chrome touch in the Picanto, leaving the Myvi and Iriz to fight it out in terms of practicality and looks.

Overall, I prefer the Myvi’s dahsboard layout because its more digital and modern.  However, since the Myvi H doesn’t come with a LED 7-inch multimedia screen, it looks rather plain and hollow. This slants me to the Proton Iriz.

All four dashboards can be seen below.

When it comes to seating, the Iriz presents better comfort if compared to the rest. The Myvi however is more spacious in my opinion, particularly if you seat in the rear.

The KIA Picanto can cramp up 255-litres within its boot space. The Proton Iriz on the other hand can only take in 215-litres, while the Axia Advance can accommodate 260-litres. The Myvi has the largest boot space at 277-litres. All four cars allow their rear seats to be folded to increase its respective boot space.

That said, it was a close call between the Myvi and the Iriz, but the thanks to the 7-inch multimedia system, and more comfortable seats in the Iriz, the win goes to the later.

Interestingly, the Perodua Axia is the only car which adds on Autonomous Braking System to its safety feature, hence making it the winner when it comes to safety.

Each car tries to impress with the amount of accessories they can offer.

The following are offered in each car:

The Axia and Myvi adds in Anti-snatch Hook, 2 Rear Seat Hooks, and a Solar and Security Tint. As you can see from the list above, the Picanto, Iriz and Myvi are rather complete in the accessories department.  The Iriz however is the most complete care with all the whistles and bells. When it comes to default accessories, it is difficult to choose between the Iriz, Myvi and the Picanto, but thanks to the extra 2 front parking sensors, the Iriz brings this section home. WINNER: Proton Iriz

Fuel consumption in the Axia vs Iriz vs Picanto vs Myvi battle is based on what other sites claim.

According to Perodua’s website, the Axia Advance fuel consumption of the car is 4.63L/100KM, while CarBase says the Myvi consumes 5L/100KM.

Proton’s latest One Fuel Tank Challenge showed that the Proton Iriz 2019 consumes 4.82L/100km. The Picanto was listed as using 6.8L/100KM by CarSifu. Based on those figures, the Axia wins this but that is expected due to its smaller 1.0 engine.

Unfortunately, I have not driven three of the four cars I’m comparing here so I can’t comment which is better.  When driving, I look at the power, insulation and comfort of the car.

I have driven the Myvi since my sister owns one.  I thought the Myvi was a sleek ride in the city and a very comfortable yet quiet ride.  It is easy to drive in town and parking is easy. The auto stop/start is annoying and I usually deactivate it.  When I drive faster, the insulation of the Myvi could be better. Compared to my Nissan Navara, the insulation of the Myvi kind of sucks as I could hear the wind outside when speeding. Handling of the car isn’t great either.

For the other three cars, I have only seen and checked the display units offered during road shows. I will update this section when I do get a chance to test drive all three cars in the future. 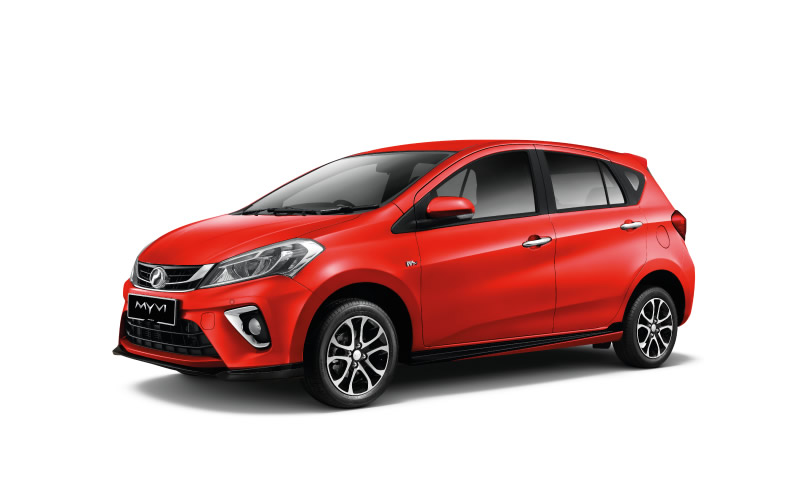 For what’s it worth, this is what I heard: The Proton Iriz and KIA Picanto has better handling than both Perodua Axia and Myvi. Both the Axia and Myvi are also lighter than the other two cars.

Aside from that, I was told both the Picanto and Iriz has better insulation than the Perodua cars.

PRICING: AXIA VS IRIZ VS PICANTO VS MYVI

The price difference is quite significant between the Axia vs Iriz vs Picanto vs Myvi.

Of course the Perodua Axia is the cheapest here, but then again, you get what you pay for.

WHICH CAR IS THE BEST?

I am leaning towards the Perodua Myvi but I have to admit that the Proton Iriz is still a good contender for my money despite its looks.

I love the looks of the KIA Picanto, but it seems that its fuel economy isn’t that great.

Aside from that, my sister (who owns a KIA) also said that spare parts need to be shipped from Korea which means it may be more expensive to repair. This is a huge turn off.

That said, I may likely go for the Proton Iriz because at RM55,000, I can get it’s most complete version, and I think that’s worth a lot more.