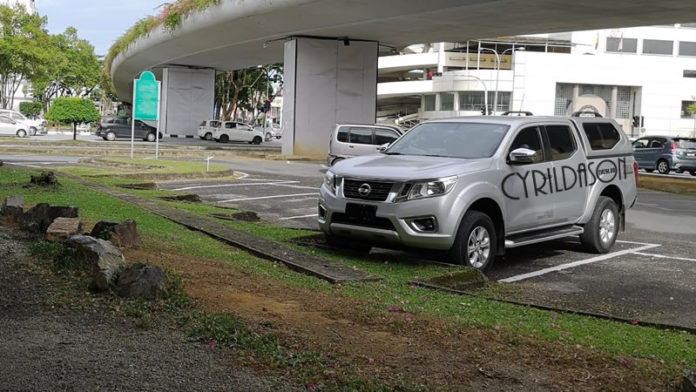 This is my yearly review of Nissan Navara Malaysia. This post was first published on 26th September 2017, a year after I used my Nissan Navara NP300.

However, since I always get the question “how good is the Nissan Navara?”, I decided to keep updating this post for as long as I own the truck, or until a new model of the truck is released.

I first got the my Nissan Navara NP300 on 26 of September 2016, and I drove it out of my dealer with almost no knowledge about trucks.  The only knowledge I obtained was when I wrote about the difference between the Toyota Hilux and the Nissan Navara NP300, and told you the reason why I finally choose the Navara above the Hilux.

Read on to know how good is the Nissan Navara NP300 is over the years I’ve owned one.

Owning the truck in the first year doesn’t bring much problems. It still smells new, and it is a pleasure to drive.

However, a few weeks after owning the truck, I noticed that the paint job wasn’t great.

There was small minute lumps which to me should not appear. I also noticed the truck’s pain job was rather thin, noting that my former Proton Saga BLM had better paint.

I’ve done little modification to the truck except installing a Dashcam and putting on a canopy on the bucket.

READ ABOUT THE DASHCAM I INSTALLED FOR MY NAVARA

During this first year, I’ve driven my truck from Kuching to Mukah, which is a journey more than 462KM by road.  The Navara served me well and was a pleasant ride on the bumpy under construction Pan Borneo Highway.

However, upon reaching Mukah, the alarm light indicator of the Navara started blinking for no reason. It affected the alarm arming sound and was annoying. I was told this was a frequent issue with the Navara and the fix was to remove the negative battery line, leave it for 30 seconds, and reattach back the line.

Another issue I had with the truck was when making a 180 degree turn at a junction. There was a strong squeak. I made a complaint to Nissan which said it was the belting.  It went away after each session, but the problem always returned after a while.

As for it’s maintenance cost, I spent RM490.42 for the first year service as you can see below.

The Nissan Navara service cost within the 1st year:

So far, I must admit that I am satisfied with the truck as it has performed its duties well without much problems.

However, the truck isn’t without it’s shortcomings.

For starters, the paint job of the truck is noticeably poor or thin. The car body scratches easily and this was concurred by a friend who bought the truck at the same time I did. 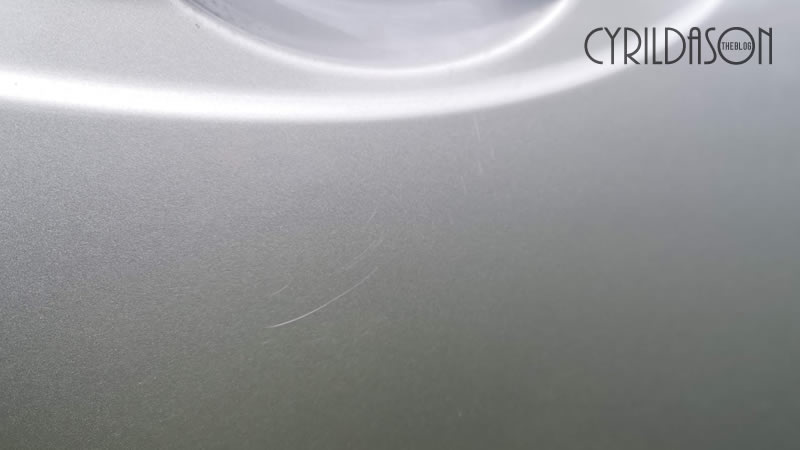 Fuel consumption seemed to deteriorate. I am not sure if its the way I drive, but I am now clocking 8.7KM per liter on Diesel.

Maintenance for the Navara has also gone up as well but it’s largely due to replacement of parts.  I changed my battery in June 2018 after the Nissan service center advised me to do so.  It wasn’t the smartest move to be honest as I paid close to RM477 for the battery.  I was made to understand I could get the battery cheaper outside.

The front tires of the Nissan Navara is also showing signs of wearing out. I reckon I need to change it next year.  I don’t do off road driving and use my truck in the city on a daily basis.

Despite the shortcomings, the alignment issue has finally been resolved, although I still get that screeching sound when I make a 180 degree turn.

The Nissan Navara service cost during this 2nd year:

The Nissan Navara service cost during this 3rd year:

I was forewarned that my next 37,973KM service will be a costly one. It is said to cost almost or over RM1,000.  I declined to service it according to the schedule since the car runs out of warranty after the 3rd year, and I had not used the car as much in recent months.  This was due to the fact my mom borrowed her car and I used her Viva more than my Navara. I should be servicing it as the car exceeds its fourth year (Likely in June).

The tires of the truck also are slowly nearing its limit, so I may need to change the tires as my Navara enters its fifth year of service.  Fuel consumption is recorded at 9.7L for every 100KM.

I hate the paint job of the Navara. It’s so thin, it scratches easy. I’ve got a few visible marks on my truck now. Despite that, another two of my colleagues bought the Nissan Navara after looking at mine.

On 26th September 2020, my Nissan Navara hit it’s fourth year of use. So far there’s not much problem with the truck, but the stickers on the body are starting to peel off which makes it rather ugly.

For some odd reason, I feel the truck alignment isn’t great as well, and the battery needed to be replaced.

Two tires were also replaced and I got them cheap after buying brand new second hand tires from a Navara owner which had his rim changed.

Overall, the Nissan Navara service cost during this 4th year:

This is also the year where my truck was used for some minimal off roads. Nothing too dangerous really. It was just used to go on muddy ground which required me to use the 4WD setting.

The truck next service is January 2021, but I’ll likely skip that date as I am unlikely to hit the mileage. This is my expenditure for the truck during the 5th year:

This is also the year where my truck was used for some minimal off roads. Nothing too dangerous really. It was just used to go on muddy ground which required me to use the 4WD setting. Can see it also helping tow a 5 tonne lorry below.

On 26th September 2022, my Nissan Navara will hit it’s sixth year of use. Since there was a pandemic and restrictions of movement, my truck stayed mostly at home.  Here’s what happened during its sixth year.

Mmy expenditure during the 6th year below:

SO, HOW GOOD IS THE NISSAN NAVARA MALAYSIA?

THE POSITIVES ABOUT NISSAN NAVARA

Driving around in a 4×4 pick-up truck is different than driving a sedan or a small car. While the ride is bumpier than a sedan car, I can’t deny the fact that people seem to respect you more on the road, giving way when there’s a need to squeeze for space.

Anyway, in terms of the engine, the 2.5cc turbo charged engine works well delivering power when needed, and the annoying rev from the engine I mentioned in my Navara NP300 review is something I got used to.

Of course the perks of driving a 4×4 meant that road conditions were a thing of a past as I could easily navigate any type of road without much issue.

On top of that, I don’t have to worry carrying loads nowadays, easily having a huge big bucket at the back to fill with any ‘junk’ I need to bring with the latest being some 50 cement blocks.

PROBLEMS WITH THE NISSAN NAVARA

Of course no car is perfect, and so is the Navara NP300.  Before you read on, please bear in mind that no car is similar, so I may have these issues, but another Navara NP300 may not.

I explained the fix above in my first year review, so scroll up to read it.

Another issue which annoys me is the availability of a squeaking sound when I do a sharp turn.  Based on what I read online, this has something to do with the belting of the truck, but I will let the mechanics look into it when I send my Navara NP300 for its 20,000 check-up.

The basic audio system of the Navara NP300 was actually adequate, so when I upgraded mine to the Nissan (Tan Chong Motors) GPS enabled, 5-inch multimedia system for quite a sum, I was basically wasting money.  This is one of my largest regrets about the truck I bought because for the same amount I spent on the multimedia system, I could have got a better multimedia system from outside, though I was told it would void the truck warranty.

As explained in the first year, the Nissan Navara NP300 does seems to have a rather poor paint job.  In my second year review, I’ve mentioned how my truck has many fine line scratches. They are not major, but uh, they can be seen if you check the body thoroughly.

Another massive problem with the truck is the short-lived magnetic pulley which gives power to the aircond.  In the sixth year, mine got busted and I had to fork out RM1,000 to get it repaired.

Compared to my previous car, the Saga BLM, the Navara NP300 seems to save fuel.

I drive in the city most of the time, and the truck does go out almost every day, covering almost the whole of Kuching City and sometimes the outskirts, with the aircond on.

For all the trouble, including being trapped in countless traffic jams, I spend about RM240 a month on Diesel, which is approximately 160L of Diesel in a month, pretty decent for a truck of 2.5cc.

The on-board fuel indicator estimates my truck consumes 12.5L for every 100km, which is not exactly economical if compared to a normal car, but yeah, good enough for a 4×4. To be honest, I’ve never actually hit the 12.5L/100KM mark.

In 2021, my truck has been recording 11.9 / 100KM, but I do stay in the car while waiting to pick up my daughter on a daily basis, so I guess this figure is inaccurate.

CONCLUSION & WHERE TO BUY

The Nissan Navara NP300 so far has been pretty good, and as you can read, there’s little to complaint about.

Of course it could be better, but not every car os perfect. After a year, I am satisfied with the truck, and I do hope it will last for longer times.

That said, I would still recommend the Nissan Navara NP300 as I think it still performs well after the two years I’d had it.

By the way, if you happen to be in Kuching, and you want to test drive a Nissan Navara or any Nissan car for that matter, the car seller who sold me this Nissan Navara of mine comes highly recommended. He helped explain every detail of the car purchase and loan and the best part is that he wasn’t pushy about it.

If you want his number, DM me on Facebook to get it.

DM ME ON FACEBOOK FOR THE CAR DEALER NUMBER