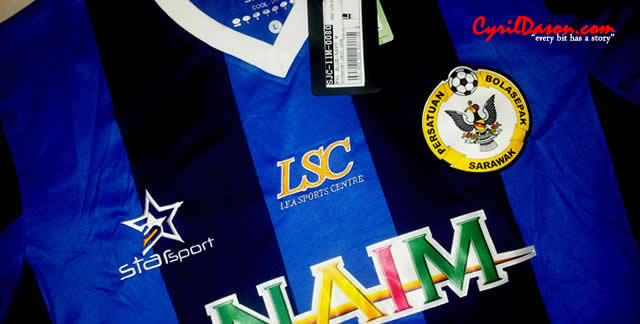 Many of you are like sneering at me just for bringing up the name Sarawak FA.  Heck, I know some friends may just like laugh away when I say ‘Dude, lets come to the stadium watch Sarawak play!’.  Others, unfortunately make jokes about how bad Sarawak a.k.a ‘the Crocs’ is, and how they wouldn’t want to waste time watching ‘schoolkids’ play.

Yep, sad but true.  Sarawak is no giant in football, and the Awang Mahyan, or Alan Vest era may just best be reserved as ‘fond memories’ of the ‘good all days’ of football in Sarawak.  The days when fans flocked the State Satdium in buses from Miri are over.

Seriously, I’d love to shout and say “Hey, the dark ages of Sarawak football is over, and this team will be legen-‘wait for it’-dary!!“, but that’s like making promises I know I can’t keep.

Yes, everyone wants to be behind a successful club. Everyone wants to be someone behind a champion. Everyone wants glory and the ability to gloat they have the best players in the world behind the team the support.  Humans will go for what’s up, and they’ll disperse when they feel the thing starts falling.  We claim to support and are ‘die hard fans’ of some foreign club, but at the very same time say our very own team, which represents about 2 million Sarawakians, play ‘schoolkids football’.  What shame.

We buy jerseys of foreign teams.  We pay over RM200 for an original foreign club jersey, and yet, we are not even willing to fork out 1/4 of the portion for our own local club playing in the Malaysian Super League, what more the original which cost only about RM100.

We say and claim ‘the Crocs’ are in deep problems because they have monetary issues, which are brought upon themselves, and that Sarawak could improved if someone with a certain white hair stepped up and helped the team.

For what I know, every football team in the world needs funding, but no team can be supported by just one man.  Teams like Manchester City will not survive if its stands remain empty.  Real Madrid would be bankrupt if it just made its fortunes from one man, and you expect one man to resurrect Sarawak football?

When tickets sold a mere RM10, and the team relying on sponsors from NAIM and Shin Yang, many still don’t acknowledge that NAIM and Shin Yang are doing their part in making Sarawak football better.  The fact is, many decide to rebuff their sponsorship by saying they dislike the sponsors, and it looks ugly in the jerseys.  They still think Sarawak FA is a failure, and that its doomed to fail.

I think, Manchester United winning the EPL, or Barcelona claiming the Champions League means nothing much to many of us Sarawakians, than having Sarawak lift up a trophy in Malaysia.  Like it or not, we are so ‘silently attached’ to Sarawak, that we are ashamed that they are failing, and hence why we choose to distant ourselves from the team.  However, the Crocs need its fans, and they need it now.  They need the support, both morally and financially.  They need you!

What they do not need however is fans coming to stadiums just to boo them when they start playing badly or loose composure in a game. That action, only serves to demoralize the team, and tell me, who likes to be defeated?

So boys and girls, man and women, why not spend a minimal RM10 for the tickets, and probably another RM5 on a burger and some snacks and come watch Sarawak play.  They may not be the best yet, but you are indirectly making them move towards that positive vibe, and when they do, you have every reason to gloat about how you helped in that transformation.

The Crocs a.k.a Sarawak is in our blood. Lets make them champions!