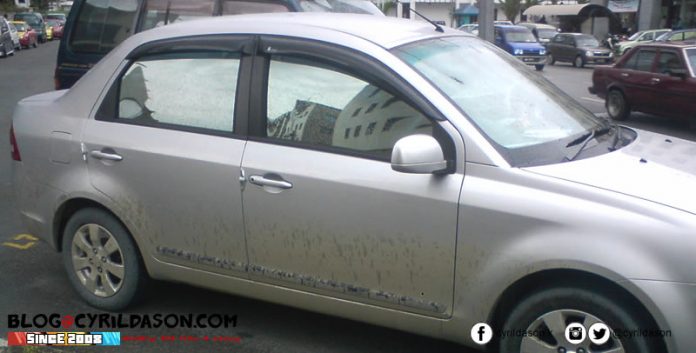 I’ve owned my BLM for almost two years (since Feb 2008), and I must admit that sometime along the way, I had regrets of buying the car. It’s not that the car is not good. In fact, the Proton BLM which I had purchased is fantastic. It looks good, feels good and it does come at a decent pricing. It’s only RM43000, which is a lot cheaper than a Perodua MyVi, and a little more expensive than a Perodua Viva (which is Malaysia’s cheapest car).

While a friend of mine did ask me to consider to buy used cars (in Italian, they call it:”compro auto usate“) just like he did, I declined because I had bad experiences with buying used vehicles. I was actually cheated by a shop in Parit Raja, which goes by the name of H-e-n-g Motors. The owner, prying well on Sabah and Sarawak innocent/new students was very friendly, but after a while, you’d realize his intentions as he would seriously mark up the prices of his goods, and not repair your damaged vehicles properly, resulting in you returning numerous times to seek repair from someone assumed as ‘nice’. Senior in my then university called KUiTTHO (now UTHM) would know how he worked his charm on the juniors, but most of the time, it was too late before the seniors could spread the bad news as seniors are always separated from first year students.

Anyway, if you do know a good car dealer which offers used cars for sale (or in Italian “vendita auto usate“), then purchasing a used or second hand car would actually save you more as you will get the car at a very cheap price. However, before you do purchase a car, remember that you are not making an investment, but rather preparing to spend more money in the future. I never actually thought about this when I got my car, and hence the regret of getting a car too soon.

You see, every February of the year, I have to fork out a few hundred to pay for my insurance. It’s not fun, particularly when you know that the money you have earned is gone just like that. Secondly, the interest rates (which sometime come at as low as 3.0%) is indeed a lot of money. In fact, for the first few years of your loan re-payment, you may end up paying the loan interest for a good two years before you actually start paying for your car! Of course, the interest charged does depend on how long you are re-paying, with those taking longer loans paying more interest. There is also more money to be spent for re-occurring maintainace and safety checks, and all this does not include your fuel which could run to hundreds.  For your information, last month, I spent close to RM500 just on my rear disc break as it showed signs of being worn off.  And don’t forget those tires which cost over RM100 each, which you need to change every 2-4 years!

So, really, if you do not have the money, nor the resources to buy a brand new car, it maybe a good idea to get a used car.  It’s cheap, and it functions like every other car. It gets you places. Financially, used cars might enable you to save and buy something more worthwhile like a house.   Nonetheless, I do hear that used cars overseas are better maintained than those sold in Malaysia and that includes used cars London (or in Italian “auto usate milano“).

So, do think well before committing yourself with a depreciating asset like a car.  You won’t want to regret the decision like I did, despite having a car which is fantastic.